Jamahl Mosley’s 7-year-old daughter initially had mixed emotions about her dad landing his first NBA head-coaching job with the Orlando Magic last year. Jemma Mosley was sad about moving from Dallas, but on the flip side, there was an opportunity to go to Walt Disney World regularly.

And then suddenly, her focus turned to her dad.

“My daughter comes in my room and she’s like, ‘I don’t want to leave!’ ” Mosley told Andscape. “I’m like, ‘But, babe, this is what we’ve talked about, what we’ve prayed about, Daddy possibly becoming the head coach somewhere.’ And she was like, ‘But I thought you would be [in] Dallas.’ I said, ‘But, baby, sometimes things happen this way, it’s what God wants for us.’

Considering Mosley’s road from volunteer NBA player development coach to leading the Magic, there was a lot of depth to the emotions he displayed in front of his daughter.

Mosley, one of seven Black NBA head coaches hired last offseason, was a star player at the University of Colorado, where he scored 1,171 points from 1997 to 2001 and was a 2000 All-Big 12 third-team selection. After going undrafted by the NBA in 2001, the 6-foot-8 forward went on to play professionally in Mexico, Australia, Spain, Finland and South Korea before taking a break in 2005. Afterward, Mosley moved to the Denver suburb of Parker, where he shared an apartment with former Colorado teammate Ronnie DeGray.

During the summer of 2005, Mosley bumped into then-Denver Nuggets assistant coach John Welch, who recruited Mosley when he was an assistant coach at Fresno State. Welch invited Mosley to come to the Pepsi Center to voluntarily help with player workouts with Carmelo Anthony, Kenyon Martin, Nene, Earl Boykins and Linas Kleiza.

“He had a great passion about him and energy for the game. Everyone felt highly about him,” said former Nuggets assistant general manager Jeff Weltman, now president of basketball operations for the Magic.

Mosley became so much of a welcome regular that then-Nuggets head coach George Karl gave him money to help him stay afloat. Mosley didn’t have any source of income at the time and was driving a 1994 Chevrolet Caprice to the Pepsi Center. 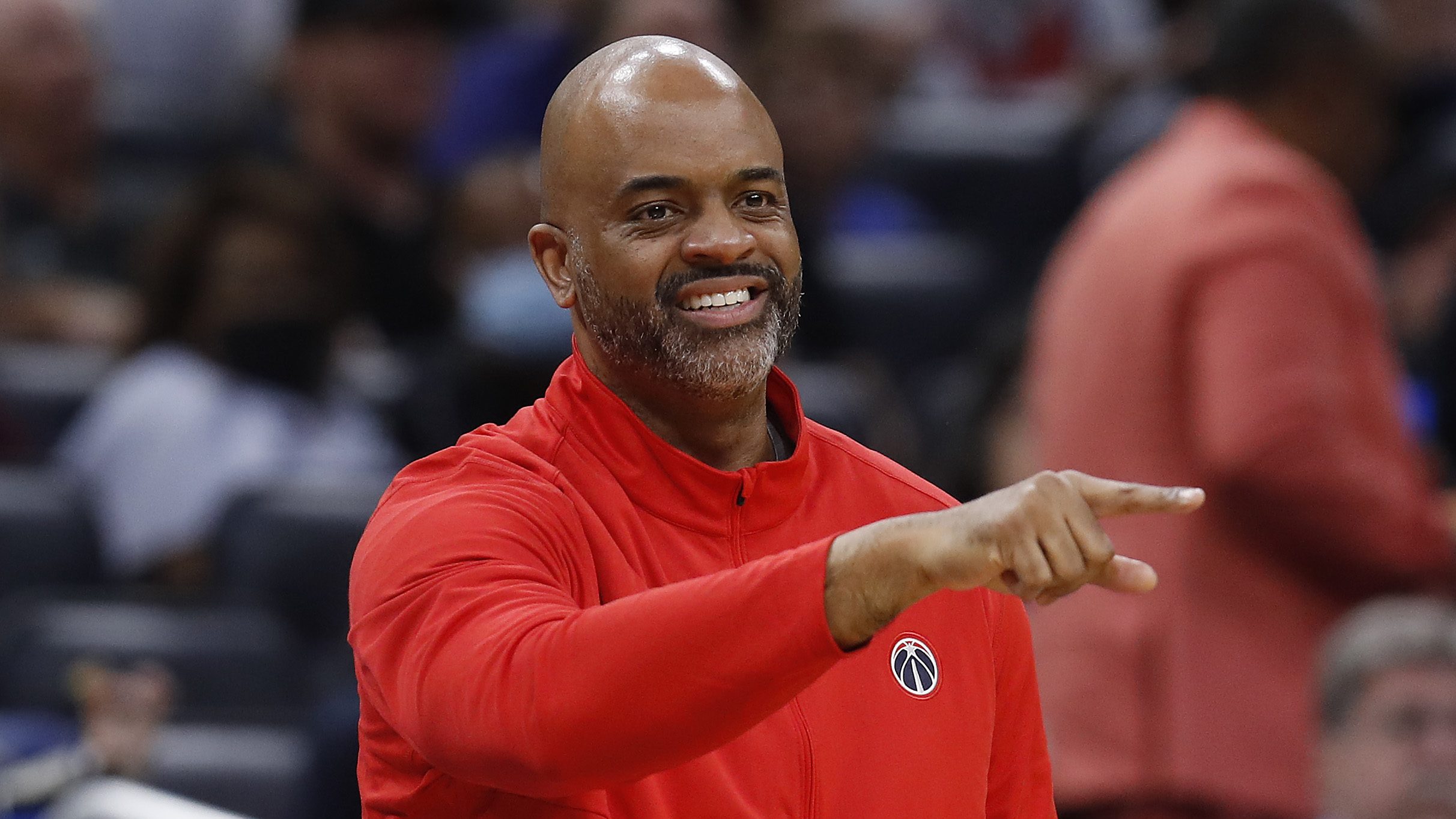 When asked why he helped Mosley, Karl told Andscape: “I always liked mentoring young coaches. Don Nelson, Doug Moe and Del Harris mentored me. Coach Mosley had a certain energy about him I appreciated. I’m thrilled to see him growing in his career.”

Karl and the Nuggets also allowed Mosley to attend coach’s meetings despite being a volunteer from 2005 to 2007. Then-Nuggets player development coach Tim Grgurich also joined Welch and Karl in having a strong motivational impact on pushing Mosley into coaching. Mosley considered returning to playing professionally but ultimately went the coaching route.

Mosley became an assistant coach with the Nuggets under Karl from 2007 to 2010. He joined the Cleveland Cavaliers as an assistant in 2010 under head coach Byron Scott for three seasons and Mike Brown for one.

“Byron was just solid, man. He was so good to me,” Mosley said. “He just gave it to you straight, talked about the work ethic, talked about what it took, what he had been through, his experiences, and he was a great factor just to figure out what it was like being a young African American coach in the league early on. That was my first experience of that from a head coach, and then Mike Brown took over, came over on my last year in Cleveland.”

In 2014, Mosley took a job as an assistant under then-Dallas Mavericks head coach Rick Carlisle. Mosley worked with the Mavericks from 2014 to 2021, eventually becoming Carlisle’s top assistant. Mosley said that Carlisle taught him how to be “very transparent in everything that happens.”

“He always said, ‘Here’s what’s happening with the ownership and media, and here’s what you need to see,’ ” Mosley said. “And when you start to recognize those things and you’re doing some of those things as an assistant, you’re recognizing the relationships and you’re talking to people. Then you realize the only thing different in the head-coaching position is that it’s all coming to you.

“That’s when I recognized I could be a head coach, when it was dealing with a lot of that stuff. I was seeing, as the No. 1 assistant, you started to recognize it’s already coming to you.”

Mosley landed his first head coach interview in 2019 with the Cavaliers but didn’t get the job. He was surprised to get the opportunity, as he wasn’t thinking about being a head coach at the time. Another strength of Mosley was that he had a good rapport with the players, most notably Mavericks All-Star Luka Doncic.

“When I got the first call for Cleveland just to interview, it was weird because I was thinking in my mind, ‘I’m just being me as an assistant coach,’ ” Mosley said. “So, I thought they were doing me a favor to get me an interview. But it was a real interview. Sitting there, conversation, questions. What would you do? How would you do this? And it was real, and then from there, it went well, I did a very good job. And the next year I talked to New York and a couple other places.”

About a year ago, there was a lack of optimism for Black assistant coaches who were aspiring to be head coaches. There were only seven Black NBA head coaches in a league that was about 75% Black. The fact that then-Minnesota Timberwolves associate head coach David Vanterpool was passed over when the job became open in February 2021 raised an alarm as well.

Mosley tried to stay optimistic despite the statistics and believed his door would open when it was supposed to.

“I tried not to look at the numbers as much, because every year everybody’s like, ‘There are no openings,’ ” Mosley said. “And then all of a sudden there’s eight. I always looked at it like, where I’m supposed to be, I’ll be. If I’m supposed to be an assistant coach for the next five to 10 [years], I’ll be an assistant coach, but I’ll be the best version of that, that I can be. That’s the way I always looked at it. I never looked at it like, ‘I’ve got to get my shot,’ because I think when you start doing that, you lose sight of what you’re really supposed to be doing, in my opinion.”

The tide changed last offseason when seven of eight NBA head coach openings were filled by Black coaches. The Mavericks job actually opened when Carlisle took a head-coaching position with the Indiana Pacers, a decision that was scrutinized due to the franchise’s lack of diversity in its search. While Mosley was a candidate in Dallas, the Mavericks hired their former star guard Jason Kidd instead.

On July 11, 2021, Mosley finally got his dream position when he landed the Magic coaching job. The NBA currently has 14 Black head coaches, including Sacramento Kings interim head coach Alvin Gentry.

“I saw his hiring as a great opportunity for him and for us,” Carter told Andscape. “It was his first time being a head coach. He came from a winning culture, so he knows exactly what it takes. When I saw the reports about the amount of Black head coaches being hired, I thought it was phenomenal and a good step in the right direction for this league.”

Said Weltman: “We met with him live and on Zoom and he was impressive both times with his expertise on the game. Some of the people that hadn’t met him before got to know him. He just has a charisma about him and a way to connect with people. He really cares about people and is interested in people.”

“I saw his hiring as a great opportunity for him and for us. When I saw the reports about the amount of Black head coaches being hired, I thought it was phenomenal and a good step in the right direction for this league.”

The young and injury-plagued Magic finished an Eastern Conference-worst 22-60 this season. Mosley said his biggest frustration was not having a full roster or a healthy lineup in which he could have mixed youths and veterans for most of the season. Mosley does have some talented young players in Carter, Cole Anthony, Franz Wagner, Mo Bamba, R.J. Hampton and Jalen Suggs, who are all age 23 or younger. Mosley did find some positives through all the Magic’s struggles.

“The things I would take away from this year would be the importance of time management on and off the court,” Mosley said. “The continued relationship-building with each player and staff member, and importance of constant communication with players, coaches, support staff and front office. The biggest triumph was seeing the growth of these young players. Seeing their confidence level soar knowing that they belong and can have a level of success with the work that we have put in.”

Another positive for Mosley is that his children — Jemma and sons, C.J. and Chance — have taken numerous trips to Disney World.

“They did go to Disney World,” Mosley said. “Maybe five-plus times they’ve been there. They’ve done it.”