Seventy-five years ago, on April 15, 1947, Jackie Robinson made his major league debut. The Brooklyn Dodgers rookie was famously vetted by general manager Branch Rickey. But Robinson wasn’t the only man Rickey considered as he thought about breaking baseball’s color line. The idea had been brewing for years, in fits and starts, and the team looked at several Latin American players, Negro League stars and even flirted with the creation of an entirely new Black league, possibly as a scouting tool for integrating the big leagues.

Even a decade earlier, there was evidence that Rickey was starting to think about what it would take to integrate major league baseball. In 1936, when Rickey was general manager of the St. Louis Cardinals, he reprimanded star pitcher Dizzy Dean for saying he’d only pitch for St. Louis if Bill DeLancey was catching. “[Y]ou will wear your uniform constantly … pitching your head off when called upon regardless of who the catcher might be, Black or white, young or old,” he told Dean, according to Baseball’s Leading Lady: Effa Manley and the Rise and Fall of the Negro Leagues, a biography of Newark Eagles co-owner Effa Manley.

Soon after he moved to Brooklyn, New York, in 1943, Rickey met with the Dodgers board of directors and proposed expanding the team’s scouting efforts, including looking at Black players. (Other clubs were cutting back on scouting because they thought all the good athletes were involved in the war effort.) According to an account by Arthur Mann, Rickey’s assistant, the Dodgers general manager later met with George McLaughlin, president of the Brooklyn Trust Co. and a major financial backer of the team.

“We are going to beat the bushes, and we will take whatever comes out,” Rickey said. “And that might include a Negro player or two.”

“I don’t see why not,” McLaughlin responded. “You might come up with something.”

Rickey had the Dodgers’ Tom Greenwade scout games between Negro Leaguers and white barnstorming teams — as did Wid Matthews and George Sisler, both of whom were impressed by Robinson’s play with the Kansas City Monarchs, and Clyde Sukeforth, who later arranged the meeting where Rickey told Robinson he planned to sign him to play minor league ball in Montreal. Rickey was a master of scouting systems — the big league farm system was largely attributable to him.

At the time Rickey began his search, the best players in Black baseball were Josh Gibson, Satchel Paige and Monte Irvin. But Dodgers scouts thought Gibson and Paige were too old and that Irvin wasn’t ready for the burden of breaking the color barrier. The player widely regarded to have the most upside was Roy Campanella, who was only 23 in 1944.

Rickey, a minister’s son, told Mann that Gibson’s off-the-diamond life was “not encouraging,” according to Mann’s 1957 biography of Rickey. The Dodgers executive had similar concerns about Paige. 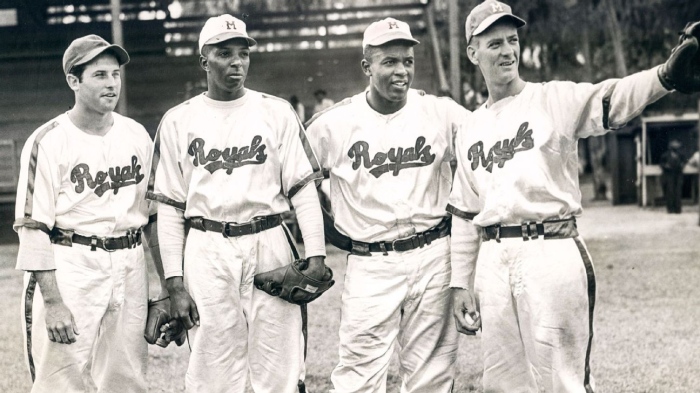 John Wright had the talent, but couldn’t follow Jackie Robinson to the DodgersRead now

In a sense, the Dodgers, Washington Senators and Philadelphia Athletics were taking small steps toward racial integration by scouting and signing Latino ballplayers before and during World War II. For instance, Cuban outfielder Bobby Estalella debuted with the Senators in 1935 and was with the Athletics from 1943 to 1945. According to sportswriter Shirley Povich, Estalella was often “ducking dust-off pitches from guys who didn’t cotton to his particular pigmentation.”

Brooklyn had first became aware of Luis Olmo when he was a 19-year-old with the Criollos Caguas in 1938-39, the first season of the Puerto Rican Winter League. Seda advised Branch Rickey Jr., then farm director for the Dodgers, to sign Olmo. Right before the young player boarded a ship to the States, Seda fired off a telegram to Rickey Jr. which read: “Good ballplayer named Luis Olmo arriving on Barranquilla. Stop. Get him. Stop. — Jose.” Though Olmo looked like New York Yankees star Tony Lazzeri, the outfielder was still sometimes subject to ethnic slurs on the field, and beanball pitches.

Once the elder Rickey arrived in Brooklyn, his sources began to tell him about Cuban shortstop Silvio Garcia, who had a darker complexion than either Estalella or Olmo. The Dodgers played in the American Series in Cuba in 1942. Garcia batted .381 (8-for-21) against Brooklyn pitching and impressed with his glove.

Dodgers manager Leo Durocher considered Garcia the leading candidate to break the color barrier for Brooklyn and MLB. Some in the organization believed his being Latino like Estalella and Olmo would make him more acceptable to fans, teammates and opponents.

Because Garcia played in Mexico in 1943, Rickey could sign him without offending Negro League owners (though history later proved this was not a major concern of his). Greenwade went to Mexico to watch Garcia. The interest was so serious that Brooklyn opened a bank account in Mexico and hired a lawyer there should negotiations ensue. 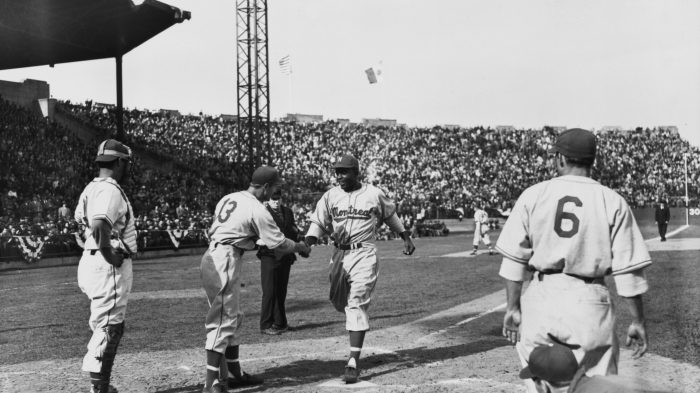 Rickey tried to keep many of the details of the trip secret. While south of the border, Greenwade met with Negro League veterans Theo Smith, Quincy Trouppe and Burnis “Wild Bill” Wright to throw opponents off the scent. But Rickey was also likely worried about blowback from racist American fans.

Jorge Pasquel owned the Veracruz ballclub and was president of the Mexican League. Garcia was a popular player who filled the stadiums and Pasquel tried to keep Greenwade and Garcia separate. According to a 1946 account in the Springfield Leader, Pasquel held a meeting with Greenwade in which he took out a pistol and placed it on the desk between them.

Despite the elaborate preparations, the Dodgers scout wasn’t impressed with Garcia, reporting that, “He couldn’t pull the ball. He was a right-handed hitter – everything went to right field,” according to an account he gave The Sporting News in 1956. He thought more highly of Campanella, at the time a young catcher for Monterrey.

Rickey liked Garcia more than his scout did. In winter 1944, Walter O’Malley, the Dodgers lawyer and a minority owner at the time, visited Cuba with a letter of credit for $25,000 to sign Garcia. But Garcia had reportedly been drafted into the Cuban military, making him ineligible to sign.

Still, Rickey remained interested. According to Cuban baseball historian Edel Casas, Rickey interviewed Garcia in Havana in 1945. Like he would later do with Robinson, Rickey asked Garcia what he would do if an opposing ballplayer attacked him because of the color of his skin. “I kill him,” Garcia said. Wrong answer.

With Garcia no longer under consideration, Brooklyn’s list included: Campanella, a catcher with the Baltimore Elite Giants; Lorenzo “Piper” Davis, a first baseman with the Birmingham Black Barons; Gibson, catcher for the Homestead Grays; Sam Jethroe, who was center fielder for the Cleveland Buckeyes; Grays first baseman Buck Leonard, who was 38 in 1944; Cuban outfielder Orestes Miñoso (later nicknamed “Minnie” in the U.S.), who was only 19; the ageless Paige; and Robinson.

Of those candidates, only Robinson fulfilled Rickey’s prerequisites that the first Black big leaguer be a military vet, a former collegian and a talented player. On that last count, Robinson was one of the least proven — a midlevel infielder with baserunning speed.

Many Black sportswriters believed Irvin would be signed first. Irvin was a four-year Negro League veteran. In two of his seasons with Newark, the outfielder used the name “Jimmy Nelson” to preserve his college eligibility at Lincoln University, a historically Black college. He had won a batting title and was a veteran of the Battle of the Bulge.

Rickey reached out to Irvin in the spring of 1945. “I’d just gotten out of the service after three years and I hadn’t played baseball at all,” Irvin recalled years later. “I told the Dodgers I couldn’t sign right away, that I wasn’t ready.”

That diverted Rickey’s attention back to Robinson. While Robinson was not the star Irvin was, he had played college sports against white players, including football, a contact sport. He was also a basketball and track star. He was a Californian, experienced in racially integrated situations. And Robinson was a married churchgoer.

After Robinson’s second season with the Dodgers, Rickey attempted to sign Irvin, then 29, to a minor league contract. Newark would not release its star without compensation. A year later, in 1949, the New York Giants signed Irvin after paying Eagles co-owner Manley $5,000. The following year, they brought up Willie Mays to join him in their outfield. (At one point in the early 1950s, New York featured an all-Black outfield of Mays, Irvin and Hank “Machine Gun” Thompson.)

Years later, in an interview for the Hall of Fame, Irvin said, “It shows you how much more Rickey knew than a lot of us knew. Jackie was the right person.” Irvin said he knew Campanella was considered, as well as his Newark teammate, pitcher Don Newcombe. “I would have probably selected Campanella, who had played in the league almost 10 years, was a great catcher who could run, hit and field.” 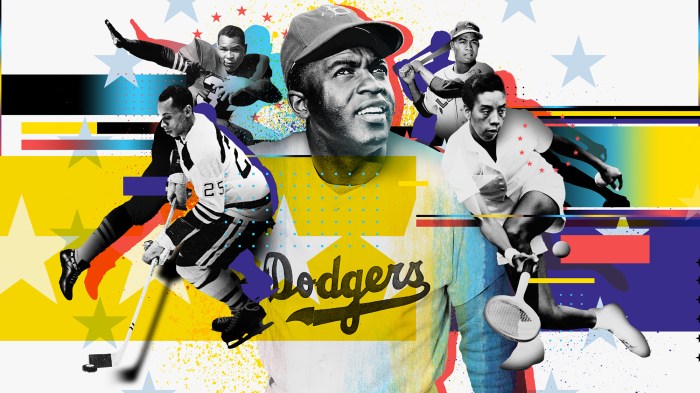 Of course, Campanella joined the Dodgers in 1948, a year after Robinson, and became a three-time National League MVP before an auto accident in 1958 resulted in him using a wheelchair. When the Dodgers finally did sign Newcombe, they didn’t compensate Newark.

In May 1945, Rickey invited 30 journalists, some from the Black press, to his office to announce plans to form the United States League, a new all-Black circuit. He dismissed the existing Negro Leagues and their teams as loosely organized: “… none of these is a member of any league whatever in the sense of a ‘league’ in organized baseball.” But Negro Leagues owners thought the finances of the new league were questionable and some historians view it as an experiment to assess Black talent in advance of integration.

Regardless, in October 1945, Rickey announced the signing of Robinson. After a stint in Triple-A Montreal, Robinson made his celebrated debut on this week in 1947. His career on and off the field confirmed Rickey’s faith in his character and abilities. (Robinson was a better big league player than he had been a Negro Leaguer.) How some of the other candidates would have fared is something we’ll never know.