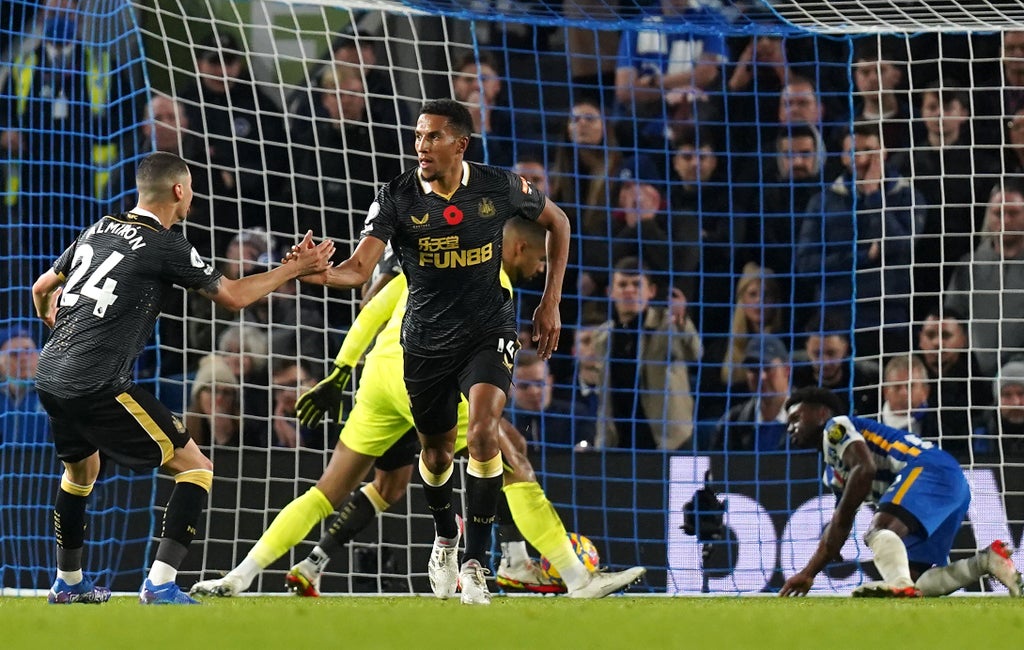 Brighton had taken the lead from the penalty spot halfway through the first half, with Leandro Trossard sending the goalkeeper the wrong way.

Against the run of play, Newcastle struck a leveller in the 65th minute when the ball fell to Hayden, who volleyed into the back of the net.

Brighton goalkeeper Robert Sanchez was sent off at the death for impeding Callum Wilson, with defender Lewis Dunk forced to briefly take the gloves and go between the sticks, yet the Seagulls held on.

Former Bournemouth manager Howe was in the crowd at the Amex Stadium as the Magpies edged closer to making an appointment.

The 43-year-old was pictured sitting in the stands next to Amanda Staveley, whose consortium bought out Mike Ashley last month, with Newcastle understood to have agreed a deal in principle with Howe.

Tariq Lamptey had a cross from the right in the fifth minute headed goalwards by Trossard but it was a relatively straightforward save for Karl Darlow.

Brighton took the lead in the 24th minute from the penalty spot, Trossard sending the ball over Darlow and into the back of the net for his second goal in as many matches.

The decision was originally not given for a foul on the goalscorer by Ciaran Clark, and VAR took an age before sending referee David Coote to the monitor ahead of the final decision.

The Seagulls almost had another chance when Joel Veltman’s cross was just ahead of Lamptey.

Just before the half-time break, Matt Ritchie had lost Solly March at the far post after a cross from Lamptey, but he was slightly ahead of the ball and it hit his back, with Newcastle able to clear.

Trossard, who had been the focal point for most of Brighton’s attacking threat in the first half, started the second in the same fashion, forcing Darlow into a low save at the near post just one minute after the restart.

Newcastle had their first shot on target in the 55th minute, when Ritchie tried his luck from range and it hit a Brighton player before being saved by Sanchez.

Against the run of play, Newcastle found an equaliser in the 65th minute with their first real chance of the game.

Ritchie and Allan Saint-Maximin combined down the left, with the wing-back sending a cross in. Clark managed to head the ball down before Hayden volleyed home. His well-struck shot flew past Sanchez and a defender on the line.

After taking off Lamptey in the 75th minute, Brighton lost a lot of their attacking threat, and they struggled to string together the same passes while the visitors noticeably improved following the equaliser.

In stoppage time, Sanchez was sent off for preventing Newcastle forward Wilson from completing a clear run on goal.

The Seagulls had already made all their substitutions so Dunk donned the goalkeeper’s jersey and gloves for the remainder of time added on, but Newcastle were unable to find the winner and remain without a victory in 11 games.