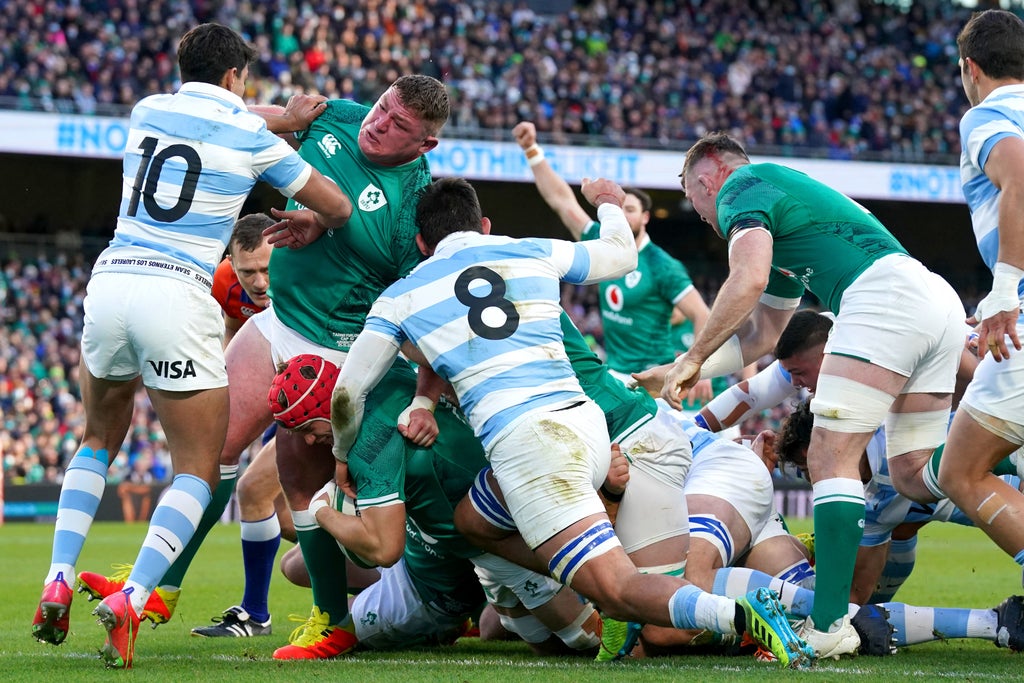 ‘Reset the button’: Farrell not allowing Ireland to get carried away after New Zealand win

Ireland are taking on Argentina today in their final match of the autumn international series hoping to back-up that stunning performance against New Zealand last weekend with another victory. Ireland thrashed Japan 60-5 before their 29-20 win over the All Blacks, and have the chance to make it a clean sweep of wins from their three Test matches in Dublin here.

But Argentina arrive hoping to catch Andy Farrell’s side out, a danger felt by Garry Ringrose, who has pointed to history to back his belief that they simply cannot “hang a hat on” their recent success over the All Blacks. Argentina stormed past Italy last weekend and ought to provide another tough test.

Scrum-half Conor Murray comes in for the injured Jamison Gibson-Park and partners Munster teammate Joey Carbery, who replaces injured captain Johnny Sexton. Centre Robbie Henshaw, an ever-present for the Lions in South Africa, is back in place of Bundee Aki, while Ulster winger Robert Baloucoune bags a second cap on the right wing as Andrew Conway drops out. Follow all the action from the game below, live.

Bad news for Ireland in the wake of that try – James Ryan has been taken off receiving treatment and Ireland’s captain will take no further part.

How about that for a finish from Caelan Doris? After Baloucoune makes another burst, Doris is invited on a short line from deep and into two Argentina defenders the number eight charges.

He is absolutely rocked in a collision that reverberates around the Aviva, Pablo Matera and Francisco Gomez Kodela giving Doris some free chiropractic work to the ribs, but somehow maintains his feet, regathers himself and goes again into the space that the pair have left.

An apparently winded Doris manages to dot down and another Joey Carbery conversion further widens the Ireland lead.

Can Ireland capitalise before half-time on that Argentina near miss? That’ll help! An outstanding claim from James Lowe as he chases a kick and wins it back for Ireland.

On the other side, Robert Baloucoune gets his first chance in the open field and he nearly burns Lucio Cinti on the outside.

DROPPED WITH THE LINE IN SIGHT! After brother Santiago shimmies through a gap after taking a high ball to make an initial burst for Argentina, Mateo Carreras teleports into space beside a ruck with Ireland’s guard and bodyguard out of alignment.

Carreras bursts away from Conor Murray with another of those nasty exaggerated steps, but an immense recovering half-tackle rom Andrew Porter just knocks him off stride. now awkward gait knocks the ball free of his fingertips, and the chance is gone!

To rub salt into the wound, Carreras has done himself a mischief, too, and it close to tears as he is forced from the field with an apparent leg injury. That means a debut for Facundo Cordero.

This is bang in front, 40 metres out..missed again! Pushed to the right this time! How costly might those misses be if it remains tight?

This has been an oddly uneven first half that hasn’t quite burst into life. Julian Montoya puts a good shot into the chest of Garry Ringrose as the centre hunts a gap after Ireland win the ball back.

Two phases later it is Montoya again! This time the Argentina captain is over the ball sharply as Andrew Porter is isolated, and there are myriad penalties that Matt Carley can choose from there. Holding on and a neck roll are the two most obvious – Argentina to have another shot at goal. It’s a simple one, but after that last Emiliano Boffelli miss the ledger isn’t being updated just yet…

More lineout pressure from Ireland but this time Peter O’Mahony lands on the wrong side after competing, taking out both the jumper and the lifter and duly penalised.

That’s an excellent kick from Joey Carbery. Ireland had looked to be playing a little aimlessly inside their own territory but the fly-half produces a low skidder that skips over the Aviva Stadium surface some 30 metres after landing and into touch just outside the Argentina 22. Not quite a 50:22 but a switch of field position.

Inexplicable! A clean enough connection but, like a misread putt, this starts left and stays left. That’s a bit of a shocker from the big-booted Boffelli.

Beefy enough stuff from Argentina’s front row, who don’t quite draw a penalty but do create space for first Tomas Cubelli and then Pablo Matera to explore around the fringes. Argentina make further progress and this time Matt Carley has seen an offence, Andrew Porter failing to clearly release.

Just right of the uprights and inside the 22 – this should be no bother for Emiliano Boffelli.