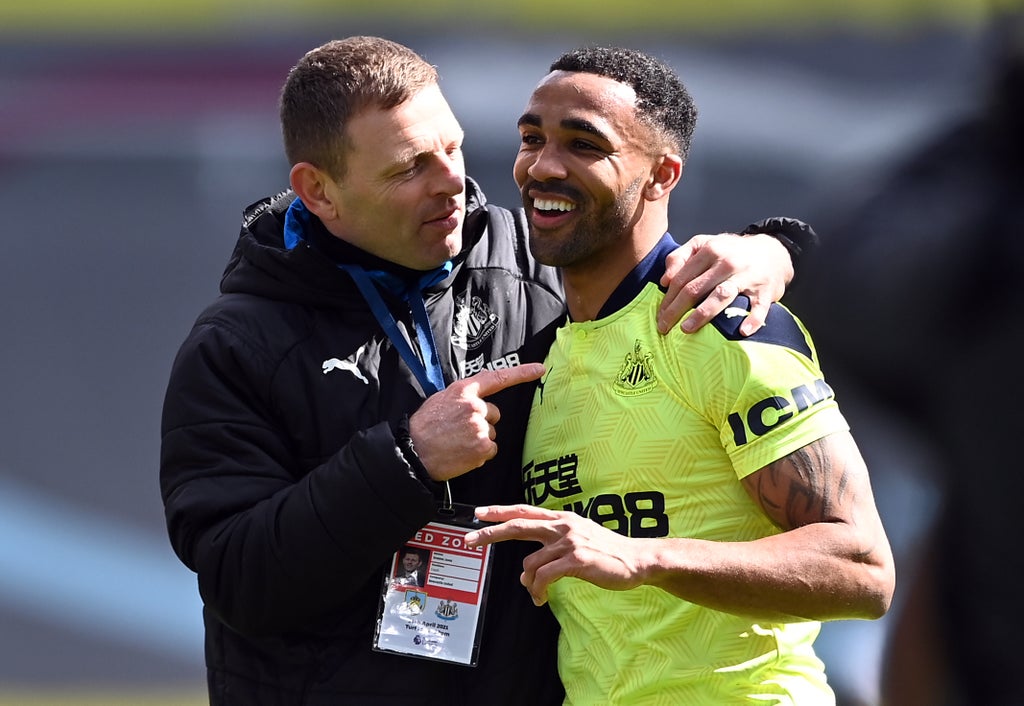 Jones will be in the dugout at Selhurst Park on Saturday after Steve Bruce’s tenure ended on Wednesday following last weekend’s 3-2 home Premier League defeat to Tottenham.

After Amanda Staveley’s Saudi-backed takeover was complete, there was a euphoric atmosphere at St James’ Park for a first match of a new era with Newcastle racing into the lead after just two minutes through Callum Wilson.

Eventually, though, their all-too-familiar shortcomings this season were exposed again as Spurs responded to lead 3-1 by half-time.

Jones has been asked to take charge of the next two Premier League games as the search for Bruce’s successor continues.

The Gateshead-born former Luton boss expects nothing else other than full commitment when his side run out at Selhurst Park looking for a first league win.

“I think the physical stats (of the opening minutes against Tottenham) would be off the Richter scale it was sustaining it and that was the key,” said Jones. “I speak a lot about consistent football behaviour and consistent football performance, so working towards that is the truth.

“Obviously, results don’t reflect that at the minute, but I work with the lads day in, day out.

“The lads have got a desire to get that. They are not difficult in any way, they listen, they try to work, we try to put it into practice, it doesn’t come overnight.

“We are eight games into the season and it needs to come sooner rather than later.

“If we could bottle it up, I don’t think we would be second bottom of the Premier League, we would probably be top.”

Jones added: “I spoke to them Wednesday after it was announced. Just said to them ‘it is a clean slate with everything that has gone on before and we start again’.

“When the team is selected, the players will have picked themselves or not in some cases, so that has been the culture of the week.

“I like where the boys are both mentally and physically, so we will see what tomorrow brings.”

Former Shakhtar Donetsk and Roma boss Paulo Fonseca has emerged as a leading candidate for the Newcastle job, with ex-Bournemouth manager Eddie Howe and former Borussia Dortmund coach Lucien Favre others said to be under consideration.

Jones joined the staff at St James’ Park in January having worked successfully under Belgium boss Roberto Martinez and also spent time as part of Gareth Southgate’s England staff for the Euro 2020 finals during the summer.

Whatever the future holds for the club following the reported £305million takeover, Jones believes a change in mindset across all levels can now help Newcastle move forward.

“I know what elite looks like. I had it with Roberto for a long, long time and I have seen it with Gareth, with (England assistant manager) Steve Holland and (assistant coach) Chris Powell in the summer,” Jones said.

“I know what it looks like and what it can bring you. Ultimately, that is what you want to get through the door in every single aspect of the club, every single job on the pitch and off the pitch.

“Hopefully with the new owners, that would be the long-term strategy.”

Jones remains determined to help in the transition of his boy-hood club in whatever capacity.

“I have spoken to (co-owner) Mehrdad (Ghodoussi) and I have spoken to Amanda and I have had assurances on my long-term future,” he said. “But my short-term thought process is only on what I can affect – and that is Palace and then next Saturday.

“It is important for everybody going forward that I am at the football club and give them my genuine, honest, best help I possibly can in order to move the club forward.

“That is what I am going to continue to do in whatever role I am given – starting with Crystal Palace.”