INGLEWOOD, Calif. – The conversations occurred often during the run-up to the 2012 NFL season, while Raheem Morris was trying to get his bearings and Washington Redskins head coach Mike Shanahan was determined to help.

Fired after three seasons as the Tampa Bay Buccaneers’ head coach, Morris moved on to coach defensive backs under Shanahan. But Shanahan had bigger plans for Morris than confining him to the team’s defensive backfield.

Believing Morris’ best was still ahead of him, Shanahan sought his input on myriad topics and encouraged Morris, whose background is on defense, to become immersed in the team’s offense. Expanding his knowledge about that side of the ball, Shanahan stressed, would help Morris become a better defensive coach and serve him well if he received another opportunity to lead an organization.

With Washington, Morris regained his groove, learned a new way of looking at the game and helped Shanahan’s cadre of young offensive assistants – all of whom now run their own shops in the NFL, including Shanahan’s son, Kyle – develop an innovative offense that provided the foundation for one of the club’s best seasons in more than a decade. Washington proved to be the right landing spot for Morris, who got the soft one he needed.

On Sunday, Morris, the Los Angeles Rams’ defensive coordinator, played a major role in the Rams’ 23-20 victory over the Cincinnati Bengals at SoFi Stadium. Morris’ game plan helped Los Angeles sack Bengals quarterback Joe Burrow seven times. The defense also made two critical fourth-down stands near midfield, one early in the game that led to the Rams’ first touchdown and one late in the fourth quarter that sealed the franchise’s first championship since the 1999 season.

The elder Shanahan isn’t surprised by anything Morris accomplishes. During his time in Washington, Morris got off the mat and rebuilt his career.

“Anytime you’re a head coach and you get fired … it’s a tough experience,” Shanahan said Saturday in a phone interview. “You say to yourself, ‘Am I ever going to get the opportunity to be a head coach again?’ He had an opportunity, and it doesn’t matter what happened, it didn’t work out. We had that conversation.

“All that matters is what direction are you going to go. What are you going to do to make yourself the best coach possible, so that the next time you get an opportunity you’re in the best position to succeed? Are you going to put in all [of] the work it takes to do those things for yourself? And you know what? He took that and really ran with it.”

At one time, Morris, who’s Black, wasn’t just one of the league’s fastest-rising minority assistant coaches – he was a rock star regardless of race. He had been an assistant on Tampa Bay’s first Super Bowl championship team in 2002 four years after graduating from Hofstra. And in 2009, when the Buccaneers tapped him to lead them, he was the NFL’s youngest head coach at only 32.

After going 21-38 in three seasons, however, Morris was out in Tampa Bay and seeking to reclimb the coaching ladder.

Early in their careers, Morris and Kyle Shanahan worked together as low-level Buccaneers assistants. To this day, they remain close. Always impressed by Morris, Mike Shanahan was eager to add him to his Washington staff. 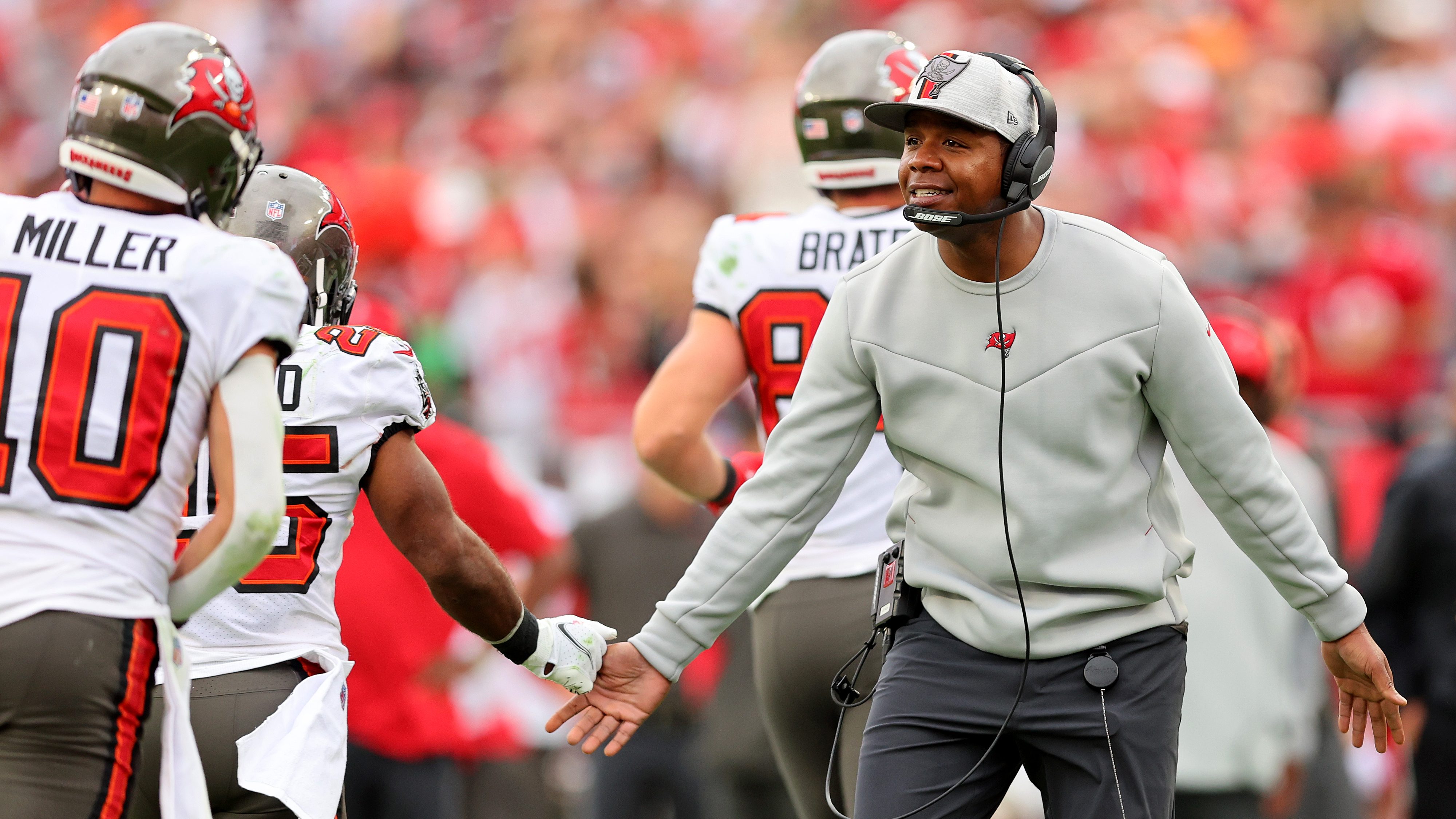 Part of Shanahan’s desire to help Morris stemmed from the fact that he had already traveled the path Morris was then just beginning. In 1988, the then-Los Angeles Raiders hired Shanahan, who was only 35, to be their on-field leader.

To say the least, things didn’t go well for Shanahan in that job: The Raiders fired him four games into his second season. Shanahan left the franchise with a record of 8-12.

“After that, I knew I needed to be prepared for anything,” Shanahan said. “I tried to learn every position as good as I possibly could learn it to where I could coach offense, defense or special teams.

“When I talked to Raheem, I told him he was in a great position, which coaches normally don’t have working on the defensive side, to really spend a lot of time working with Kyle on offense … and learning what all [of] those offensive coaches do. I encouraged him to do it. And he jumped into it.”

Before the 2012 season, Kyle Shanahan, Washington’s offensive coordinator, was busy devising a system to maximize the skills of rookie quarterback Robert Griffin III.

Morris participated in many late-night brainstorming sessions at the team’s headquarters in Ashburn, Virginia, during which Kyle Shanahan challenged his top lieutenants to think outside of the box. Very far outside.

Besides Kyle Shanahan, the San Francisco 49ers’ head coach since 2017, the group also included Sean McVay, who became the Rams’ head coach in 2017; Matt LaFleur, hired in 2019 to lead the Green Bay Packers; and Mike McDaniel, who last week became the Miami Dolphins’ head coach. During those meetings back in the spring and summer of 2012, Morris provided a defensive perspective that proved to be invaluable in the offense Kyle Shanahan ultimately designed. Griffin was selected the Associated Press Offensive Rookie of the Year and Washington won its first NFC East title since the 1999 season.

Morris was even better at his day job. Following his lead, Washington’s cornerbacks and safeties were at their best.

DeAngelo Hall can attest to that.

Hall, formerly an NFL defensive back for 14 seasons, said Morris is second to none at inspiring players to reach higher.

“Just being around Rah, especially having the coaches I’ve had in my career, he’s a dude who knows how to communicate. … And the thing is, a lot of people think he takes it easy on his players, but that’s not it. He was one of the toughest coaches I’ve ever had. But I respected the advice and the constructive criticism from him because I knew he cared about me and wanted me to be the best player I possibly could [be].”

Among Washington’s 2012 defensive backs, Hall wasn’t alone in sharing a strong bond with Morris. Many of Morris’ pupils from that team, including Hall, are still united with their former coach on a group text-message thread.

“We consider ourselves family,” Hall said. “Raheem’s in the group chat … and we still communicate. That’s just how it is.”

With their success during the 2012 season, Shanahan and his assistants appeared to be well positioned for some good years ahead in the nation’s capital. However, Griffin suffered a serious knee injury, owner Daniel M. Snyder fueled a rift between Griffin and the Shanahans and Snyder fired Shanahan at the end of a disastrous 3-13 season in 2013.

Morris remained on the staff for the 2014 season under new head coach Jay Gruden. Safety Ryan Clark, who played for Washington early in his career, returned to the team that year for his final NFL season.

After 10 seasons in the league, Clark thought he had seen it all, but he had a new experience working with Morris.

“Raheem’s ability to simplify things through communication is really second to none,” said Clark, now an ESPN analyst. “By the time I got to him, I was older. I’m in that last year, and I’m still learning things in new ways from Raheem.”

Morris left Washington and was reunited with Kyle Shanahan, then the Atlanta Falcons offensive playcaller, in 2015. After Morris served as Atlanta’s assistant head coach and defensive passing game coordinator for one season, he moved him to coach wide receivers. In 2016, the Falcons led the league in scoring with an average of 33.8 points and won the NFC Championship (Atlanta suffered a historic collapse in losing Super Bowl LI to the New England Patriots 34-28 after leading 28-3).

Atlanta’s offense thrived that season largely because of Morris’ work with the team’s wideouts.

Morris took a different approach than most who coach the position. He pulled from what he knew best – defense – but also blended much of what he learned during those long days in Ashburn working with Kyle Shanahan, McVay, LaFleur and McDaniel to help Griffin succeed as a rookie.

Just as Mike Shanahan envisioned, Morris became an even better coach from his experience on offense with Washington.

“He did an awesome job,” said Nick Williams, a wideout on the 2016 Falcons. “He really broke down what the defense is trying to do to you. He wanted us to be open to rethinking some things, and everyone trusted him.”

McVay hired Morris to replace Brandon Staley, who became the Los Angeles Chargers’ head coach. In Morris’ first season guiding the team’s defense, the Rams gave up an average of 103.2 rushing yards to rank sixth in the NFL.

The Rams also won the Super Bowl, so there’s that.

Despite his post-Buccaneers success, Morris still is awaiting his next opportunity to prove he can be a winning NFL head coach. After recently interviewing Morris for their opening, the Minnesota Vikings chose his Rams colleague, offensive coordinator Kevin O’Connell instead. With that, this coaching hiring cycle is finished.

Of the nine openings for head coaches at the beginning of the cycle, seven, including the first six, were filled by white coaches. Former Miami Dolphins head coach Brian Flores has filed a lawsuit against the NFL – seeking class-action status – alleging widespread racial discrimination in the NFL’s hiring practices. 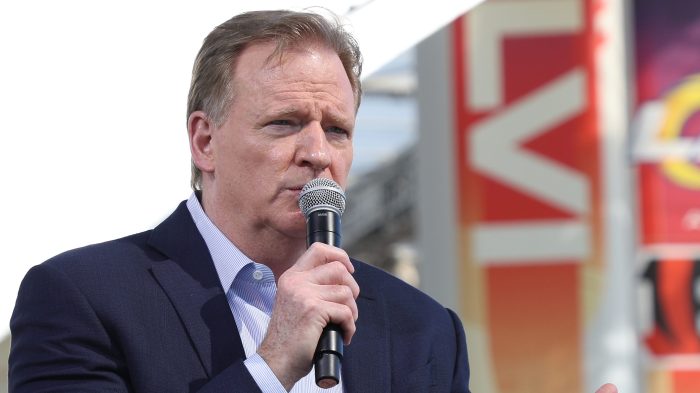 Roger Goodell knows NFL is failing at hiring Black coaches, but what will he do about it?Read now

Last week, commissioner Roger Goodell acknowledged yet again that the NFL has a hiring problem. For Black employees in the NFL, that has been painfully obvious for a long, long time, Hall said.

“You’re talking about a guy who has shown he has the knowledge, is a great teacher and a great communicator,” Hall said. “No disrespect to anyone, but it’s just difficult to understand how another guy and Rah could both go into a room in front of the same people to present their case, and Rah isn’t the one picked. To me, it’s just mind-blowing. But that’s the thing – the system is broken.”

Now 45, Morris is no longer a rising fresh face. He’s an established coach who has nearly completed the long climb back up the ladder, but remains blocked from reaching the top rung.

Mike Shanahan, for one, believes Morris’ time will come again. And the team owner who partners with Morris will be pleased he did.

“The sky’s the limit for him,” Shanahan said. “That next opportunity is going to come. I know it will.”

After bouncing back while with Washington, Morris is ready. He just needs an NFL team owner to believe likewise.