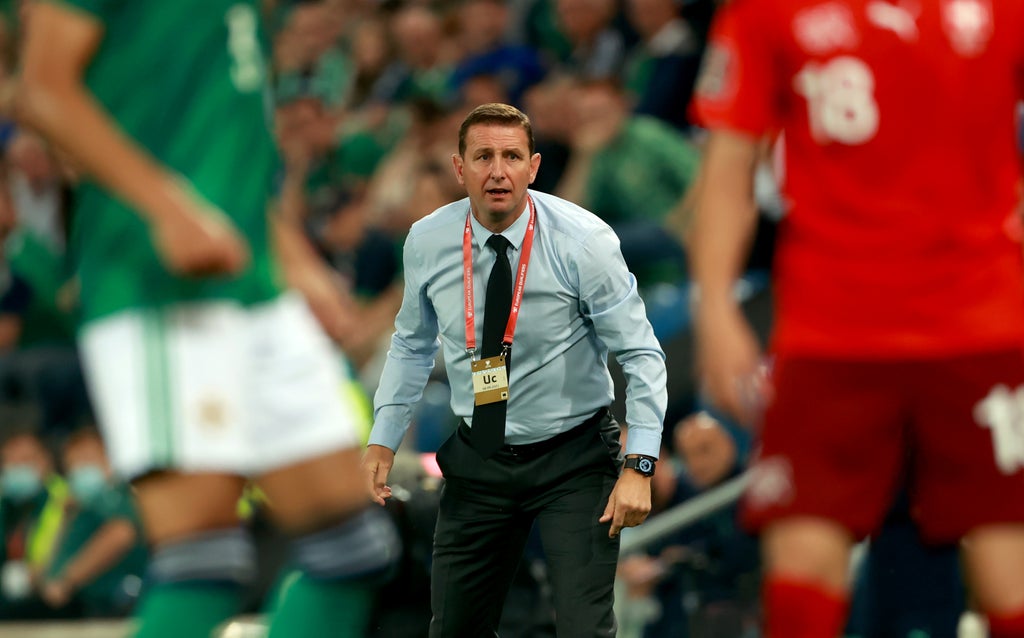 Northern Ireland already effectively had one arm tied behind their backs at the Stade de Geneve, having seen seven players – including Jonny Evans, Corry Evans Ali McCann and Shayne Lavery – ruled out of a defeat which all but ends their hopes of reaching Qatar next year.

And there was hard luck in how they conceded the first goal – with more than one fortunate bounce in the build up to Steven Zuber’s opener in first-half stoppage time before Christian Fassnacht added a second in stoppage time.

In between times, Northern Ireland had defended stoically – Bailey Peacock-Farrell made a string of impressive saves while those in front of him threw themselves in front of pretty much everything Switzerland had.

“You can’t knock the spirit or the camaraderie, the togetherness of the team,” Baraclough said. “We knew we had to dig in for long periods, maybe nick something on the counter or from a set-piece, to stay in the game until 70 or 75 minutes.

“Then we talked about going two up top and trying to be some sort of force, to send in Josh Magennis and get in and around them.

“We knew we would leave gaps the longer the game went on but they’ve given absolutely everything, they’ve put bodies on the line and put us in a position going into the last few minutes.”

Baraclough’s men were so close to reaching half-time without conceding, potentially giving the manager time to regroup, but a deflection and a lucky bounce allowed Breel Embolo to play in Zuber to score the opener with what proved the last kick of the first half.

“We’d tried to get information on to get to five at the back and get us to half-time,” Baraclough added. “Again, I thought we did so well. We’ve got leaders, organisers on the pitch who at times had to make those decisions and did exactly what we’ve spoken about.

“You need those leaders. It was a bitter blow to concede right on the stroke of half-time. In the second half we knew we were going to leave gaps the more we tried to push on to get some kind of result out of it.

“But I’d much rather lose by two or three than to not have a go and try and do something about the one goal.”

“We’ve got to try and lick our wounds now and get ready for Tuesday,” Baraclough said.