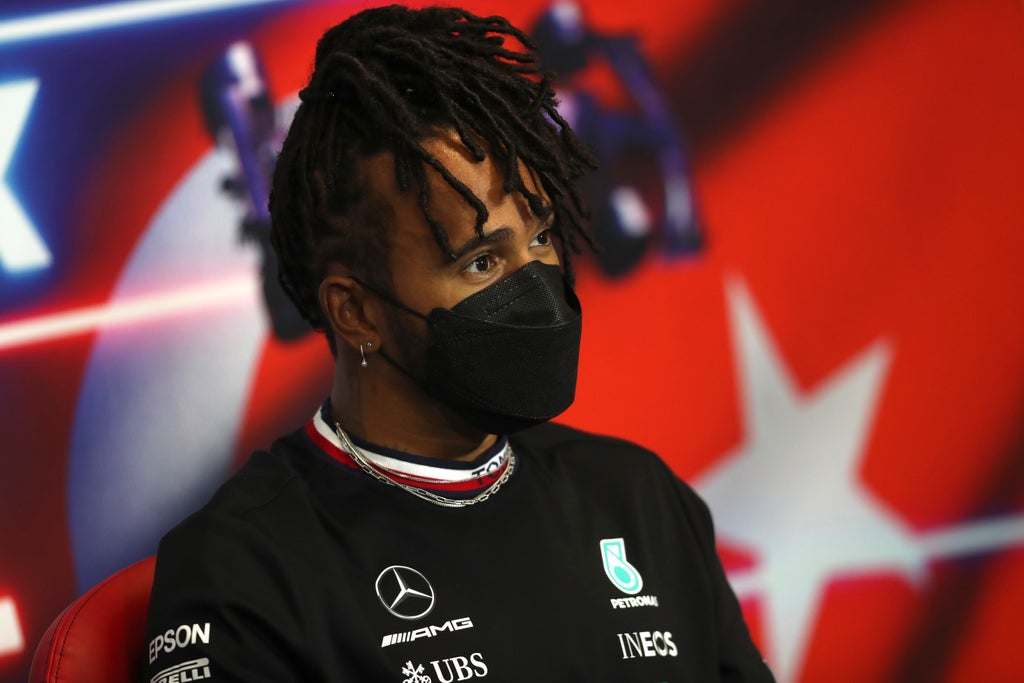 Lewis Hamilton said he must secure pole position after he was hit with a grid penalty for Sunday’s Turkish Grand Prix.

Hamilton will be demoted 10 places for taking on his fourth engine – a punishment which could prove pivotal in determining the outcome of the Briton’s fascinating see-saw title fight with Max Verstappen.

On Thursday, Hamilton did not envisage taking a penalty at the 16th round of 22. But less than 24 hours later, his team Mercedes – concerned about the reliability of their driver’s engine – confirmed the switch.

Some consolation for Hamilton is that he will avoid starting plum last after only the ICE (Internal Combustion Engine) was changed, and not a full power unit.

Should Hamilton, quickest in both practice sessions on Friday, qualify fastest here on Saturday, he will be relegated to 11th.

“I need to be on pole to limit the loss,” said Hamilton, who sits two points ahead of Verstappen. “The Ferrari cars are going to be hard to pass and the Alpines and the McLarens, too.

“I have a lot of work to do on Sunday, so I am just going to focus on doing the best job I can.”

Mercedes rate the circuit here, 30 miles outside of Istanbul among the easier tracks on the calendar to overtake – and Hamilton will hope to come through the field like Verstappen did at the last race in Russia

The Dutchman was thrown to the back for using his fourth engine of the campaign, but finished second to limit the championship damage.

The early signs were certainly encouraging for Hamilton at the venue where he secured his record-equalling seventh world crown 11 months ago.

He ended the opening session on top – four tenths faster than Verstappen – before also setting the quickest time in the afternoon running, 0.166 seconds clear of Ferrari’s Charles Leclerc, with Valtteri Bottas third in the other Mercedes.

Verstappen was only fifth in the day’s concluding session, 0.635sec adrift of his championship rival.

“We’ve got a little bit of a balance mishmash at the moment,” said Red Bull team principal Christian Horner.

“It’s going to be a busy night, burning the midnight oil with the mechanics and no doubt back at the factory in Milton Keynes as well.”

Hamilton has claimed two victories on Turkish soil, in 2010, and again last year – delivering a supreme performance in the wet conditions to match Michael Schumacher’s record haul of titles.

While practice was played out under clear skies on Friday, rain is forecast for the remainder of the weekend.

Reflecting on his achievement last year, Hamilton added: “I felt like we were just here. It is crazy how time flies.

“It was an incredible moment, a difficult race, so to come out on top, with no real mistakes in the race, left me emotional.”

Hamilton sobbed in his crash helmet following his historic achievement. Last time out in Russia, Lando Norris was reduced to tears after coming within two laps of toppling Hamilton as Britain’s youngest F1 winner.

The McLaren driver, 21, stayed out on slicks as those around him switched to wet rubber as the rain intensified in the closing stages of the dramatic Sochi race. Norris fell off the road and crossed the line seventh as Hamilton claimed his 100th triumph.

“I have worked towards winning an F1 race my whole career, so it was definitely one of the toughest moments when it felt so close and then so quickly fell away,” said Norris, sixth in practice on Friday.

“It is tough because no matter what anybody says to you, you just ignore it.

“It didn’t matter how many times people would say ‘it is OK, you will do it one time’, or ‘you will get another chance’, it made it worse.

“You then dwell on it so much. Was it my fault? Did I do all of this? Why didn’t I just stop for the intermediate tyres?

“But when we reviewed it, I realised I made some good decisions. Unfortunately, we got one decision wrong.”