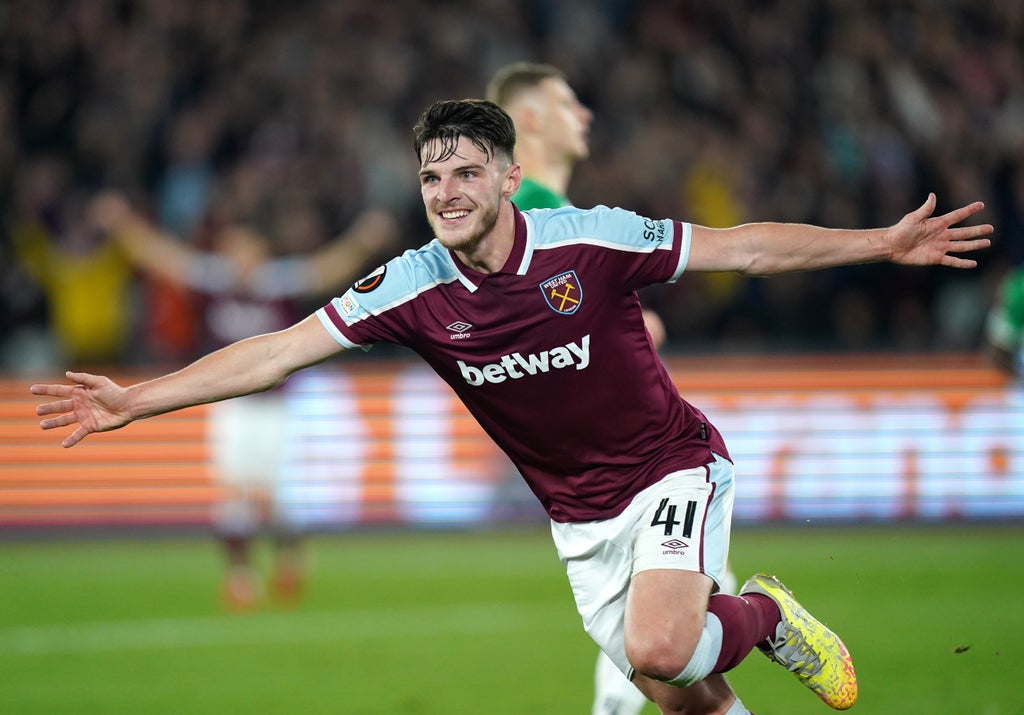 Rice grabbed his second European goal in as many matches as West Ham won their first ever home group-stage match and made it two wins from two.

Said Benrahma grabbed a second in stoppage time to wrap up another victory.

It was a fitting result the day after West Ham unveiled a statue of Geoff Hurst Bobby Moore and Martin Peters – three of their 1965 European Cup Winners’ Cup-winning side who went on to lift the World Cup for England a year later – outside London Stadium.

Having defeated Dinamo Zagreb 2-0 in their Group H opener in Croatia two weeks ago, Moyes’ side are already in a strong position a third of the way through the stage.

The Hammers boss said: “The performance I wouldn’t put as high as some we’ve had this season, but we are still learning at this level. We did the job and we were worthy winners.

“It took a really well-worked goal and a good goal by Declan. He has stepped up, he has the ability to get forward and score goals and we are encouraging him to do that. It’s good that he’s got two in this competition already.

“He’s beginning to show a little bit more, I think he’s more than capable, and he’s got a great shot in him too. But overall he’s a really good, developing midfield player.”

It was a match West Ham were expected to win comfortably with their opponents struggling badly in the Austrian league this season, and both Rice and Craig Dawson hit the frame of the goal before they went ahead after half an hour.

Michail Antonio chested the ball down from Andriy Yarmolenko’s pass and raided down the left before crossing low for Rice, who had started the move on the halfway line before racing forward to tap into an empty net.

It was the first home goal for a West Ham player in Europe, qualifiers aside, since Frank Lampard wrapped up a 3-0 UEFA Cup win over Croatian side Osijek in 1999.

Sadly the goal prompted some rival fans, who had been throwing plastic bottles and winding each other up non-stop, to try to get to each other with police and stewards having to intervene.

That flare-up was quickly dealt with, although there was further trouble at the end, and even an altercation between supporter liaison staff from both clubs in the bowels of the stadium, with Rapid’s eventually being led off the premises.

“I don’t know who started it but we don’t want that reputation, we want to be seen as a club who can travel to Europe and everybody welcomes us. I was aware of some things being thrown.”

West Ham had a let-off in the second half when German referee Tobias Stieler gave a penalty after Rapid sub Marco Grull went down under a non-challenge from Ben Johnson, with VAR correctly overturning the decision.

And Benrahma made sure it was goodnight Vienna when he cut inside and curled in the second in stoppage time.

Rapid coach Dietmar Kuhbauer said: “You can never be happy after a loss but we played a good game, especially in the second half. Overall a decent performance.”