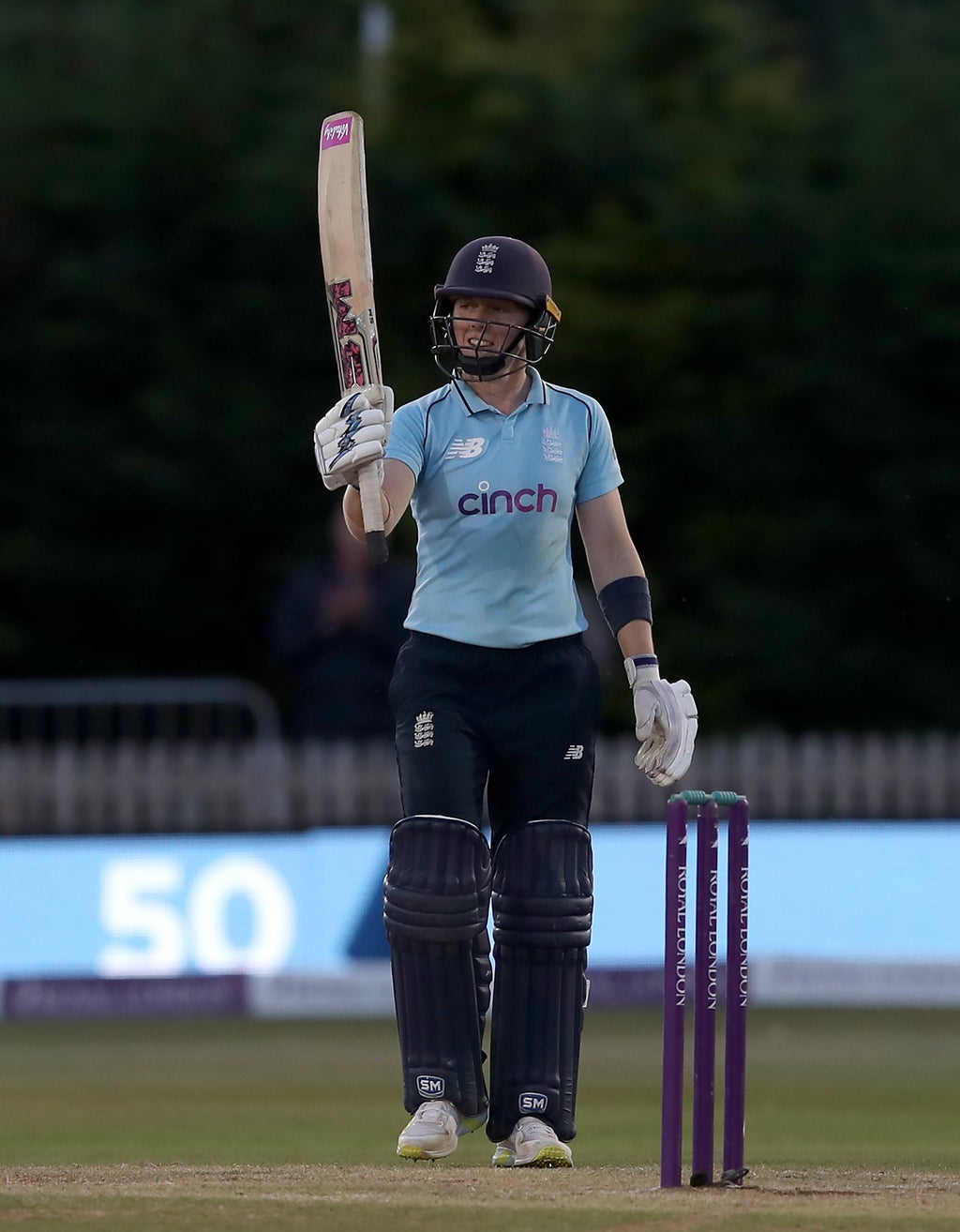 Heather Knight hit an inspired captain’s century as England Women sealed their one-day series against New Zealand with a record chase at Derby but only after riding out some late drama.

Set a steep 245 to win – two more than their previous best – Knight struck a classy 101 from 106 deliveries to take her team to the cusp of victory.

But she fell just short the line, setting up a final equation of six needed from the final over. The scorebook ultimately recorded a three-wicket home win with three balls remaining, but it was a nerve-shredding conclusion as Sophie Ecclestone was stumped off a wide with the scores tied.

Leigh Kasperek lost the wicket along with the match, in a cruel moment. The rollercoaster finish should not detract from Knight’s efforts, though, with her fourth international hundred and second in the 50-over format a match-winning knock that reasserted her influence.

England had given a fresh lick of paint to their seam attack, replacing Katherine Brunt, Tash Farrant and Kate Cross with Anya Shrubsole Freya Davies and Nat Sciver, and put them straight to work after winning the toss.

After 10 overs, and with New Zealand creaking at 35 for three, it looked a perfect ploy. Suzie Bates ran herself out tamely but Shrubsole accounted for the other two, conjuring just enough swing to see off Maddy Green and Lauren Down.

New Zealand’s middle-order was about to assert itself, though, with Katey Martin’s unbeaten 65 the common denominator in stands of 56 and 84 alongside Sophie Devine and Amy Satterthwaite.

England shot themselves in the foot a few times along the way, failing to challenge a legitimate lbw shout at the very start of Martin’s innings and putting down three catches off Ecclestone.

Charlie Dean palmed Devine over the ropes early in her stay, turning a wicket chance into a six, while a failed caught-and-bowled attempt and a miss at slip reprieved Satterthwaite on 13 and 14. Ecclestone, for just the fourth time in her ODI career, ended wicketless from her full allocation.

Instead, it fell to her new spin-bowling partner Dean to pick up the rewards. She had Devine lbw for 41, foxed Satterthwaite round her legs for 54 and cut Brooke Halliday down in full flight. The 20-year-old newcomer even came close to cutting Martin short on 42, but Knight could not hang on to a tough chance at short cover.

England’s pursuit of the White Ferns’ 244 for eight began at a lively pace, racking up 52 in the first 11 overs as Lauren Winfield-Hill set the tone with a flurry of boundaries.

But Hannah Rowe’s introduction changed things dramatically as she clean bowled Winfield-Hill for 33, had Tammy Beaumont caught down leg and pinned Sciver in front of leg stump.

At 71 for three, the momentum had abandoned England but Knight and Amy Jones (40) wrestled it back with a cool-headed stand of exactly 100. Patience has been in short supply for Lisa Keightley’s side in the series but the pair played with thoroughness, working the gaps as the ball softened and the pitch played dead.

The run-rate was kept carefully below a run-a-ball and when Knight passed 50 with consecutive boundaries off her fellow skipper, Devine, things looked serene.

Jones shattered the calm when she hacked Rowe to mid-off, her first real misjudgement, and tension peaked as Sophia Dunkley followed for a duck leaving 60 to get off as many balls. A 13-run over off Rowe – including a monstrous six by Danni Wyatt – seemed to settle it but the twists were not over yet.

Shortly after reaching her hundred Knight gave it away with eight still needed, heaving Devine into the deep but not getting enough on it. Wyatt then got her footwork all wrong as she was lbw off the final ball of the penultimate over.

Shrubsole swatted away the mounting nerves by lifting the next delivery for four but Kasperek’s wide, and Ecclestone’s near-miss, brought things to a head and secured the silverware for England.