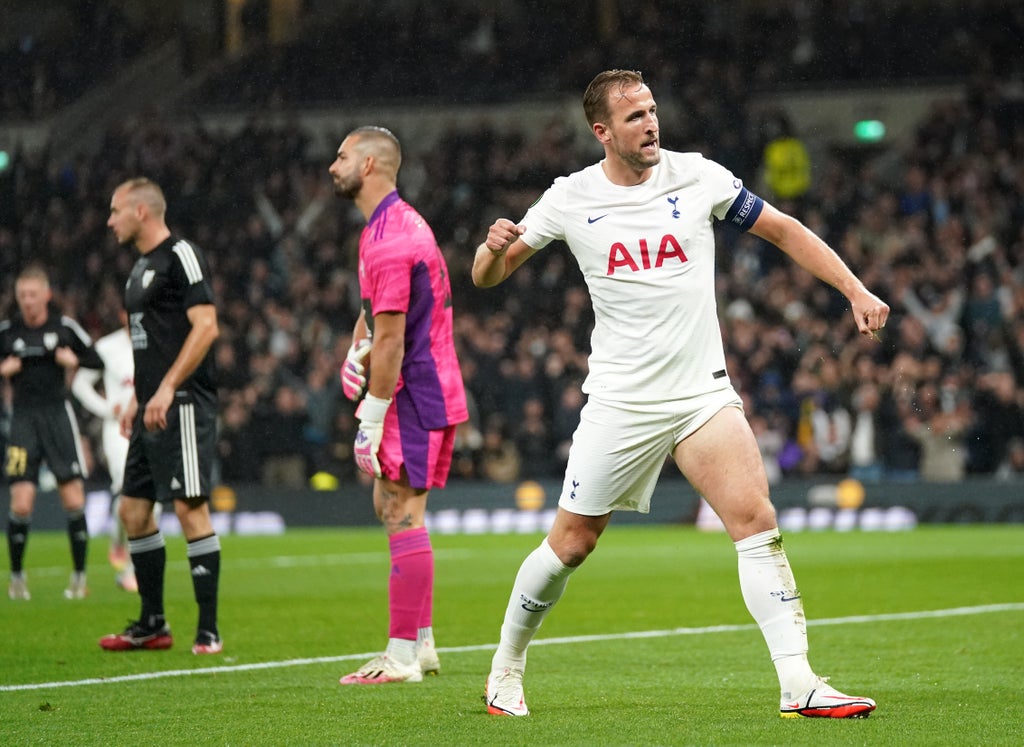 Harry Kane climbed off the bench to bag a hat-trick as Tottenham produced a confidence-restoring 5-1 win over Mura in the Europa Conference League.

Spurs came into the game on the back of Sunday’s harrowing north London derby defeat to Arsenal needing to regain their strut and find goals and the Slovenian outfit were the perfect opposition.

Goals from Dele Alli and Giovani Lo Celso in the opening eight minutes put Spurs in charge and, after Ziga Kous scored the goal of his life for the minnows after half-time, the England captain came on to finish the job in the final 30 minutes.

The fact Kane was needed against the lowest ranked team in the competition, with a UEFA coefficient rating of 337, could be seen as a measure of Tottenham’s plight this season, but the striker, yet to find the back of the net in the Premier League, will surely benefit from this goal-laden cameo.

It was his 13th career treble for Spurs as he edges closer to the late Jimmy Greaves’ record of 266 goals.

Nuno made nine changes from the side who were embarrassingly beaten in Sunday’s north London derby, but even with a second-string side out this was still a mismatch against a team formed just 12 years ago.

They took the lead after just four minutes as Alli, captain for the evening and playing in a more advanced position, surged into the box and was brought down by goalkeeper Matko Obradovic before stepping up and coolly slotting home from 12 yards.

The second goal came just four minutes later after Lo Celso glided past his marker and into the area, unleashing a curling effort into the roof of the net.

There would have been hopes of a goal glut after such a quick start, but it did not materialise as Spurs – so blunt in attack this season – laboured in the search of a third goal.

Spurs had a shock early in the second half as Mura silenced the home crowd with a fine goal.

After Spurs failed to clear a corner, the ball fell to Kous 25 yards out and he sent a first-time volley into the bottom corner for a picture-book goal he will always be able to remember.

Nuno was not impressed and called for the cavalry, sending on Kane, Son Heung-min and Lucas Moura – and it did the trick 10 minutes later.

Moura picked out the England captain, whose fine movement created space and he fired home in the clinical fashion that has so far been missing in the Premier League.

The second came 14 minutes from time after a lightning quick counter-attack that saw Lo Celso set Son free and the South Korean squared for his great mate to fire home from close range.

Kane ensured he would take the matchball home in the 88th minute as Lo Celso’s incisive pass picked him out and he made no mistake from eight yards.