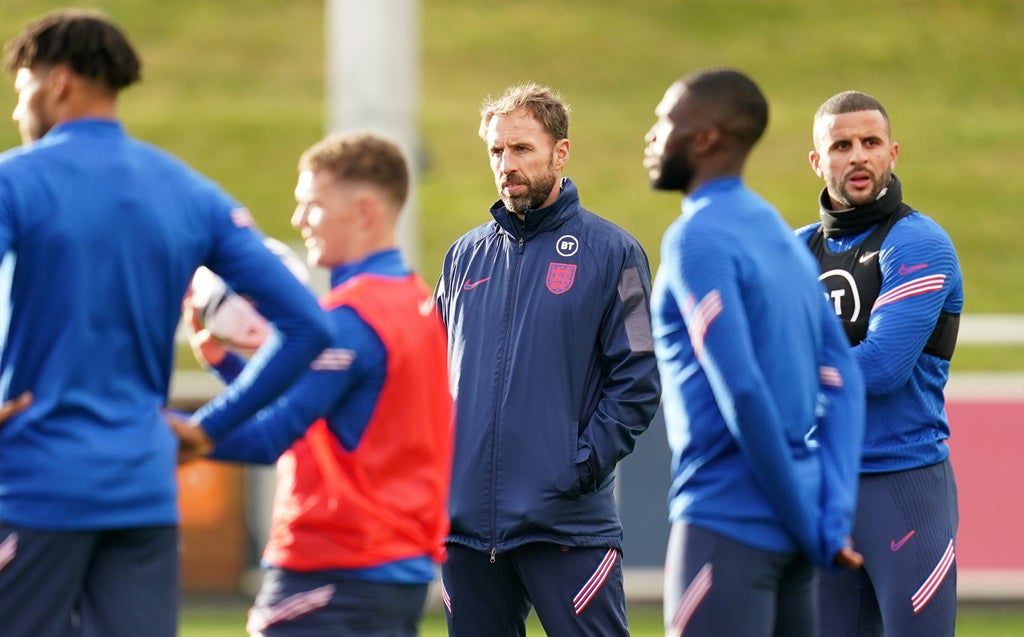 Gareth Southgate admits criticism of his public support for the Covid vaccination programme could make others think twice about discussing the issue – suggesting “conspiracy theories” could be preventing players from getting jabbed.

The England manager presented a video after Euro 2020 urging people to get vaccinated and was abused online as a result.

The uptake of the vaccine among professional footballers has been sporadic, with Southgate admitting he is unsure how many of his current England squad have received both doses.

“I think within the age group and age range (of his players) – I don’t have all the data and statistics – I would sense that younger people are at a different scale in terms of uptake to older people,” he said.

“They seem to be more susceptible to social media posts or living their lives on social media, where a lot of those theories maybe abound. We might just talk to our GP and do things that way.

“But look, who knows, I could be sitting here in five years’ time and have been wrong. With some of the other issues it’s been very clear what’s right and what’s wrong.

“I’ve been willing to speak about that, but could I 100 per-cent say that the vaccination programme is safe? Well, I couldn’t because I’m not a chemist and I’m not a doctor and I’m not a scientist.

“I would imagine we wouldn’t be in the position we are on the mass vaccination programme without research having happened and without governments and medical people being totally sure, so I am comfortable in taking that risk.”

While footballers – particularly those in and around the England squad of late – have raised awareness and fought against racism, anti-discrimination and other topics, most remain private when it comes to the vaccination programme.

Southgate does not blame them and pointed to an example of the abuse he received for supporting the NHS vaccination drive as a reason why some may be put off.

“I recognise that others might feel less comfortable and have some anxiety,” he added.

“That’s why it’s a bit more complicated and I guess that would be why perhaps they might feel less confident about speaking up.

“If you’re receiving messages when you support the programme that say ‘You could be up in front of a Nuremberg type trial in 10 years’ and people are quite vicious with comments, it does make you think twice about speaking out.

“Because what if you are on the wrong side? At the moment I couldn’t be sure I am on the right side. I am comfortable that I’ve had the vaccine.

“I’m comfortable that I think it was the right thing to do a video for the NHS. But I also recognise that others might not be so keen to put themselves in that situation.

“With racism they are absolutely clear. They know what they have lived through and experienced as a team.

“At their age they are more open to some of these conspiracy theories because they are reading social media more, they are perhaps more vulnerable to those sort of views. From what I can see there is a bit of confusion around.”

Southgate also suggested medical confidentiality is the basis for his players not publicly sharing their Covid vaccination status.

The Three Lions are preparing for World Cup qualifiers against Andorra and Hungary during the seventh international get-together since coronavirus changed the landscape.

This camp comes amid fresh scrutiny about vaccination rates within football and as organisers of the Qatar World Cup are reportedly planning to ban unvaccinated players.

The players have given little indication of their vaccination status in media activity since joining up with the squad at St George’s Park and Southgate insists it is not up to him or the Football Association to instruct the squad on whether they should reveal their stance on vaccines.

“There’s a thing called medical confidentiality which seems to be being totally overlooked in a lot of areas at the moment,” he said on the eve of the Andorra fixture.

“These aren’t our players. I don’t think the clubs would thank us for sharing that sort of information and frankly, it is personal to the players. I’m sure you have GDPR at your workplace, you’ll be conscious of all of that.

“Our doctor over the last year and a half has always spoken to the players about the current situation in terms of infection in the country.

“He’s always explaining the benefits of vaccination in that context. But no, we of course have had to deal with many different topics, but also we have to prepare a team to play football.

“I’ll always speak to the players about anything in their lives. But we are here to win football matches first and foremost.

“Look, everybody knows where I stand on the subject. To move out of a pandemic, the only way was a vaccination programme and I think that was essential.

“There is then the complication that there are lots of individual circumstances around that and I understand that some people would be anxious, perhaps.”