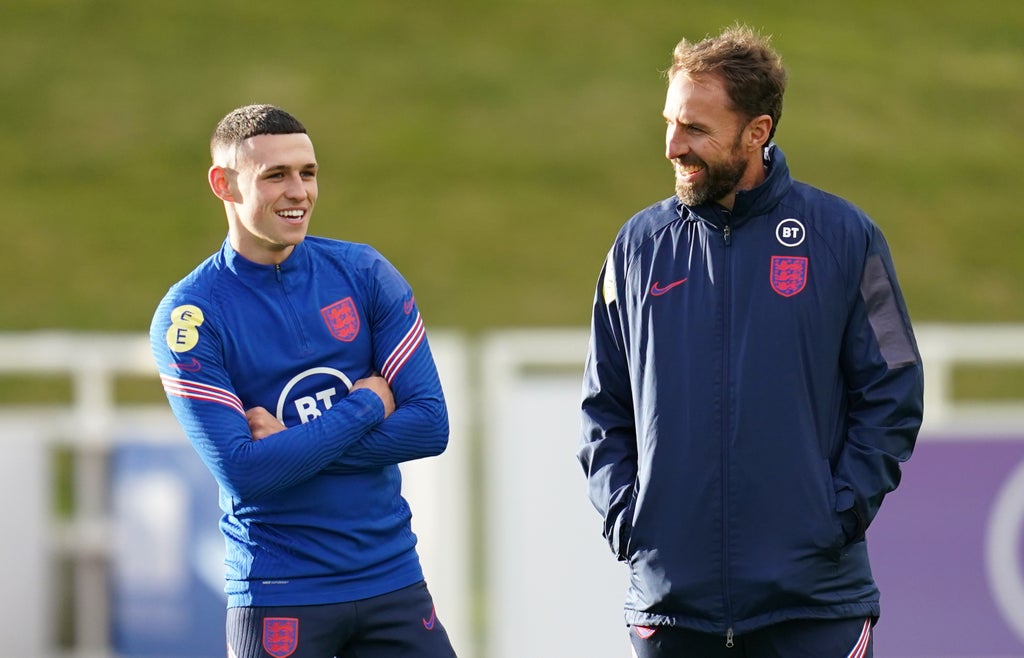 Gareth Southgate is excited to see what “special player” Phil Foden can achieve at next year’s World Cup – but the England manager is wary of piling too much pressure on the ever-improving playmaker.

Long touted as a future star, the 21-year-old continues to make strides at Manchester City and put in an outstanding display in the 2-2 draw with Liverpool before the international break.

Foden took that form on to the international stage on Saturday, running the show from central midfield against minnows Andorra and providing two killer balls to unlock the hosts and kick off a 5-0 England win.

The victory means it surely remains a case of when rather than if Southgate’s undefeated side qualify for Qatar, where Foden looks set to play a key role for the Three Lions.

Asked if Foden has the potential to star at next year’s World Cup, the England boss said: “Yeah, the only thing I am loathed to do is put any pressure on him.

“We’ve known since 15, 16 what might be possible and we are seeing that.

“His evolution at his club has been perfect, really. For lots of us we were probably waiting for him to get established in that City team, you have to say that Pep [Guardiola] has managed that really well. He is flourishing.

“The fascinating part is what that role might be and it could be any one of a number, frankly, because he’s got the ability to play in many different positions.”

Southgate said Foden proved against Andorra that “there’s another level” to come, having shown promising flashes during England’s summer run to the Euro 2020 final.

The 21-year-old missed the loss to Italy with a foot injury that kept him out, according to Southgate, for “far longer than any of us expected”, but he has begun firing again since returning to action in September.

“I am not trying to diminish what he’s shown and what’s possible, but I don’t want to create too much for him,” Southgate said after the match in Andorra.

“I felt there was a lot ahead of us this summer and the danger is we create too much which is too much to live up to.

“Let us just enjoy him, he is a special player without a doubt. Let him grow into the team.

“We have to try and bed him in at the right time and get him positionally right for the right games. But we are delighted to have him.”

Foden has clearly rebuilt trust with Southgate after being sent home from his maiden senior camp with Mason Greenwood for the breaching the bio-secure bubble in Iceland in September 2020.

It was a bump in the road for a player whose resilience has been as clear as his ability during his rise through the ranks, which has seen him build a medal-laden CV at a young age.

Southgate referred to resilience again when asked about his group’s response to the racist abuse they received in Hungary last month as they prepare to host the Eastern European side on Tuesday.

“We talked about Phil’s individual resilience and how resilient the group is and those types of experiences bring you together as a group,” the England boss said ahead of the World Cup qualifier at Wembley.

“They are reference points as much as anything for us as a performance.

“The way we went into an intimidating atmosphere and controlled the game for long periods.