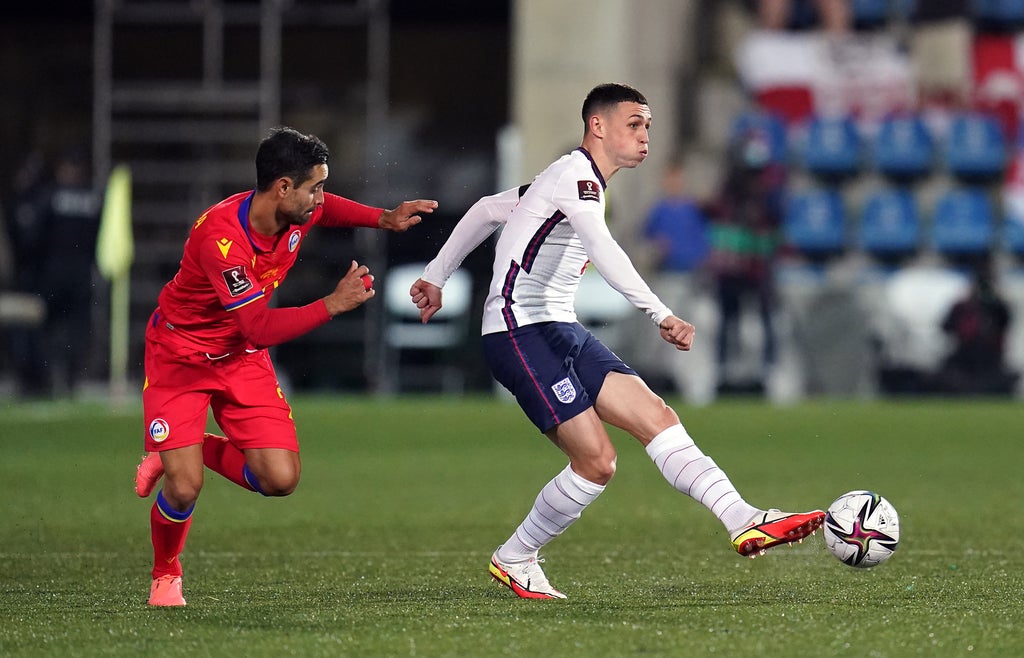 The Manchester City forward may not have got on the scoresheet in the 5-0 victory but put in an eye-catching display at the Estadi Nacional.

Tammy Abraham toasted his first international appearance in almost a year by adding the third, with James Ward-Prowse tapping home the rebound after he saw a penalty saved as Jack Grealish also grabbed his maiden Three Lions goal late on.

Foden was heavily involved in the Chilwell goal before playing a fine pass for Saka to strike, with ITV Sport pundit Roy Keane likening his play to that of fabled NFL quarterback Tom Brady.

Southgate, too, was left purring at the ability of the 21-year-old, and said: “It is difficult (to predict his best position) because frankly he is one of those players who is effective anywhere across that front line.

“If you play him seven, 11, 10, eight. A sort of traditional 4-3-3 midfield with a six, eight, 10, if he was the 10 within that but with the capability to drop lower and build the play at times like he did tonight.

“Part of that is just as he gets stronger as well and part of that will be the balance of the type of player who plays as the other eight and their qualities.

“Look, it’s fabulously exciting isn’t it? When you are trying to break down a defence as we had tonight, and you’ve got a player who can see the passes he sees and can execute them in the way that he did.

“The quality we know. For us it’s really interesting, the possibilities with him in terms of his positioning moving forward.

“Towards the end of the game there were some lovely bits of combination – Foden, (Mason) Mount, Grealish, Saka. The type of play that our players are capable of producing is really exciting.”

The victory keeps England well on course for ensuring qualification to the World Cup in Qatar next winter, with Southgate’s side having now won six of their seven Group I games to date.

While seeing off Andorra would be considered a run-of-the-mill evening for England, there was a landmark reached as they were refereed by a female official for the first time in their history.

On the eve of the game Southgate said it was “very important for gender equality” and, while referee Kateryna Monzul’s evening with the whistle was not without a spot of controversy, he felt it was a tough assignment for the Ukrainian.

“I think this (Andorra) is a very difficult team to referee, because as I said yesterday, 38 minutes the ball was in play at Wembley,” he said. “I don’t know what that was tonight but from the very start the goalkeeper was down, the medics; interesting the way they run on.

“So I think there were lots of challenges and flashpoints where our players had to respond in the right way and in the main they managed to do that and I think that’s always important because we saw even in semi-final the other night, Italy, a red card kills you in the big games and it has done it for us over the years and it did it for us last autumn.

“So, no matter what the level of opponent, if you go down to 10 you give yourselves a big hurdle to cross and it is pointless me talking about what was done to us, what pleases me was that we reacted in the right way.”

Andorra head coach Koldo Alvarez singled out Foden for praise but felt his own side struggled to reach their best levels.

“I think both things have been of influence here, we have been suffering a lot at the back the whole match,” he replied when asked if England shone because of their own performance or the display of the hosts.

“But of course if you have players of the quality of Foden with those kinds of passes, then it is very difficult for us.

“They have had almost no risks (defensively) and after the first goal we have seen that in fact we have been suffering too much.

“I think the second half was a bit better, but we have made more mistakes than during other matches.”