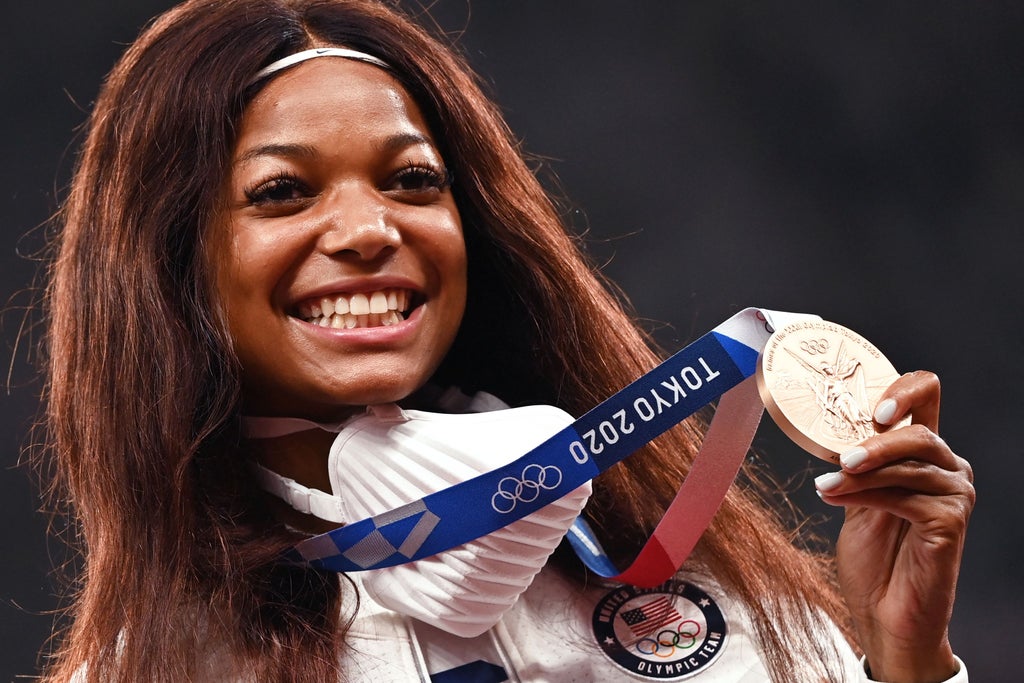 Olympic bronze is just the start for Gabby Thomas and while there is a desire to change the colour of her medal, her legacy will surely stretch far beyond the track.

A Harvard graduate, majoring in neurobiology and global health, Thomas’ goals are constantly evolving and her mental fortitude has enabled her to adapt to her circumstances and thrive despite facing tremendous adversity.

“The bar keeps getting higher and higher,” she concedes with a smile, though this is not confined solely to an explosion of records in athletics in recent months, having run herself the third-fastest women’s 200m ever (21.61) at the US Olympic trials.

Already back on the University of Texas campus to resume her Masters in epidemiology, the New Balance athlete hopes her exploits in Tokyo can provide the same inspiration she felt as an 11-year-old girl.

It was in 2008 when her mother urged her to watch her idol Allyson Felix soar to silver in Beijing, giving birth to a steadfast belief in her potential after discerning a resemblance to the five-time Olympian.

“I hope that it shows Black women that you can really do anything,” Thomas tells The Independent. “It’s a lot of hard work, blood, sweat and tears. But by doing what you care about and just following your passion, you’ll find success.

“When I moved to the group in Austin (Buford Bailey Track Club), I was looking up to the girls, I was inspired by them and wanted to be around them. They were role models to me.

“When you see people like you doing something, you feel inspired to do it. I aspire to be like them, I hope I can do the same thing, and do that same service for young Black girls anywhere, who have multiple passions, multiple dreams and who have all these things they want to do.”

Her major breakthrough, which also included silver in the women’s 4x100m relay, was initially in jeopardy just days out from the trials in Eugene back in June. Anxiety grew after a tumour in her liver was discovered following tests on her hamstring. But after leaning on newfound spirituality, Thomas managed to quell the panic before confirmation, and relief, arrived that the tumour was benign.

“At the time I was very scared finding out about the tumour,” she remembers of the days before she stormed to victory at Hayward Field. “I wasn’t sure how to focus on the trials as I didn’t know what was going on or if I even wanted to know what was going on, if it turned out it was cancer I didn’t know if I could compete at the trials because I’d be too upset and scared.

“I ended up praying so much; honestly, prior to that I wasn’t very religious, but when things like that are happening, it’s very hard not to be.

“Finding out my tumour wasn’t cancerous, so shortly before trials, just a matter of days, it helped motivate me and gave me so much fuel during a competition. I promised myself, I knew how lucky I was to be there and just be healthy, I really wanted to take advantage of that. When I did so well and performed my best, I felt so blessed. I had put in a lot of hard work, I was chosen to perform that well, have the platform and go to represent my country in Tokyo.”

A battle on the track with Jamaican superstar and now double-double Olympic champion Elaine Thompson-Herah will resume towards the end of the year, but her focus has switched seamlessly to the books and utilising her newfound platform.

Thomas admits to feeling anger at the disparity in public health in the United States, with her career entwined throughout the pandemic from the postponed Games and her growing voice within the African American community.

Black Americans have suffered from the highest Covid-19 death rate in the United States, with the Centers for Disease Control and Prevention (CDC) estimating that Native Americans, Latinos and Black people are two times more likely than white people to die of the disease.

“There is some pressure,” Thomas admits when asked about her role to help educate society on public health. “Whenever you have a huge platform, there’s an added pressure, but this is more a gift and an opportunity because I have this elevated platform to speak on it. It’s something I care about, it’s more of a blessing and such a great opportunity.

“We need to provide education and information. The discussion is being had, people are thinking about it, and that’s when change happens.

“Going into the field of public health with my perspective adds to diversity of thought – racially, ethnically, and culturally – which is critical in public health.

“For example, with Covid, we saw how health disparities played out with certain demographics due to factors out of their control such as access to care, education, the ability to work from home or not, etc. So going into epidemiology and administration with this perspective, which is lost a lot of times in those fields, is important to me. Getting the message out is important to me.”

Thomas’ message will only continue to grow louder as part of this sizzling generation of female sprinters, joining Christine Mboma, Shericka Jackson and Dina Asher-Smith in the hunt to topple Thompson-Herah at next year’s World Championships in Oregon.

For now it’s back to academia, but soon enough Thomas will be back on the world stage, aiming to create more history, provoke change and break down barriers.

“I’m an athlete and a student, but really I’m just following my dreams.”