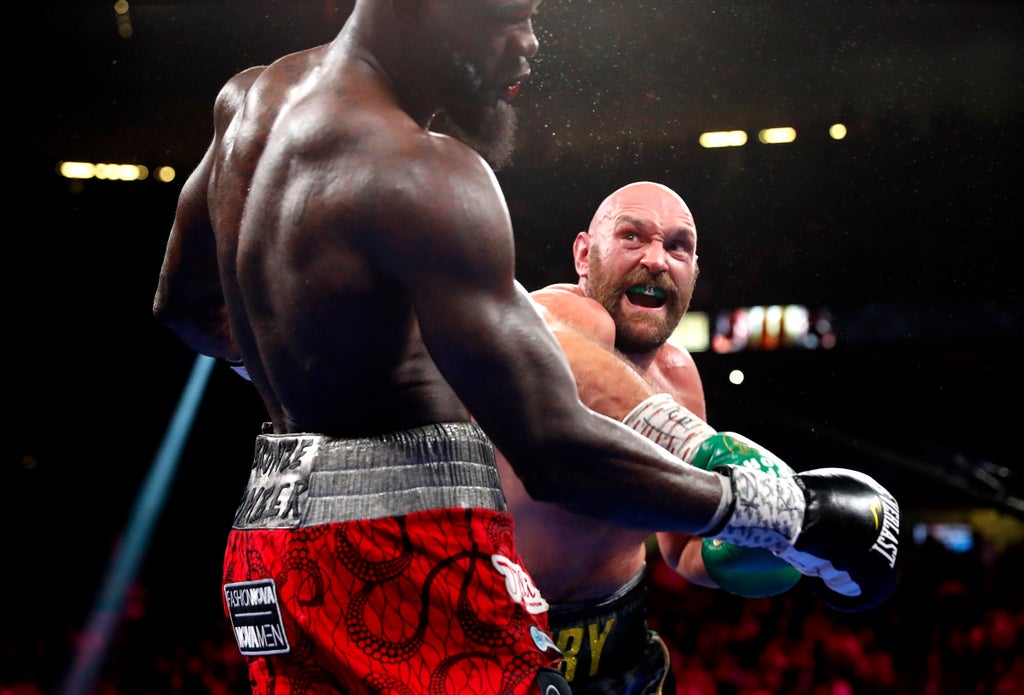 Tyson Fury clambered off the canvas to brutally knock out Deontay Wilder to retain his WBC world heavyweight title in an instant classic.

The gruelling contest that saw Fury dropped twice in the fourth round was finally brought to a conclusion in the 11th to settle this three-year feud.

Almost 20 months since Fury battered the Alabaman in seven rounds, the Briton shone in Las Vegas once more to reassert his dominance at the top of the heavyweight division and complete the trilogy.

After a surprising start from Wilder, who jabbed well to the body, Fury knocked the challenger down in the third with a repeat of the one-sided rematch ominously poised.

But after being saved by the bell, Wilder miraculously rebounded in the fourth, landing a crushing straight right to send Fury sprawling to the canvas.

Fury showed his remarkable ability to recover but was down for a second time before stumbling to his corner as the T-Mobile Arena erupted.

Both men weathered storms with Wilder appearing desperate with his assaults and seemingly drained while carrying the extra weight.

The drama escalated further in the seventh when Fury forced Wilder towards the corner and landed a heavy right to move him to the brink of a stoppage, but to the Bronze Bomber’s credit, he muddled his way through the final 30 seconds.

The messy finish to the round brought the wrath of SugarHill Steward, who demanded more jabs, but Fury’s dominance extended to the eighth, bouncing off the canvas while launching a series of beautiful combinations.

Wilder’s resolve was admirable throughout, but he was evidently exhausted by the eighth with Fury easily swerving his Hail Mary efforts.

The American’s defence had long since disintegrated, which saw him soak up each Fury jab, but his defeated look was deceiving with Fury given a reminder of his prowess with a slick uppercut.

But Fury’s potent combination of technique and power dismantled Wilder once again in the 10th with a crisp right hook sending him to the canvas, hunching over on is knees.

But just as this absorbing contest appeared ready to reach its conclusion, Wilder’s instinct on the inside saw him wobble Fury as the round ended.

A gruesome end awaited Wilder in the 11th as Fury clipped him above his ear with a right. The shot sent him sprawling off the ropes and tumbling towards the canvas, devoid of his senses and finally beaten.

The victory is remarkably Fury’s first successful world title defence of his career, having never defended the title after first becoming world champion with victory over Wladimir Klischko in 2015.

Fury will likely turn attention to a mandatory title defence against Dillian Whyte, should the Briton avoid an upset against Otto Wallin at the end of October.

An undisputed fight with the winner of the rematch between unified champion Oleksandr Usyk and Anthony Joshua would likely be targeted at the end of 2022.