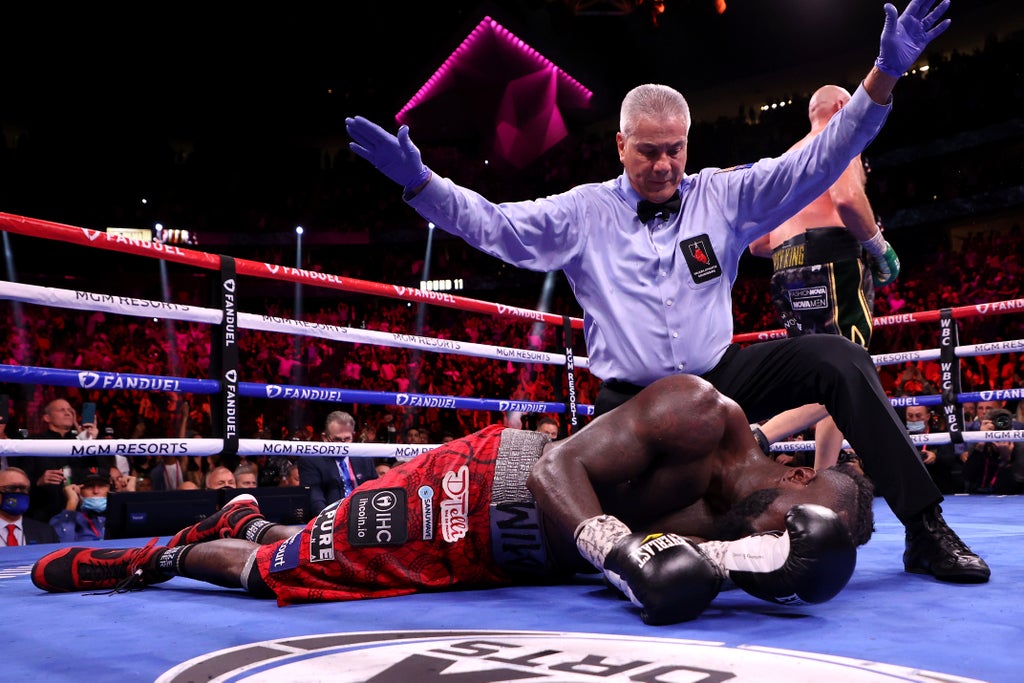 Deontay Wilder has been taken to hospital for tests after Tyson Fury delivered a vicious knockout to retain his world heavyweight title in Las Vegas.

The American swiftly exited the ring and is heading to hospital as a precaution after being stopped in the 11th round of the pair’s third fight.

Fury was sent tumbling to the canvas twice himself in the fourth round, but the Briton responded superbly to dish out a sustained beatdown for the remainder of the fight.

The Alabaman, who was left bloodied by Fury’s repeated heavy shots, has now gone to University Medical Center to be examined.

“I did my best, but it wasn’t good enough tonight,” he said. “I’m not sure what happened.

“I know that in training he did certain things, and I also knew that he didn’t come in at 277 pounds to be a ballet dancer.

“He came to lean on me, try to rough me up and he succeeded.”

Fury was upset at Wilder for failing to accept defeat with grace and labelled his rival “an idiot”.

“He’s an idiot,” Fury said when asked how he felt about Wilder’s reaction to the loss.

“He’s got no love for me Deontay Wilder, because I’ve beat him three times. I’m a sportsman, I went over to him to show some love and respect and he didn’t want to give it back. That’s his problem, I’ll pray for him so God will soften his heart.

“I want to thank everyone in the building tonight who came out to show support for my sport, boxing. Thank you. It was a great fight, October 9th 2021 will go down as a great fight in history. I hope anyway.

“Like the great John Wayne said ‘I’m made of pig iron and steel baby.’ First of all I’d like to say thank you to my Lord and saviour Jesus Christ, in the name of Jesus I won this fight tonight. I give him the glory he gives me the victory.

“I was down a couple of times, I was hurt. Wilder is a strong puncher and he’s a tough man. I was hitting him with some tough shots.

“It was a great fight tonight, worthy of any trilogy in the history of our sport. I’m not going to make any excuses, Wilder is a tough fighter who gave me a real run for my money tonight. I always said ‘I’m the best in the world and he’s the second best.’”