As Fred VanVleet’s star has risen after becoming an NBA champion, he has garnered several endorsement deals that come with video commercials and ads. But before the shoots take place, the Toronto Raptors guard makes it known that there must be people of color on all levels involved for him to take part.

“Any business venture I’m doing, that’s in the contract from the beginning or we’re not doing the deal. If there’s no inclusion or diversity with the shoot and the people recording, the agents and the cast, I’m not doing a deal with them,” VanVleet recently told The Undefeated.

VanVleet is one of the stars, leaders and most popular players for the Raptors. The 6-foot-1 guard is averaging 19.7 points, 6.4 assists and 5.1 rebounds this season. Despite going undrafted in 2016, the former Wichita State star eventually became a starter, won a title in 2019 and was rewarded with a four-year, $85 million contract in 2020. 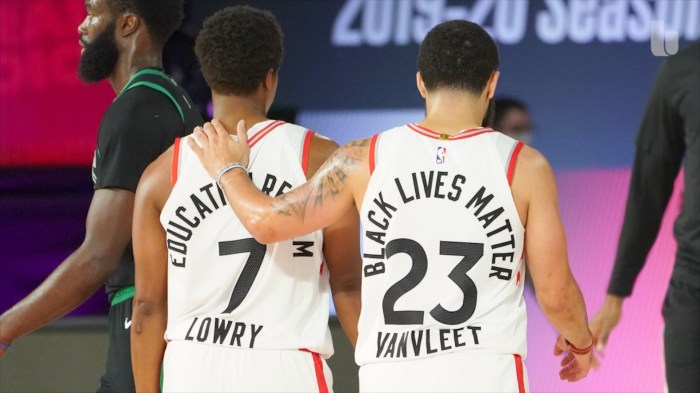 VanVleet is also biracial with an African American father and white mother. As more off-the-court opportunities came his way, he noticed there very few, if any, people of color at the film, photo shoots and speaking opportunities. About two years ago, VanVleet said he was adamant that he wouldn’t endorse a company or a product or take part in a speaking engagement or meeting unless diversity was important to them.

“How can we all relate to each other? And if you can’t relate, then you should probably have somebody here that can relate,” VanVleet said. “And then I’d say it, like I’ll go there, ‘Who’s in charge here? OK. This is the producer of the set. Where are the Black people?’ Now you got them thinking about it.

“Once I kept growing, now I can have the leverage to say, ‘What does it look like before we even get there?’ I’m only doing partnerships with people who are kind of aligned in the same vision.”

VanVleet is also using his platform to motivate and aid Black, Indigenous and people of color (BIPOC) already in or aspire to be in business.

With VanVleet’s rise and strong voice, he has been asked on several occasions if he would like to take part in a basketball podcast. While the answer has been a resounding no from a hoops standpoint, he did wonder if there was a podcast he could take part in that could help people of color in the business world. VanVleet and his financial adviser, Derek Folk, came up with a podcast called Bet on Yourself to help “struggling or up-and-coming BIPOC entrepreneurs shape their business, revamp and sometimes relaunch it altogether.”

VanVleet and Folk took part in what he admitted was a grueling challenge to tape the podcasts at a recording studio in Toronto over the course of three days before the Raptors’ training camp began. They talked to Canadian Football League wide receiver Nate Behar about his influencer marketing app, Firework; vegan cookie chef Shante Bartlett; Veneise George, founder of Yawdi’s; real estate broker Ben Corbier; and Cirque du Soleil choreographer Clarence Ford. All the episodes feature BIPOC business entrepreneurs.

“I loved it. I had a lot of fun,” VanVleet said. “The cool part was when you could break through the show and have a real conversation with the person sitting in front of us. You could tell there was a real human interaction. And it was empowering to be in that position.”

Off the court, VanVleet is trying to strengthen his position in the business world while helping more BIPOC. The Rockford, Illinois, native owns several buildings in his hometown and has a thriving clothing business. VanVleet has donated autograph memorabilia for auction to Rockford Promise, a nonprofit organization that has raised over $1 million for college scholarships for area youth.

On Monday, the Raptors are also announcing the arrival of the Fred VanVleet Scholarship to be awarded to an incoming domestic Black student or Indigenous student at the University of Toronto’s Rotman Commerce program for undergraduate students focusing on business. The scholarship will be based on financial need and academic merit with preference given to a student with an interest in business. VanVleet’s scholarship is renewable based on continued enrollment and maintaining good academic standing.

“I always felt, since I was at a young age, that I’m here to help people and to help make people better,” VanVleet said. “And it gives me purpose. I don’t have to do anything, but it gets boring when you just focus on yourself. I try to make the most out of every day. Maybe from losing my dad earlier growing up, I just felt like I’m living for so many other people than myself.”

In 2019, the Raptors won the franchise’s first NBA championship and celebrated with a mammoth parade in the streets of Toronto. Due to the coronavirus pandemic, the Raptors completed the 2019-20 NBA season in the bubble in Orlando, Florida, and played last season in Tampa. The Raptors are now back in Toronto this season, but former star guard Kyle Lowry is playing for the Miami Heat. 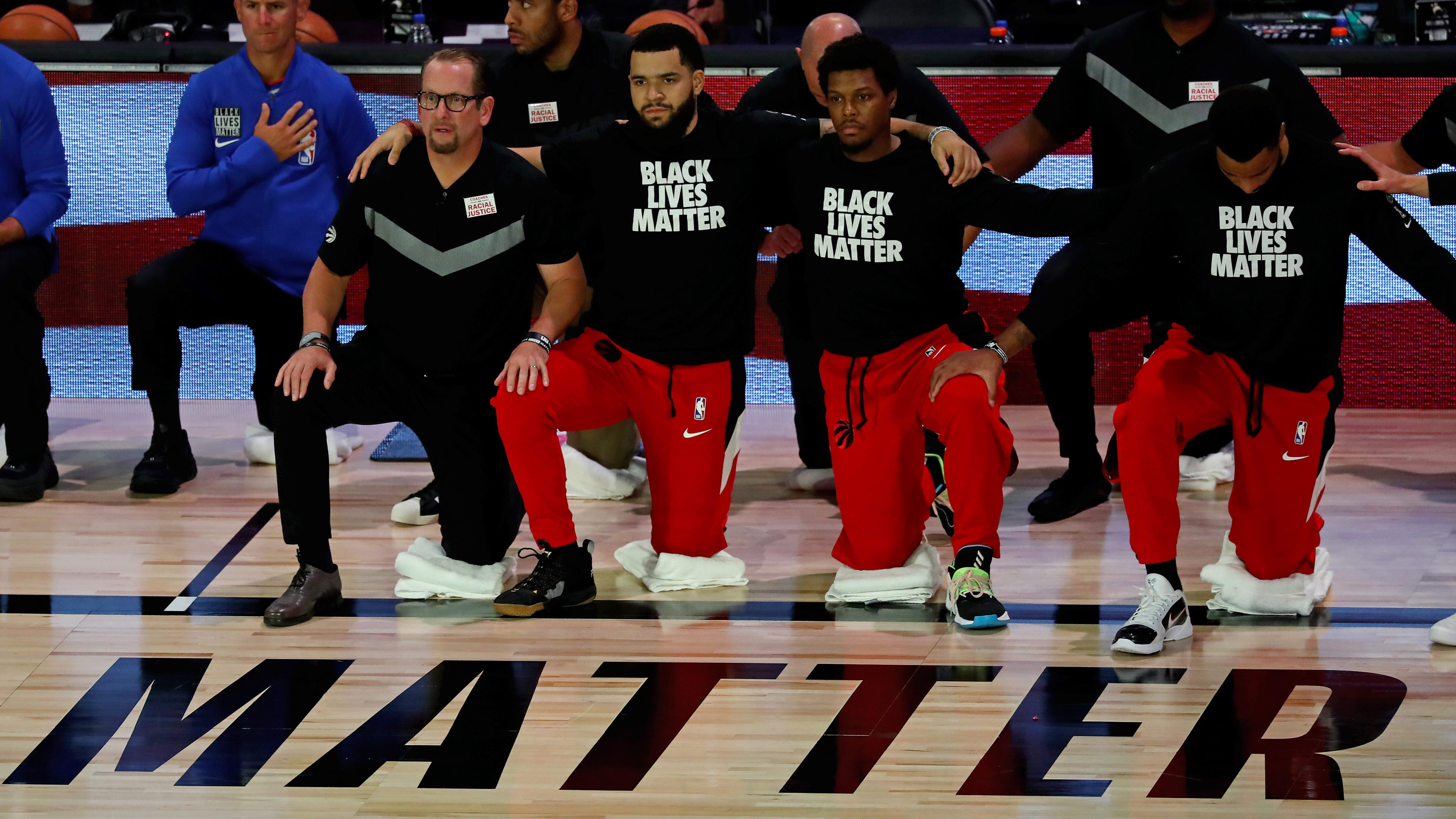 Today’s young Raptors are off to a slow start with a 12-14 record with VanVleet, 2020 NBA All-Star Pascal Siakam and OG Anunoby leading the way. Making matters more challenging for Toronto is injury issues that have sidelined both Siakam and Anunoby for 11 games. VanVleet is ecstatic to be back playing in Toronto and is hopeful these Raptors can turn their season around.

“It’s good to be home,” VanVleet said. “I know our record sucks right now. But it’s good to be back, with our fans in our arena and back to our routine. When you are not there, you just got to trick yourself into making the most of it. So we didn’t really realize how crazy it was to be in Tampa, because we couldn’t focus on that. But when we got back, it was like, ‘Oh, wow. We really played a whole season somewhere else.’ It’s crazy to think about it.

“We got some talent. We got some youth. It’s been fun. I don’t know if it’s because of the season we had last year, but this year has been fun. Just the challenge of trying to get these guys to be great every day.”

Raptors head coach Nick Nurse says VanVleet has had a “natural transition” as the team leader with Lowry gone.

“Fred probably has a little more added scoring pressure than Kyle has ever had,” Nurse said. “We needed Kyle to score some, but Fred has been the focal point with all the injuries. It piles up on him a little bit. Teams are game-planning [for] him. We are seeing lots of blitzes. It’s not easy for him to provide that punch with the game plans he is seeing.”