NEW ORLEANS — A brightly smiling Karl-Anthony Towns humorously spoke about the positive effects lots of coffee had on his play after a recent win over the New Orleans Pelicans. Winning, playoff hopes and a growing bond with his likable teammates have the Minnesota Timberwolves star truly enjoying the game right now.

And considering the pain Towns has endured since the death of his mother last year, being happy on the hardwood has helped him become happier in his life.

“I got a lot to be happy about in life,” Towns told The Undefeated after earning 28 points and 10 rebounds during a 110-96 win over the Pelicans on Nov 22. “There are a lot of things that can go wrong, but I’m just worried about the good that can come out. I don’t think it’s fully back.

“It’s waves. It’s a bunch of waves. I am on a good wave right now where I am feeling positive. The team is winning. A winning streak [helped] a lot. But, I feel really good.”

Towns’ smile and positive outlook are a welcome sign now for the Timberwolves after he endured his mother’s death on April 13, 2020. Jacqueline Cruz-Towns died due to COVID-19 complications that lasted for about a month. She was 58 years old, and the vaccine was months away from being readily available at that time.

Towns told The Undefeated he forgot about his 26th birthday on Nov. 15 until he was reminded about it by his girlfriend, Jordyn Woods, who celebrated it with him. The reason why it slipped his mind was because it was his mother who always made his “birthday special.” Towns said he still has a big piece of his last birthday cake that his mother gave him in 2019 in his freezer that means the world to him.

“I know it’s not good to eat, but it’s a memento as one of the last things she gave me,” Towns said. “Birthdays and stuff like that haven’t been really special to me, because she was the one who made it really special for me. She was the one who got me amped to have a birthday or to have that moment. But my girl did an amazing job of filling her shoes in and making it special.”

Towns also told The Undefeated that holidays don’t feel the same without his mother and she always made Thanksgiving special. The 2015-2016 NBA Rookie of the Year said last week he was planning to spend a relaxing Thanksgiving alone, with space to reflect on his mother.

“I’m going to spend some time with myself, realign, have a spiritual day and pray a lot, have some spiritual moments with my mom, hopefully,” Towns said. “And just really chill. Have some leftovers, maybe, whatever it be.”

Towns believes the Timberwolves are also in the midst of a special season in the making. Minnesota (11-10) has won seven of its last eight games after Monday night’s 100-98 victory over the Indiana Pacers.

His lone NBA playoff appearance was a five-game, first-round appearance in 2018. The Timberwolves have not been over .500 in the three seasons since then. The two-time NBA All-Star has also had a long list of teammates and four different head coaches since 2015.

Towns won three New Jersey state championships at St. Joseph High School. The 6-foot-11, 248-pounder went 38-1 and played in the Final Four as a true freshman at the University of Kentucky in 2015. But since coming to the NBA, “it’s a new feeling,” Towns said.

“I thought I had that LeBron [James] effect. I could come in and just do it by myself. But this is the NBA. You realize you really can’t do it by yourself.

“It takes a team of people who are willing to sacrifice and be the stars in their roles to really make winning happen. And it takes more than one person. And especially in the league, we’re talking about we’re playing now, it takes two, three superstars to have a chance.”

The Timberwolves now appear to have three needed superstars in Towns, 2019 NBA All-Star D’Angelo Russell and rising star Anthony Edwards. Along with Minnesota’s three stars, Towns added that a talented supporting cast, solid defense and great coaching staff should propel the franchise back to the postseason. 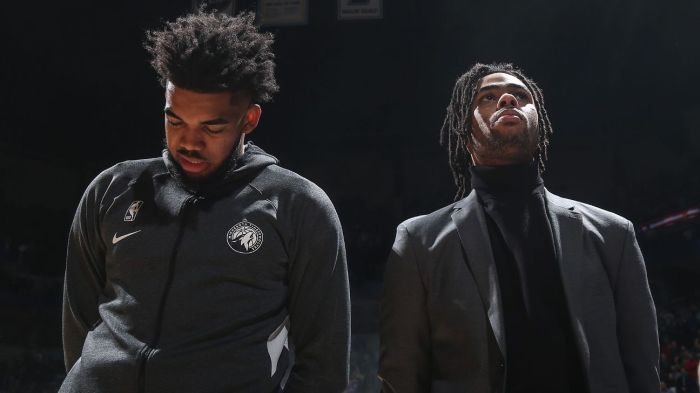 Karl-Anthony Towns, D’Angelo Russell have overcome the uncomfortable to use their voicesRead now

Towns is averaging 23.5 points and 9.0 rebounds per game this season. Edwards, meantime, is averaging 22.0 points and 6.7 rebounds, and was described as “special” by Towns, while Russell is averaging 19.4 points and a team-high 6.1 assists. Towns added that this team has a great encouraging spirit, the best chemistry of any team he’s been on in Minnesota, and credited newcomer Patrick Beverley for bringing everyone together for dinners and other outings.

“We hang with each other,” Towns said. “No other team I’ve played on got along so well.”

Towns said that he also is building a great relationship with Timberwolves second-year head coach Chris Finch, and that part of his strength is transparency with the players and open dialogue. Finch added that he has noticed more happiness from Towns than a season ago.

“There’s just way more joy in his game,” Finch said. “Just comes to work happier. He likes his team. He likes the fact that we’re winning, that we’re competitive every night. He’s come into this season with the mindset to get back to what he feels he is in this league, which is an All-NBA-caliber guy. That’s his mission and he’s been a joy to coach since I got here, and this year he’s really, really focused and seems happy.”

What will keep Towns happy and smiling after enduring so much pain on and off the court is winning. Not being an All-Star again or the accolades that come with stardom. Winning.

“I’m more worried about the playoffs,” Towns said. “The way I perform every year of my career, I’ve been more than deserving of All-Star. So, I’m not worried about that. I just want to win. If you really want to, you can talk about All-Stars. In my experience, no matter what the stats you get, no matter how well you playing, no matter how historic your numbers are, it’s all about: Is your team winning or not?”