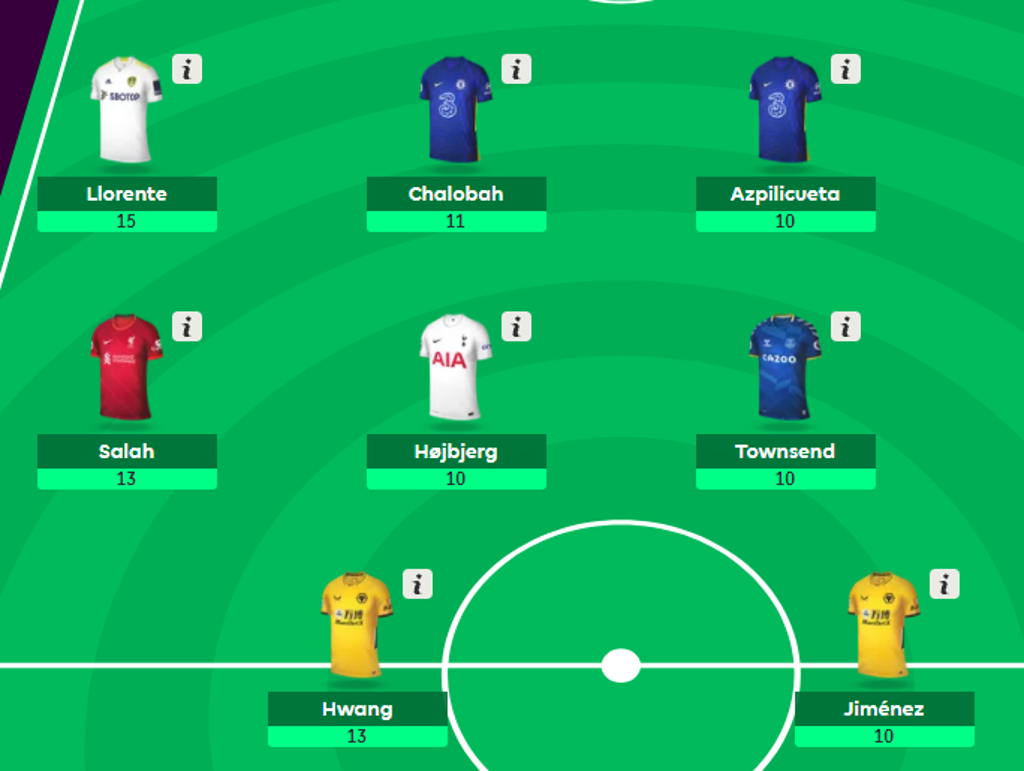 It was another difficult weekend for Fantasy Premier League managers but those with Mohamed Salah – which at this point is the majority of FPL players – were relieved to see the Liverpool star deliver once again to salvage some much-needed points in gameweek 7.

Salah scored for the fifth gameweek in a row to continue his sensational start to the season and also bagged an assist in Liverpool’s thrilling 2-2 draw with Manchester City on Sunday.

FPL managers with Cristiano Ronaldo could only watch as the 36-year-old was benched for the first time in the Premier League this season in Manchester United’s 1-1 draw with Everton, eventually coming on to little impact in the 60th minute to blank for the second gameweek in a row.

Michail Antonio and Romelu Lukaku – the next two most-owned players in the game – also blanked despite having favourable fixtures, but there were plenty of points available elsewhere in the league, and at low costs too.

Here’s the FPL team of the week.

It is not advisable to have a Norwich goalkeeper or defender in your FPL line-up, but this week was the exception. After conceding 16 goals in their previous six games, the Canaries kept a clean sheet at Burnley as they picked up their first point of the season. Krul was boosted by making five saves at Turf Moor and earning two bonus points.

The top-scoring player of the week, the Leeds defender scrambled in a first-half goal from a corner before shutting out Watford and Ismaila Sarr in the 1-0 win at Elland Road. This was Leeds’ first clean sheet and Llorente’s first 90 minutes of the campaign, so this haul was far from expected.

Continuing to show great value as a Chelsea defender under £5m, Chalobah played his third 90 minutes of the season and scored his second goal of the campaign in the 3-1 win over Southampton. The 22-year-old is one to keep an eye on as his price is rising fast, even if he is not always guaranteed a start.

Along with Antonio Rudiger, Azpilicueta was one of the most transferred-in players of the week due to Chelsea’s home fixture against Southampton. The Blues failed to keep a clean sheet as they conceded only their third goal of the campaign, but Azpilicueta delivered in an attacking sense, making assists for Chelsea’s two late goals from wing-back.

Burnley kept their first clean sheet of the season in the 0-0 draw against Norwich, which was good news for managers who had persevered with any of their defenders despite their winless start to the campaign. The left-back’s score was boosted by three bonus points, giving him the edge over the other low-cost option in Matthew Lowton.

The most popular player in the game delivered for their fifth gameweek in a row and is now 21 points clear of Antonio in the overall points table. The Liverpool star has been a must-have in fantasy since his arrival in the Premier League in 2017 – and this is arguably the best form he’s ever been in.

Hojbjerg scored his first goal of the season as he put Tottenham ahead in their 2-1 win over Aston Villa on Sunday, with a composed finish from the outside of the box. The midfielder is a low-cost option but is virtually guaranteed to play every week for Spurs. His general lack of goal involvements mean he is, at best, a good security option for the bench.

The Andros Townsend train is gathering momentum with the Everton winger netting for the third week in four. He has now scored more goals in that spell than in the past two seasons combined. Townsend is enjoying life under Rafael Benitez and produced a composed finish on the break at Old Trafford to earn Everton a point. He’s certainly one to watch with fixtures against West Ham, Watford and Wolves to come after the international break.

The Spurs forward produced his best performance of the season so far as he created both of his side’s goals in the 2-1 win over Villa. While Harry Kane is yet to score this season, Son has delivered meaningful returns in four of the six matches he has played in so far this campaign – which is a solid haul despite the lingering questions of Nuno Espirito Santo’s playing style.

Two composed finishes from the Wolves striker earned his side a 2-1 win over Newcastle, in what was a breakthrough performance from the low-cost attacker. At just £5.5m and with fixtures against Aston Villa, Leeds, Everton and Crystal Palace to come, the South Korean is a good option as his partnership with Raul Jimenez continues to blossom.

The Mexico striker created both of Hwang’s goals in the win over the Magpies as he produced his second significant return in as many weeks after starting the season with five blanks. Jimenez is still working at getting back to his best after his serious head injury last season, and there are early signs that he will be as much of a creator as a finisher this year – which if anything adds more value to Hwang at £2.0m cheaper.