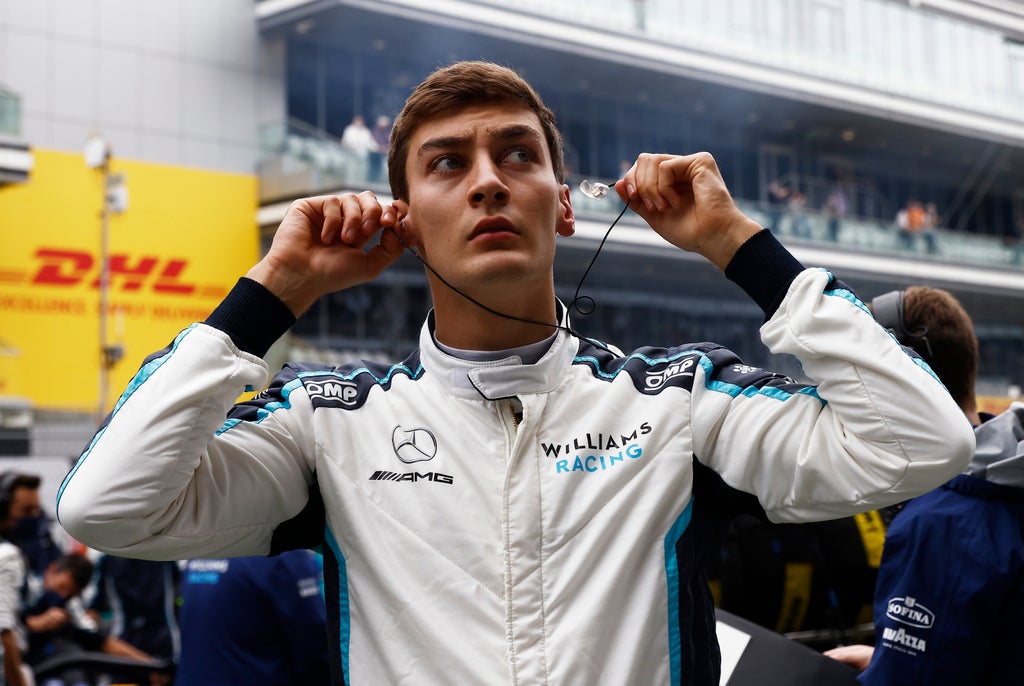 Very few of us really know what it feels like to drive a Formula One car. Even fewer have reached out and touched its outer limits, where the car grabs you by the clavicles and slams you back into your seat. But George Russell was “born” for these moments, he says, and as he describes the blissful feeling of being at one with his F1 car, it’s as if he can feel the steering wheel in his fingers.

“It’s like you’re on the fastest, most exhilarating rollercoaster, and you’re coming up to a turn not necessarily knowing you’re going to come out the other side,” he says. “When you do that it’s incredibly thrilling. That is what a lap feels like every single time you’re pushing that car right to the limits, and you’re pushing it so… so finely that you think it’s enough but you just don’t know. That’s when dialling down into that zone and feeling at one with the car is a really beautiful feeling.”

The adrenaline is addictive, Russell admits, and he was hooked from a young age as he began a fledgling karting career growing up in Norfolk. His reputation as the next big thing spread through the industry in whispers, with a unique talent and a maturity beyond his years: watching back interviews with the 13-year-old George is a little unnerving as a cherubic boy speaks with the earnest clarity of a seasoned athlete.

Russell’s rapid rise saw him reach F1 in 2019 and impress in a challenging Williams car, and soon he will take another enormous step when he joins Mercedes next season to drive alongside his idol, Lewis Hamilton. “As I was going through my karting days he was the driver I looked up to. Next year I’m in an incredibly privileged position to go up against the greatest of all time, to learn from and to hopefully make me a better driver, and to test myself against.”

Earlier this year Russell made a joke out of barely featuring in Netflix’s highly successful series Drive to Survive – sport’s closest answer to Succession filled with drama, tension and rich people getting angry with one another. The show has reached new audiences – “They’re showing a different light to the sport and it’s definitely entertaining watching,” he says – but Russell will no doubt be a lead character of season four when his switch to join Hamilton at Mercedes makes for a major storyline.

Their relationship goes back further than Hamilton knows, to a wonderful photo in 2009 featuring an 11-year-old Russell in the background under a mop of hair, waiting patiently for a signature from the world champion. Now 23, Russell is about to be thrust further into the foreground than ever before. How does he feel about a spotlight which will only grow brighter as he challenges for world championships?

“I’m a racing driver and I just want to go racing, and if I was being totally selfish that’s all I would do, but obviously there’s a lot more that comes with it,” Russell says. “The sponsor events are a huge part of it because ultimately we can’t go racing without sponsors and partners. But I was brought up to be a racing driver, not a public speaker. In a way you’re born to be in a racing car, not to be in front of the camera, but you get to this level when you’re almost expected to do both.”

His move to Mercedes will propel him into a new stratosphere of scrutiny and attention, but there is opportunity to be had on and off the racetrack. Recently he was at the James Bond premiere, a chance to take his girlfriend on a date worthy of real F1 glamour. “It was a cool experience,” he says. His girlfriend works in finance in London but has travelled to plenty of races this season. “She lives and breathes the sport with me and she often has to make the same sacrifices as I do, whether that’s going to bed early or having a strict diet, not going out for drinks with my mates, or if I do then keeping it clean. She supports me in that so there’s got to be some upsides, I guess.”

He plans to move to Monte Carlo too, but the reality of life as an F1 driver, he insists, is not all that luxurious. Airports and hotel rooms merge into one. “Don’t get me wrong, there is a lot of glamour to it, and it could be much, much worse, but we don’t go sightseeing, we don’t go to fancy restaurants, we don’t do any of that. Having experienced some of the world it’s really a beautiful place and I’d love that opportunity to go out there with free rein and visit it, but at the moment my priority has just been to be the best driver possible.”

His focus is on finishing his Williams era strongly. There are six more races left this season, starting with the US Grand Prix this weekend, meaning six more opportunities to deliver points before beginning a new chapter, when the parameters of success will change. The feelings will be much the same, though, and for all the trappings that come with Formula One, the racetrack is Russell’s happy place. You only need to listen to him talk to understand that much.

”The thrill of trying to drive a perfect lap, coupled with the speed, it almost takes your breath away,” he says, eyes drifting into middle-distance, fingers back at the wheel. “I’d love to know how little we breathe through a lap because you’re constantly holding your breath and bracing through these corners. And then the cognitive side of it, that concentration of knowing when to break, how much speed you can carry through the corner, the switches to change on your steering wheel, talking with the engineers through the lap, managing the tires, managing the brakes… You’re not just a wild animal who’s thrown into this beast, you’re threading the needle.”