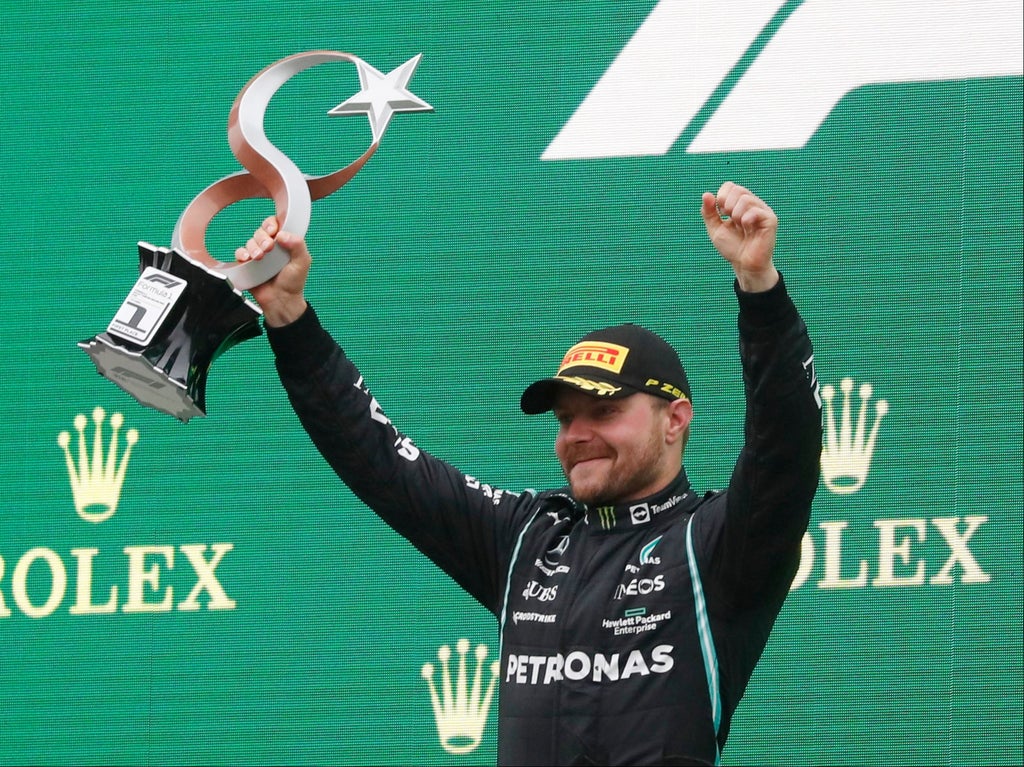 A furious Lewis Hamilton surrendered the world championship lead to Max Verstappen after finishing fifth at the Turkish Grand Prix on Sunday.

Valtteri Bottas took the chequered flag at a damp Istanbul Park ahead of Verstappen and Sergio Perez, with Ferrari’s Charles Leclerc fourth.

But Hamilton, who started only 11th after an engine penalty, pointed the finger at his Mercedes team for putting him on to new tyres in the closing stages.

Hamilton was on course to finish third with the same rubber he started the race on, before Mercedes’ safety-first approach.

Hamilton questioned the decision to stop and snapped “leave me alone” when race engineer Peter Bonnington informed him of the gap to Pierre Gasly in sixth. “S***, man, why did you give up that place?” he added.

Had Hamilton finished third, he would have been a sole point behind Verstappen. As it stands, he is now six points adrift.

Hamilton qualified fastest here, but was thrown back 10 places after he incurred a grid penalty for taking on his fourth engine of the campaign. The world champion hoped it would rain, and his wishes were answered with persistent drizzle in the hours before the race creating a damp track.

A chaotic start was anticipated but Fernando Alonso was the only victim after he was tagged by Gasly. The double world champion called the Frenchman “stupid”, and Gasly was handed a five-second penalty, while Alonso was later dealt the same punishment after crashing into Mick Schumacher.

Up front, Bottas sped away from his marks, keeping Verstappen and Leclerc behind with Hamilton tip-toeing his way around the first bend.

Alonso’s spin elevated the Briton one place to 10th, and by the end of the first lap he was ninth after he passed Sebastian Vettel at the chicane. On lap eight, Hamilton put his Mercedes machine on the line with a fine move around the outside of Yuki Tsunoda at the left-hander third corner.

A lap later, he waltzed past Lance Stroll at the same corner for seventh, leaving him 20 seconds behind team-mate Bottas. Lando Norris was Hamilton’s next target and he cruised past his British compatriot on lap 10.

Hamilton turned in a hat-trick of fastest laps – a second faster than Verstappen – before sailing past Gasly for fifth, with Perez seven seconds up the road.

By the end of lap 34, Perez was in striking range. Hamilton drew alongside Verstappen’s Red Bull team-mate with the two drivers going wheel-to-wheel.

Hamilton was marginally ahead going through Turn 13 only for Perez to retain the inside line and then out-brake the Mercedes man on the run down to Turn 1.

It was a marker from Perez, clearly under instruction from Red Bull to ensure Hamilton did not get past.

With a dry line failing to emerge, Verstappen was the first of the leaders to stop for new intermediate tyres on lap 36. The Dutchman emerged from the pits ahead of Perez and Hamilton.

Bottas followed suit a lap later with Leclerc assuming the lead. Red Bull then called Perez in, and Hamilton looked set to stop, too, but the seven-time world champion told his Mercedes crew he did not want to.

His Mercedes pit crew retreated with Hamilton reiterating his desire not to stop.

“It feels like we should stay out, man,” he said. Bonnington responded: “We will stay out one more lap to give us a bit more thinking time.”

Up front, Leclerc was unable to make the strategy work and when Bottas passed him for the lead with 11 laps to go the Ferrari driver came in for a change of rubber.

That promoted Hamilton to third but with eight laps to go, he was ordered to come in, dropping him two places and damaging his title hopes.