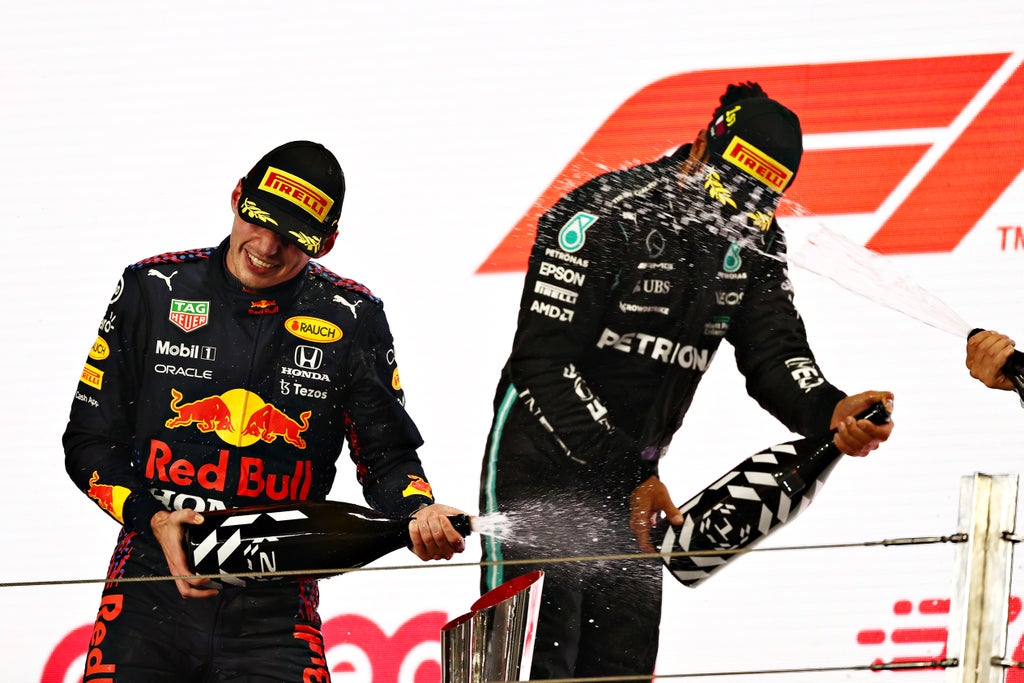 Lewis Hamilton took another big step to hauling in Max Verstappen as a gripping battle for the Formula One world title neared a conclusion after the Qatar Grand Prix.

The seven-time world champion is now within eight points of the Dutch driver after an excellent drive that saw him dominate from start to finish after claiming pole position with a sublime qualifying performance.

Verstappen did his best to limit the damage though, rising from seventh on the grid after a five-place penalty to finish second, while also salvaging his day further with a valuable late point added for the fastest lap. There was some nostalgia too, as Fernando Alonso claimed a first Formula 1 podium in seven years to deliver for Alpine, doing enough to seize the highest rating in Indy Sport’s Qatar Grand Prix driver ratings.

Verstappen appeared to be upbeat after the race, perhaps seizing a morale victory with the additional bonus point for the fastest lap: “Our starting position was a bit compromised but luckily we had a really good start. I got quite quickly back to second and to get the fast lap was very nice. It’s going to be difficult to the end but that’s nice, it keeps things exciting. This track is a lot of fun to drive. it’s really quick. I feel good, it’s going to be a tight battle until the end.”

Here’s all the latest F1 news and reaction from Qatar as the builld-up to Saudi Arabia begins:

Fernando Alonso was unquestionably the most impressive driver on track at Losail on Sunday and fully deserved the praise he was given by fans and pundits and alike.

Sergio Perez made the most overtakes of anybody while marching through the field from eleventh on the grid, and could have taken third-place himself if Red Bull hadn’t opted to pit him for a second time.

Meanwhile, the likes of Pierre Gasly, Daniel Ricciardo and Yuki Tsunoda will have been disappointed to finish outside the points.

But how did each of the drivers rank in comparison with one another? Take a look at our full driver ratings for an in-depth assessment of all 20 men:

Wolff says pressure explains why Horner was “naughty” in Qatar

Mercedes team principal Toto Wolff says the pressure of the title fight may have been behind his Red Bull counterpart Christian Horner being “naughty” in Qatar, referring to comments the 48-year-old made about volunteer marshals which landed him in hot water with the FIA.

Horner was summoned to the stewards and given a formal warning for breaching the international sporting code after criticising what he referred to as a “rogue marshal waving a yellow flag” following Max Verstappen’s grid penalty.

“I think that there is a lot at stake. in a way I don’t even want to comment on him because we are all responsible for what we say and what we do,” Wolff told the media at the Losail circuit after Lewis Hamilton took a second successive win ahead of Verstappen. “[We all] have our own pressures and that is certainly very high.”

“I haven’t even heard or read what he said, only that he was naughty,” the Austrian smirked.

Alonso reaching “another level” with podium and 2022 plans

Fernando Alonso says he feels he is reaching “another level” after his best result of the season in Qatar, and is stepping up his preparations for a competitive year in 2022.

Next season will brings a major set of regulation changes for Formula 1 team, which means each time will run entirely revamped cars which will look significantly different to this year’s machinery. That presents an opportunity for the running order to be shaken up, and midfield squads like Alpine will be looking to use the changes to shoot up the grid and challenge for race wins.

Speaking to the media after securing his first podium since Hungary in 2014 with Ferrari, Alonso said: “As a weekend in general, this one was the best [of the season so far] because Friday, Saturday, Sunday, it was very consistent. I think the last part of this 2021 for sure is another level compared to the first part, so I’m happy with this year of comeback and the preparation into next year is definitely another level now.

“I think [the regulation changes are] a reset for everybody and it’s up to us to produce a fast car. I feel strong, I feel ready to take the battle and let’s see.”

Lando Norris was one of four drivers whose struggle with tyre failures cost him big time at the inaugural Qatar Grand Prix.

The 22-year-old was brought in for a late pit stop by McLaren after they spotted signs of a slow puncture, meaning ninth was as high as Norris could finish despite starting fourth. Nicholas Latifi and Valtteri Bottas saw their races ended by damage caused following failure son their front left tyres, while George Russell also suffered a puncture but was able to bit and continue.

Norris believes the blame lies with Pirelli, and wants the Italian manufacturer to make improvements for the future.

“You don’t expect the tyre to blow up,” he told reporters in the media pen after the end of the race. “Especially not on the hard tyre. We weren’t even that far into the stint, it was 20 laps or something, and the tyre should do over 20 laps.

“They should make the tyres better. It’s dangerous for us as drivers, we risk a lot every time.”

Ricciardo had to save fuel from the start in Qatar

Daniel Ricciardo finished outside the points in his McLaren for the third consecutive race as his difficult continued in Qatar.

The Australian has been off the pace of team-mate Lando Norris all season long and struggled in qualifying, missing out on a Q3 appearance and starting the race in P14.

From there he struggled to progress up the order and could only muster 12th by the time the chequered flag was waving, but the 31-year-old said some intense fuel saving was partly to blame.

“After the start we had fuel saving from super early in the race,” he told reporters at the Losail circuit. “I started doing what I thought was already a lot but it was not enough. I think at times we were losing probably two seconds a lap fuel saving and with that, brakes get cold, tyres get cold, and you lose grip as well, so it’s just kind of a downward spiral.”

Christian Horner’s outburst at a “rogue marshal” is simply “not accepted”, the FIA has confirmed.

The Red Bull team boss was criticised volunteers working for Formula 1 at the Qatar Grand Prix live on Sky Sports F1, incensed after Max Verstappen was given a five-place grid penalty for ignoring double yellow flags during the final part of Saturday’s qualifying session.

Horner was summoned to the stewards for breaching the international sporting code afterwards and, as part of a settlement with the FIA, accepted a formal warning and apologised publicly on television. He blamed the nature of his comments on being “under the pressure of competition”.

FIA Race Director Michael Masi, though, criticised Horner in the aftermath, saying: “I think you should not attack any person. Especially when we have thousands of volunteer marshals around the world, that give up a huge amount of time globally.

“Without them this sport that everyone has very close to their heart, and all of them give up a huge amount of their time, won’t happen. I will defend every volunteer official and every official at every racetrack around the world, and stress that this is not accepted.”

DRS more powerful than ever in Qatar

The Losail circuit in Qatar proved popular in qualifying, with its high speed corner challenging the drivers to carry as much speed as possible throughout the entire lap.

Drivers like Daniel Ricciardo labelled it “a lot of fun”, but in the race things were different.

The track is narrow and suffers from a lack of heavy braking zones, meaning that the only real opportunity for overtaking was down the pit straight.

Now, some overtakes are better than none, certainly, even if they all take place at the same spot on track. But the drag reduction system (DRS), which allows cars within a second of the driver in front to open the rear wing flap for an extra straight line speed boost, was so powerful that no driver was able to put up a decent defence.

DRS has been criticised by pundits and fans in the past for creating ‘artificial’ overtaking manoeuvres, but without it the order would barely have changed in Qatar.

You can read a full explanation on how the system works here:

Hamilton kept off the kerbs to avoid puncture worry

Lewis Hamilton was never worried about suffering a puncture at the punishing Losail circuit despite team-mate Valtteri Bottas’ race ultimately being ended by one.

The Qatar track was making its Formula 1 debut after hosting MotoGP races for 17 years and the rough kerbs at the track caused damage to plenty of cars throughout qualifying and the race.

The Briton, though, explained that he stayed away from the kerbs throughout the entire Grand Prix and never felt he was at risk of a tyre failure.

“I mean, I wasn’t [worried]. I was managing quite well, I wasn’t on any of the kerbs, so it wasn’t a concern for me. I assumed [the punctures] were coming from people running on the kerbs but I was never near any of them, that wasn’t an issue.”

Alonso planned to overtake Hamilton for the lead in Qatar

Fernando Alonso may have been left “very happy” after securing his first podium in seven years on Sunday afternoon, but the Spaniard had his sights set even higher originally.

The Spaniard started third on the grid after penalties for Valtteri Bottas and Max Verstappen saw them demoted, and the Alpine driver was able to pass Pierre Gasly at the start to move up to second.

“Honestly I thought to be leading after Lap 1,” he told Sky Sports F1 on his way to the podium. “I thought with the red [soft] tyre I could have a go on Lewis, but I couldn’t. “Obviously the win is the win, so [a podium] cannot rank too high. But this is like… finally!”

Mercedes to use fast Brazil engine in Hamilton’s car again

Mercedes will return to using the engine which helped Lewis Hamilton slice through the field at Interlagos at Jeddah next time out.

The Saudi Arabian circuit is making its debut on the Formula 1 calendar but seems to favour the Mercedes machinery over the Red Bull car thanks to its high speeds and long straights.

The fresh internal combustion engine Hamilton used in Brazil cost him a five-place grid penalty but that punishment was worth it as his top speed far out-stripped the pace of every other car on the grid. It was removed for Qatar in order to prolong its lifespan for the final two races.

Trackside engineer Andrew Shovlin told reporters in Qatar: “We’ve seen pretty big swings of performance over the recent races, [but] if we look at the track in Saudi, I think it should suit us. For Lewis, we have got the more powerful engine to go in the car, so that’s going to give him a useful engine.”