‘There was always going to be a fall guy’: Ally McCoist and Kenny Miller express sympathy for Aaron Ramsey as his penalty miss costs Rangers in Europa League final… insisting he will be ‘devastated’ after fluffing his lines

By Oliver Salt For Mailonline

Rangers legend Kenny Miller insists Aaron Ramsey will be ‘devastated’ after he missed the fatal penalty in their Europa League final defeat, but Ally McCoist stressed that someone had to be the ‘fall guy’.

They could not be separated after another 30 minutes, meaning the lottery of penalties was required to settle it. 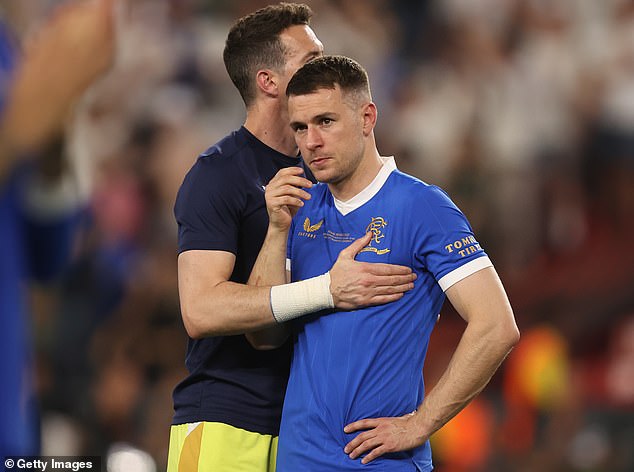 In the end it was Frankfurt who prevailed, with the only miss of an otherwise-perfect shootout coming when Ramsey failed to convert Gers’ fourth penalty.

Borre went on to bury the winning spot-kick, coming as a devastating blow to the Scottish club and, in particular, Ramsey.

The Welshman’s missed effort proved decisive, as Frankfurt tucked away five superb penalties to ensure they lifted the trophy in Seville.

After Ramsey’s penalty cost his former side, McCoist said on BT Sport: ‘There was always going to be a fall guy, I think he tries to lift it and he does not get enough on it.’ 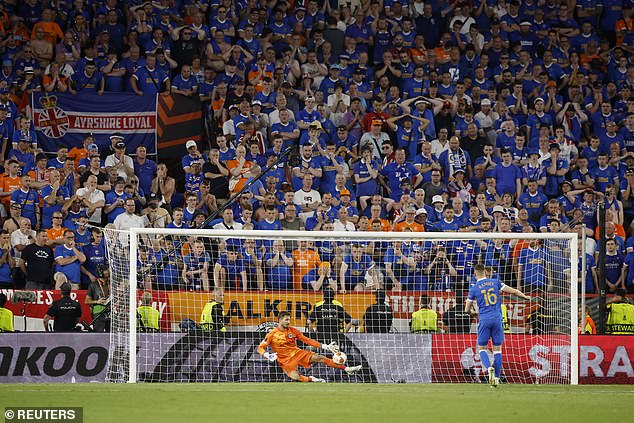 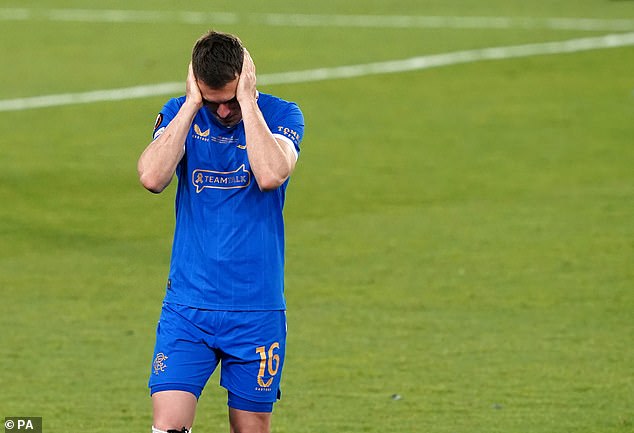 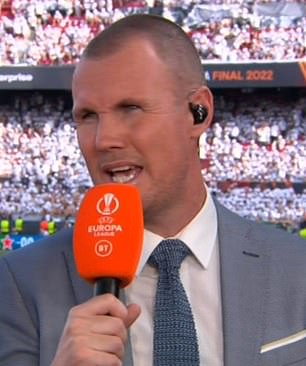 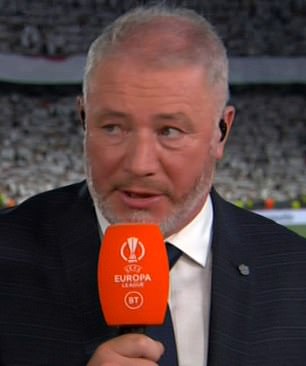 His co-pundit Miller then added: ‘You need to get a bit of height when you are going down the middle, if he does get it down there it is a goal but he pulls it ever so slightly and the keeper gets to it because he hasn’t quite got the height.

‘There is always going to be someone who misses. He will be devastated. Anyone would be.

‘He will be gutted for everyone, he wanted success at Rangers and tonight was a huge opportunity.’

It has been a difficult campaign for Ramsey, who has made just 13 appearances all season due to injury, and the penalty miss against Frankfurt marks the nadir of his stint at Ibrox.

But former Tottenham midfielder Jamie O’Hara has called for fans to avoid criticising the ex-Arsenal man, commending him for stepping up from the spot in such an important match.

O’Hara wrote on Twitter: ‘No abuse for Ramsey please, had the bottle to step up and take a huge penalty the odds are in the goalkeepers favour, he will be devastated and need support, gut wrenching #Rangers’.

Former Scotland winger Pat Nevin, however, says Ramsey will now have to live with the miss ‘for the rest of his life, while claiming Rangers will be ‘kicking themselves’ for coming up short.

‘Torture. Every time you lose a cup final is torture. After the work they put in, after the fact they got better as the game went on,’ Nevin said on BBC Radio 5 Live.

‘They really believed. The standard of penalties was astonishingly high except for Ramsey. He has to live with that for the rest of his life.

‘What an opportunity Rangers had. They’ll kick themselves. It was there to be won.’