‘There’s potential. This team was second’: Erik ten Hag offers Man United’s flops a lifeline in his first interview as their new manager… but warns ‘good isn’t good enough’ as he demands a ‘dominant and dictating team’

Erik ten Hag has offered a lifeline to Manchester United‘s underperforming flops – but warned good ‘will not be good enough’ in his tenure in the Old Trafford hotseat.

Speaking in his first interview as United’s new manager, Ten Hag highlighted the ‘potential’ in a team that finished second in the Premier League last season but endured a dismal 2021-22 campaign, which resulted in their lowest points tally.

The Dutchman, who has signed a three-year contract with an option for a fourth, said his ambition at the club was to play ‘dominant and dictating football’ and to bring entertainment back to Old Trafford after a tumultuous period on and off the pitch. 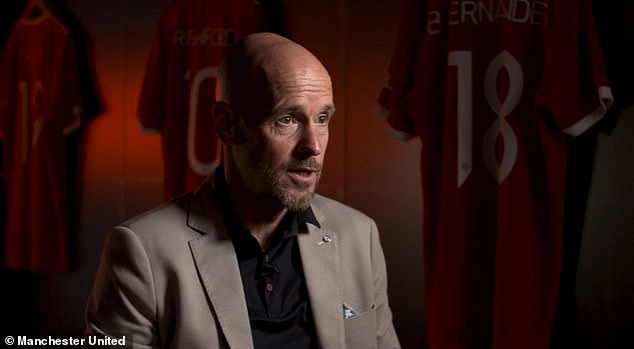 Asked what he sees in the future for United, Ten Hag said: ‘ ‘It’s first: accept the current situation but also know one year ago, this club, this team was second in the Premier League.

‘There’s potential and now it’s up to us to get that out. It’s a process, it will take time but I’m convinced we will come to that point where we get success. We have to work hard and it has to be based on the right philosophy and strategy.’

Ten Hag, who has added Mitchell van der Gaag and Steve McClaren to his backroom staff after officially taking over from interim boss Ralf Rangnick, conceded it would be a ‘big challenge’ to turn around the club’s fortunes.

‘We want to make the fans proud,’ he said. ‘Second, of course we are in this moment, the current situation is obviously not that good.

‘It’s a big challenge. I want to build and construct a team who are battling for each other, who are unified and who will get results.

‘I have high expectations from myself and that is also what I demand from my squad. They have to co-operate together and they have to give every day their best. And I would say, for me, good is not good enough. We have to do better.’

Ten Hag said he was hoping to bring the style that brought Ajax success, including a third Eredivisie title, to his new club.

‘The way we did it – with dominant, dictating football – that is the way I want to act in Man United as well,’ he added. ‘But finally the competence and the quality of the people – so the players – decide how you have to play.’

United are set to undergo a significant overhaul of their squad in the summer, with a host of players – including Paul Pogba and Edinson Cavani – expected to leave.

The Red Devils have been criticised for a series of poor displays this season, with some claiming they have thrown in the towel during matches, and Ten Hag said he expects more fight from the players under his leadership.

‘Everywhere I was in my career, I have high demands on my players,’ he said.

‘I expect them to fight and give 100 per cent. I already mentioned that only good is good enough. No, not only that – we have to do better and they have to co-operate. They have to be unified, to form a team, and to battle the opponent.’