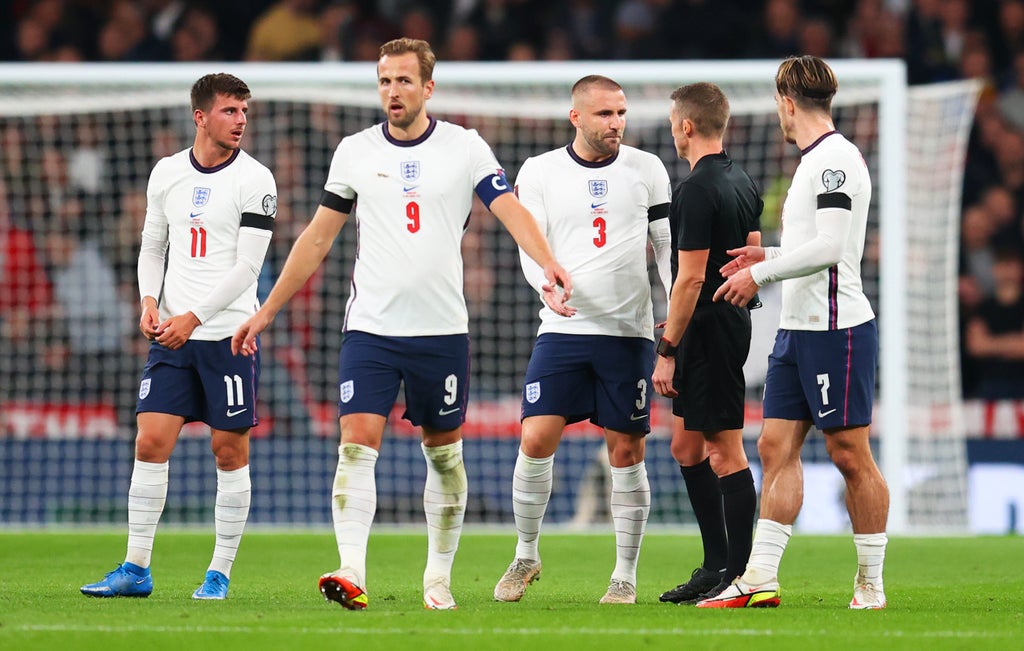 England’s hopes of qualifying for the World Cup remain in their own hands despite a disappointing draw to Hungary at Wembley.

Hungary took the lead from the penalty spot after Luke Shaw was penalised for a high foot when making a clearance in the box, but John Stones equalised when he turned in Phil Foden’s free kick before half time.

Raheem Sterling was denied by Peter Gulacsi when he tried to round the Hungary goalkeeper but Gareth Southgate’s side created few chances despite the England manager fielding an attacking line-up.

England hold a three-point lead over Poland in Group I with fixtures against Albania and San Marino remaining.

When England fans saw an attacking line up of Phil Foden and Mason Mount behind a front three of Harry Kane, Jack Grealish and Raheem Sterling, many would have been expecting to see the goals continue to rack up in World Cup qualifying.

Southgate himself described it as an “exciting” selection, as the England manager acted on his plans to take England to the next level in terms of attacking play – but England did not have it all their own way at Wembley.

That is to the credit of Hungary, who have been in dire form since the Euros but arrived with a plan to flood the central areas, deny England space and block the passing lanes into Foden and Mount.

The visitors were also able to break forward quickly when they pressed and won the ball back. It was a test of England’s balance in midfield but they generally recovered well and got back into shape, even if Declan Rice looked a little exposed at times.

Key to that is finding the right balance in midfield. While a double pivot of Declan Rice and Kalvin Phillips got the Three Lions to the Euro 2020 final, the England manager has recognised that his team are still short of the quality produced by France and Spain in the Nations League finals this week. But this performance showed that finding the solution isn’t simply fielding all your best attacking options in one go.

Grealish right to be confused by substitution

With Hungary looking to deny England space in the middle of the pitch, Grealish took responsibility by demanding the ball in wide areas and looking to beat his man at every opportunity.

The Manchester City forward was perhaps the brightest of England’s ‘front five’ and he looked threatening when gliding inside in an attempt to unlock the Hungarian defence.

Grealish was particularly influential in the 15-minute spell where England found themselves a goal down and it was his run down the right wing that drew the free kick for Stones’ equaliser.

It was puzzling, therefore, that when Southgate made his first substitution shortly after the hour mark, it was Grealish who turned to see his number being held up. Grealish did not appear to be best pleased with the decision either.

Southgate correct to take off Kane

Although Kane struck against Hungary last time out in Budapest, the England captain did not look like he was about to repeat the trick at Wembley in what was another below-par display from the striker.

Kane has yet to score in the Premier League this season and was quiet at Wembley so it was only correct that when Southgate turned to his bench in an attempt to grab a late winner, his own captain was included in his considerations.

Despite his stunning goalscoring record for England, Kane should not be above being taken off if he is struggling to have an impact on the match and in Tammy Abraham, Southgate had a striker who is in good goalscoring form since moving to Roma.

Abraham was unable produce the winner on what was a disappointing night for England, but the principle of the substitution from Southgate was sound given the options available to him.

Foden and Mount in deeper roles

Of England’s two midfielders either side of Rice, it was Foden who showed the most promise in Southgate’s attacking system. The Manchester City star was England’s best player in the 5-0 win over Andorra on Saturday but the caveat of the quality of opposition remained, so the opportunity to see what he could do from central areas was welcomed.

As mentioned above, Foden was often denied space by a disciplined Hungary team but there were several moments where Foden again drifted inside before playing that lovely clipped ball from the right channel, which he did to great effect on Saturday.

Mount, who is more familiar to the position, was called into doing more defensive work on the edge of his own box than he is used to doing at club level, and did not push as far forward as Foden did.

While Mount remains an important player to Southgate, it was made clear that his best qualities can shine through when he is positioned closer to his frontline and can contribute to his side’s press and combine with those around him.

Another match against Hungary, another night where scenes off the pitch were a prevailing narrative.

The clashes between those in the away end and the police in the first 10 minutes of this World Cup qualifier suggested that the punishment handed out by Uefa following last month’s reverse fixture in Budapest, which was marred by racist abuse of England players at the Puskas Arena, had little impact on those at Wembley. A statement by the Metropolitan Police said stewards were trying to arrest a spectator who was racially abusing a steward.

The clashes also saw Wembley police forced back into the concourse, raising further questions for the FA over the standard of stewarding and crowd management at the national stadium following the debacle of the Euro 2020 final.