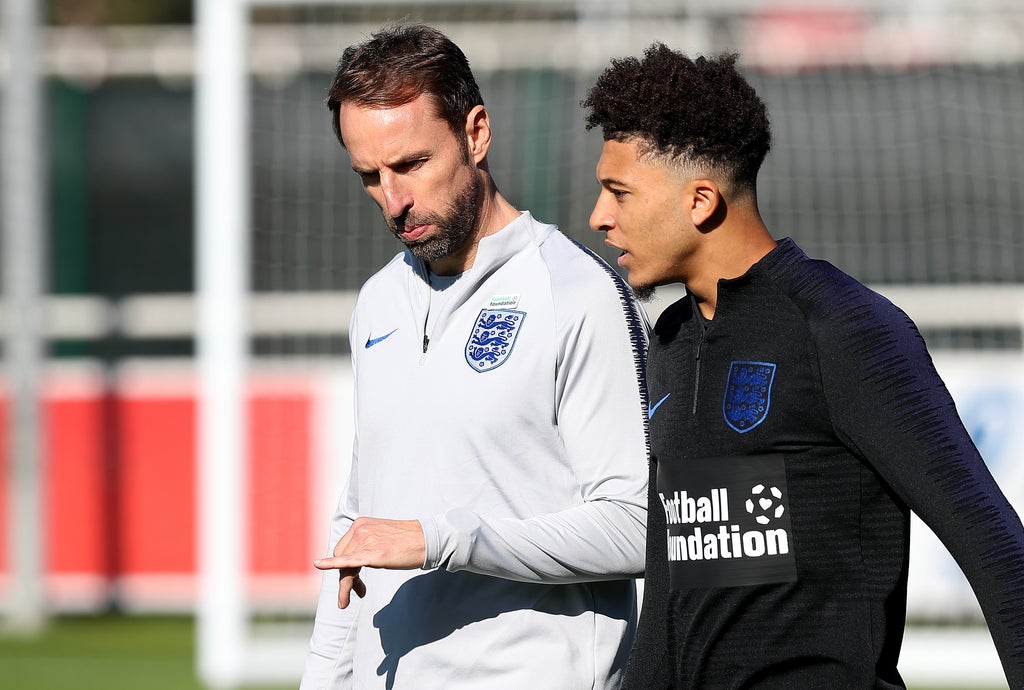 Gareth Southgate has urged patience with Jadon Sancho as the England winger continues to find his feet at Manchester United.

Sancho moved to Old Trafford from Borussia Dortmund during a summer which also saw him racially abused after missing a penalty in England’s shoot-out loss to Italy in the final of Euro 2020.

The 21-year-old has struggled to make an impact since joining United, with Three Lions boss Southgate admitting his form this season was not worthy of an international call-up.

But he included Sancho in his squad to show his “belief” in the the forward, who then started the 5-0 World Cup qualifying win over Andorra on Saturday night.

Albeit against inferior opponents, Sancho provided two assists in a strong 72-minute showing.

“It was not easy for a winger in the game because quite often you are receiving the ball with two, sometimes three, defenders really close,” Southgate said.

“So you’ve got to pick the right moment to set the ball off and the right moments to back yourself to maybe take one or two of those players out and I thought he did that exceptionally well a couple of times.

“It is important that he got the assist because you’ve also got to have that productivity and the right pass or the right cross at the end of those passages of play.”

Southgate confirmed he had taken time out to speak to Sancho since the squad convened at St George’s Park on Tuesday and backed him to show his form in the coming weeks.

“We shouldn’t be surprised that for a young player to have such a big change in his life, new league, new club, different style of play, different training regime, back living in Manchester, moving house and everything that’s involved in that, that’s a lot to take in,” he added.

“So it’s going to need time but he showed a lot of the qualities that he has [against Andorra] and I know that will come with the club as well.”

Southgate also believes Sancho was better off linking up with England during the international break rather than staying at home as he battles with a number of other players to pin down a position in the starting XI.

“There’s always a balance with these things,” he replied when asked if he felt a responsibility to pick Sancho.

“There are times when it is maybe better for a player not to be here and to be able to get settled in at a club. I felt at this moment in time for him that he would benefit from being with us, and also I don’t think anybody else in those positions warranted being in ahead of him at this moment in time.

“That competition is there. For all of the players, there is competition for places. Marcus [Rashford] will be back to fitness soon, but that again is good, it is healthy for our squad, and the reality is we don’t often have many months when everyone is available.

“The summer was one of those rare occasions where pretty much everyone was available if not all fully fit.”

Someone else who clearly appreciated Sancho’s ability was veteran Andorra defender Ildefons Lima.

The 41-year-old made his record 132nd appearance for his country as a first-half substitute against England but limped off just 32 minutes later having seemingly pulled his hamstring while chasing down Sancho.

The comfortable victory against a battling Andorra side keeps England well on course to qualify for the 2022 World Cup.

Victory in the Pyrenees extended their run to 28 World Cup qualifiers without defeat and Southgate was pleased with how his whole squad went about their job at the Estadi Nacional.

“I think these games historically for England teams have been difficult nights,” he added.

“I’ve sat at home and watched some of those. What I like about this group is that whatever the challenge, whatever the environment that they’re put into, they don’t make any excuses.

“We find a way to win the games and we used the ball really well. We showed good discipline because one of the ways the opponent has a chance is if they get you down to 10 men and there were plenty of flashpoints where we could have reacted in the wrong way.

“In the main we did that well. But the quality of our play was really good and we picked a team to of course manage the whole squad, but also with profile of players in certain positions that we knew would be well-suited to getting in between their defensive midfield and also good in the one-on-one situations wide.

“I’m really pleased with both the quality and the application of all the players.”