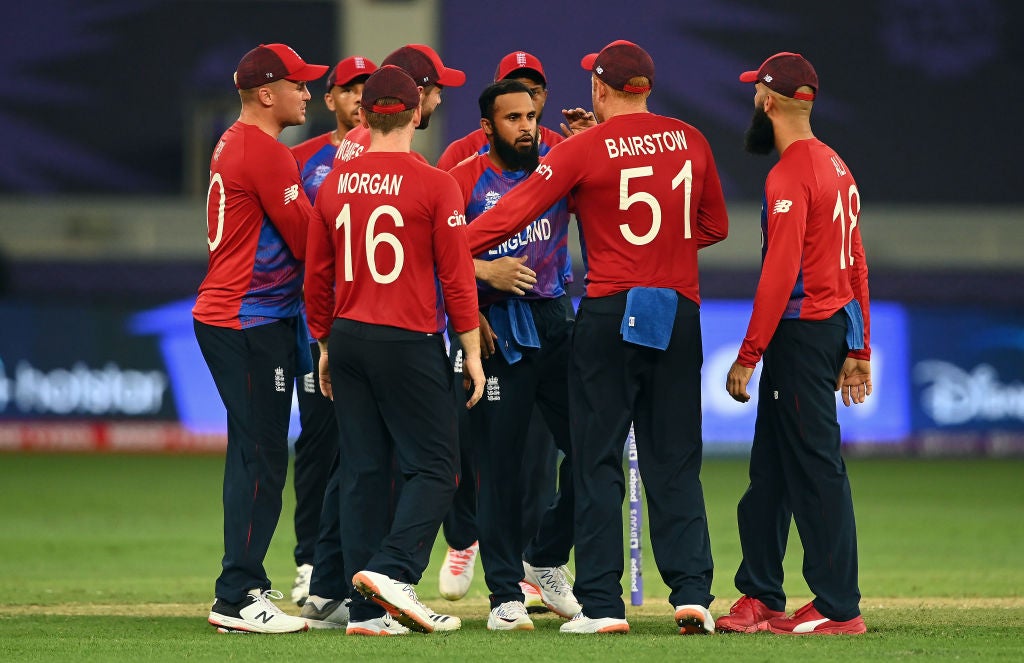 How about that for a statement win? England’s men got their T20 World Cup campaign off to a flying start, running roughshod over the West Indies to bowl them out for 55 then reaching their target with 70 balls to spare.

They did lose four wickets in the process, though the clinical performance with the ball meant there was never really any jeopardy when West Indies picked away at their top order. Leg spinner Adil Rashid typified their dominance, finishing with the absurd figures of four for two, the best he has returned across all 203 of his Twenty20 matches.

This was less a repeat of the 2016 World T20 final, more a rehash. Five years is a long time in cricket, and even longer in T20 given how the format has evolved. And time looked to have aged West Indies more than England. This 55 is their lowest total at a World Cup and second-lowest in all T20s. There were questionable shots, no doubt, with only Chris Gayle (13) registering double figures. But England were relentless, both with their fielding and execution of every tactic and match-up, and have sent a clear message to their rivals at this competition.

Eoin Morgan opted for a batting-heavy XI, and chose to chase after winning the toss, wary of the dew that would have come had this match lasted longer than a couple of hours. Indeed the biggest worry for England came before a ball was bowled as Morgan confirmed Mark Wood was missing through discomfort in his left ankle after the final warm-up match against New Zealand. An injection was administered and the management hope he will be available for the selection for Bangladesh on Wednesday.

The extra pace was to be provided by Tymal Mills, playing in his first T20 for England in four years. Nevertheless, on a slow-ish pitch at the Dubai International Stadium, the sharper stuff was always going to be the support act to spin.

While Rashid took the spoils, Moeen Ali set the tone, opening the West Indies innings and delivering his four overs straight. His two for 17 – career-best in the international format – accounted for Lendl Simmons and Shimron Hetmyer, and also took s smart catch running back from mid off to account for Evin Lewis, for Chris Woakes’ one dismissal.

When Mills got Chris Gayle spooning to Dawid Malan at midwicket – another well-judged grab while back-pedalling – West Indies were 31 for four in the Power Play. Not terminal, by any stretch. Indeed the biggest capitulation was still to come.

Another team might have knocked the ball around, managing what remained to at least make it to 20 overs for a reasonable score, if not to keep their dignity intact. But that’s not the West Indies way, and there was mitigation for trying to play to type with Nicolas Pooran, Kieron Pollard and Andre Russell still in the mix. But when that trio were hounded out for just seven runs between them, embarrassment was confirmed.

Russell’s dismissal was Rashid’s first delivery, and unquestionably the best of the lot: a picture-perfect slider, skidding through the right-hander’s gate and lighting up middle stump. Pollard then heaved Rashid’s first of his second over down the throat of long on, as Jonny Bairstow collected his second catch after a sharp low one at point to dismiss Dwayne Bravo off Chris Jordan.

Rashid then found himself on a hat trick after Obed McCoy chipped his first delivery down the ground to Jason Roy. Ravi Rampaul survived, before tucking a single into the leg side to take West Indies to 50 (for nine), to ironic cheers from the stands. The number 11 eventually would eventually become the last domino to fall, bowled going for an ugly hack across the line.

Truth be told, the result could have been more emphatic. England rightly decided to dust the target of 56 off as quick as possible to boost their Net Run Rate ahead of any potential tiebreaker at the end of the Super 12 Group Stage. Alas, they encountered similar issues to West Indies, only making it to 39 for the three after six overs with Jason Roy, Jonny Bairstow and Moeen Ali (run out by a dud call from Buttler) seen off.

Akeal Hosein’s left-arm spin saw him emerge as the only player in maroon with credit with figures of two for 24 from his four overs. Both were caught-and-bowled, though the simplicity of the first (to remove Bairstow) was blown out of the water by a stunning dive to his left to remove Liam Livingstone for just one. The television umpires spent time deliberating over whether he used the ground to retain the ball upon landing. Eventually, they decided it was legitimate.

Morgan returned to the middle, finishing unbeaten on seven from as many balls as Buttler swished a four behind square leg to see England home with 24 not out. However scatty it was, a tough opening fixture has been ticked off with aplomb.

Beyond the residual effects of the manner of this defeat, it is certainly not terminal for the West Indies. There are four more games to come, the next in three days time against South Africa who also lost their first match on Saturday against Australia, albeit in a much closer affair with defeat coming with two balls to spare.