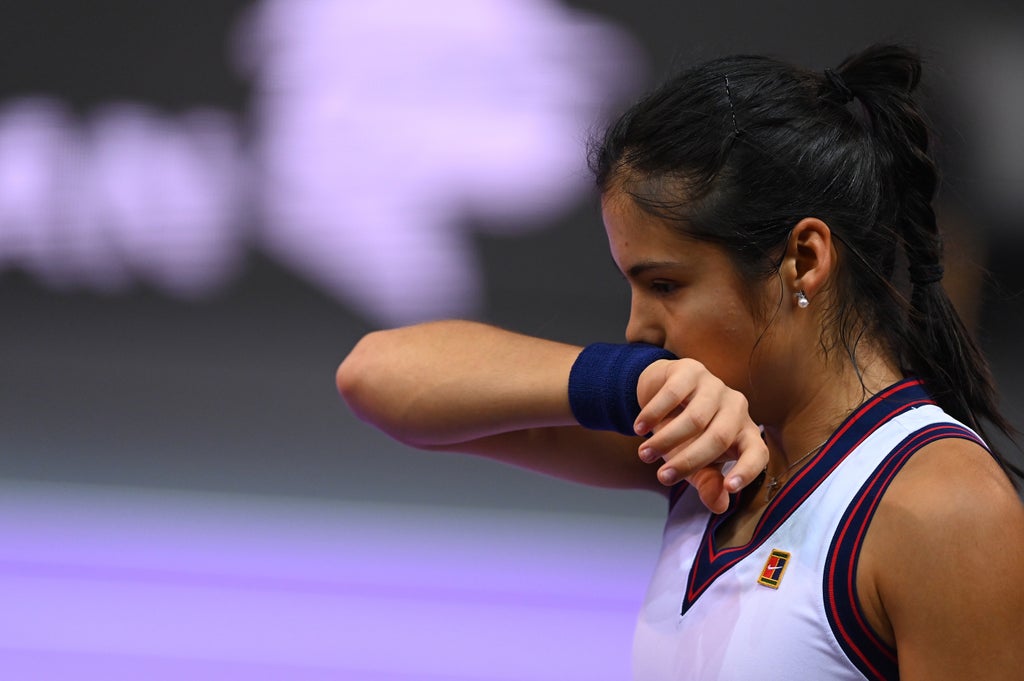 A tired Emma Raducanu has vowed to ‘brush off’ her comprehensive defeat to Marta Kostyuk in the quarter-finals of the Transylvania Open.

US Open champion Raducanu, who had won her first two matches on the WTA Tour to reach the last eight in Cluj was beaten 6-2 6-1 by Ukraine’s Kostyuk, the sixth seed.

Third seed Raducanu lost her opening service game from 40-15 up and was broken five times in total as Kostyuk powered into the semi-finals in just 57 minutes.

“It was a tough match for me,” Raducanu said. “I thought Marta did well to stay focused and she’s a great athlete so I knew it was going to be a tough match.

“I wasn’t physically feeling 100 per cent, I was quite tired and lethargic today but all credit to Marta. I knew from practice that I was tired, I just couldn’t get it going.

“It’s disappointing that you have these days, it’s not a nice feeling to have. I just need to move on from it and brush it off and then I’ll be back in another tournament soon.”

Asked whether this week’s exertions were to blame for her fatigue, Raducanu added: “I think it’s the last six months.

“It’s been a lot of learning and I have experienced a lot with no gaps. I’m just adapting to the fast-paced life of the tour and still very new to it. It’s still going to take me some time to adjust.”

Kostyuk, who will face top seed and home favourite Simona Halep in the last four, said in a courtside interview: “Honestly I don’t know how I won the first game.

“I was 15-40 down, she had advantage, she was serving, and I think that’s where everything started. I somehow won that game and I gained this confidence.

“I had this feeling that I’m not going to lose this match and then after that I figured out by the fifth game maybe how to play her today – I don’t know, maybe next time I play her it’s going to be a different tactic.

“But I figured it out and the tactic obviously helped me. I couldn’t read her because if her ball is in it’s really, really tough to do something. I was just trying to put as many balls back as I could.”

Raducanu made a total of 41 unforced errors and served seven double faults, two of them coming in what proved to be that crucial opening service game.

The 18-year-old did hold to love at her next attempt and created a break point in the sixth game, only for Kostyuk to save it with an ace and then break Raducanu again for a 5-2 lead.

After comfortably serving out the set, Kostyuk broke in the opening game of the second and there was no way back for Raducanu, who at least showed her fighting spirit to save three match points before Kostyuk sealed victory.

Raducanu plans to take a week off before contesting the Linz Open and then another week off to “reset and get mentally and physically fresh for a tough pre-season.”