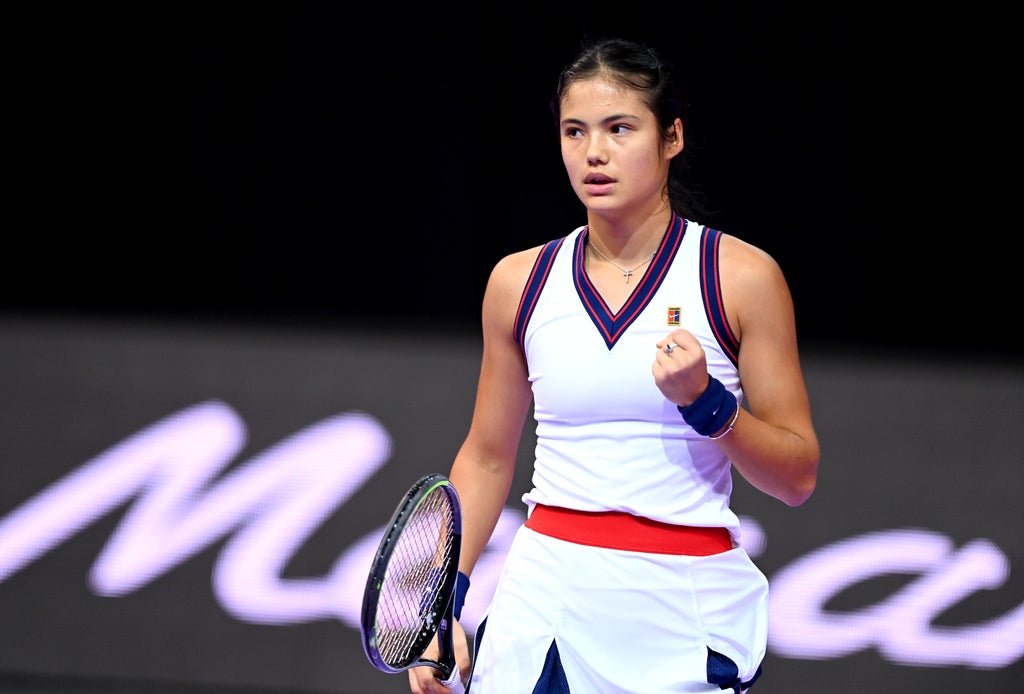 Emma Raducanu won for the first time since her stunning US Open success as she made it through the first round of the Transylvanian Open.

Raducanu, with her Romanian father in her box, is playing what must feel like a home tournament in Cluj even though it is behind closed doors, and she will have enjoyed herself after coming from behind to beat Polona Hercog 4-6 7-5 6-1.

It was just her second match since that astounding win in New York last month and she has finally been able to end the anomaly of being a grand slam champion without a win on the WTA Tour.

This is just her fourth tournament at this level and after three previous first-round defeats she is finally on the board.

The 18-year-old has enjoyed life off the court since her Flushing Meadows success, with a host of red-carpet appearances and profitable endorsements, but this victory will feel like a big step in the right direction.

Hercog may be ranked 124 in the world, but she has been around for more than 10 years and outlasted many up-and-coming stars.

After winning the first set and looking the stronger heading into the clutch end of the second set she would have been favourite to win.

But Raducanu, who had previously struggled to find anywhere near the level she showed in New York, showed grit to level up and then allowed her talent to come out on top in the third set to seal a memorable victory.

Given her ancestry, Raducanu was given more of a fanfare than home favourite Simona Halep ahead of the tournament and she lived up to her star billing in the opening exchanges, winning the first three games on her way to a 4-1 lead and looked on course to take the first set in comfortable fashion.

But a poor service game by the teenager saw the Czech break to love and the tide completely turned.

Hercog showed all of her nous and experience to quickly wrestle control, winning five games in a row to take the first set.

Raducanu looked all at sea during that spell, with her first serve abandoning her, with the unforced error count racking up but she did well to compose herself at the start of the second.

She had a chance to gain the initiative, but missed three break points at 2-1 as Hercog served her way out of danger.

As the match headed towards a decisive period, it looked like Hercog was going to come out on top as she forced a break point at 5-5, which would have left her serving for the match.

But Raducanu showed some steel and saw off the peril and then struck herself in the following game, eventually taking the break – and the second set – at the fourth time of asking as Hercog went long with a forehand.

That proved a crucial moment as she then put her foot to the pedal and showed some of the shot-making that catapulted her to glory at the US Open.

She sealed a maiden victory with an ace to send her into the second round.