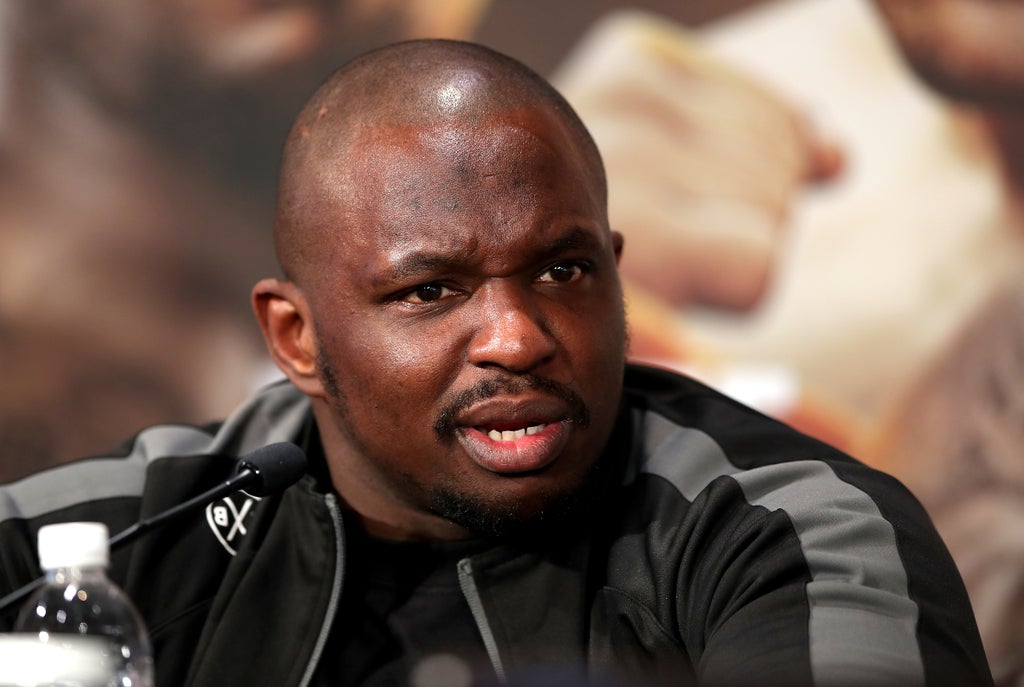 Dillian Whyte claims he was left “depressed” after a shoulder injury forced him out of a fight against Otto Wallin this weekend but there are no plans to rearrange the encounter. Instead the Brixton heavyweight has set his sights firmly on facing a man he perceives as an all-time great in Tyson Fury.

Addressing the media in a side room at an upmarket hotel in London’s Docklands, Whyte looked much the same as he has at this point of many fight weeks over the past few years. “I’m only a few pounds over my fight weight,” he says. “I trained hard for Wallin.” But he will be throwing no punches at the Swede inside the O2 Arena on Saturday due to the shoulder damage sustained during camp, which means he will now not fight again during 2021.

Cynics suggested that Whyte’s withdrawal was a business decision, that a fight with Wallin was deemed too risky with a mega-money clash against WBC champion Tyson Fury now all but officially mandated by that particular sanctioning body. Whyte is currently the WBC “interim” champion and is in line to face Fury early next year, with the victor then set to meet whoever wins Anthony Joshua’s rematch with WBA, WBO and IBF king Oleksandr Usyk. But had Wallin left London as interim champion, Whyte’s plans would have gone up in smoke. The self-styled “Bodysnatcher”, however, completely refutes claims that he is not actually injured.

“A lot of people are talking nonsense about this and that but I don’t pull out of fights,” he adds. “I’m very annoyed, frustrated and depressed about the Wallin fight but these things happen. I can only control what I can control. I was training well and feeling good and I believe I would have knocked him out in the first six rounds.”

Whether or not Whyte and Wallin’s paths will ever cross remains to be seen, but what this cancellation does mean is that the former can now focus entirely on a potential encounter with Fury.

Whyte’s promoter Eddie Hearn has already suggested that the pair could meet at Wembley in “late March-early April” with talks regarding a deal expected to really gather pace when the WBC makes its decision on the mandatory situation at its convention this month.

“Tyson Fury is a major fight and one that I’ve wanted for a long time,” Whyte adds. “What fight would you rather see me in: Tyson Fury or Otto Wallin? Be honest. It’s a simple choice.

“Fury needs to come back to the UK, we’ve been mandated to fight and me and him have had a lot of backward and forward. We were meant to fight twice before and it didn’t happen. But with Tyson Fury you never know. I hope he will fight me because he says he’s a fighting man and a man of his word so I would hope so. We’ve been mandated to fight and I would hope that he sees sense that it’s a big fight, a major fight for heavyweight boxing.

“It makes sense and he’s said many times that when he beats Wilder he will fight me. I think this time he will fight so let’s see. I’ve earned the fight, it’s not voluntary, I worked hard and challenged. I’ve fought more top 10 guys than most champions have. It’s about time now.”

One thing that Whyte will not allow is any boxing politics to stand in the way of a shot at Fury’s WBC belt. The Gypsy King is promoted by Frank Warren in the UK and Bob Arum in the US, with his fights shown on BT Sport here and ESPN across the pond. And Whyte is confident that his status as a free agent will help secure a deal. Although he works closely with Hearn, Whyte is not currently contracted to Matchroom – which is currently aligned to DAZN – and is there nothing to stop him fighting on any network on home soil or abroad.

“I don’t care who promotes it,” Whyte says. “What is most important to me is the fight; the belt is great and I want it but it’s about the fight. I have an opportunity to fight the greatest of all time as everybody is saying. This would be my opportunity to be the man who beat the man.

“We will go wherever the highest bid is. Let’s see who that is. I’m a free agent so I can go where I want but I work closely with Matchroom out of loyalty over the years and we do good business together. Now Matchroom are with DAZN but we have to go wherever makes sense for us. Eddie is on board with that.

“I want to be in the biggest fight possible and I won’t let a network stop me from doing that. When my career is finished I want to know I fought who I wanted to fight and fought all the best people. A lot of fights don’t get made because of networks and everything else and that’s why we’ve always been like this. It has been hard work but we put a lot of years, time and effort into it.”

It is then suggested to Whyte that after many years pursuing a world title shot with the WBC, that this clash with Fury is “now or never”. But, 30 fights into his professional career, Whyte does not believe the stakes are that high yet.

“I’m only 33 and I’m still improving,” Whyte adds. “Every camp, my numbers are improving, my boxing is better, I’m getting leaner and stronger. You can’t say that in the last five years I’ve plateaued. I’m a very honest person and I ask myself these questions all the time. I wake up and think: ‘f***, I’ve got to go to the gym again.’

“The opportunity to fight and beat someone who people are saying is the greatest of all time, from where I’ve come from, what I’ve done and who I was, that’s major. I never planned to be great at sport or champion of the world. So for me this is all good.”