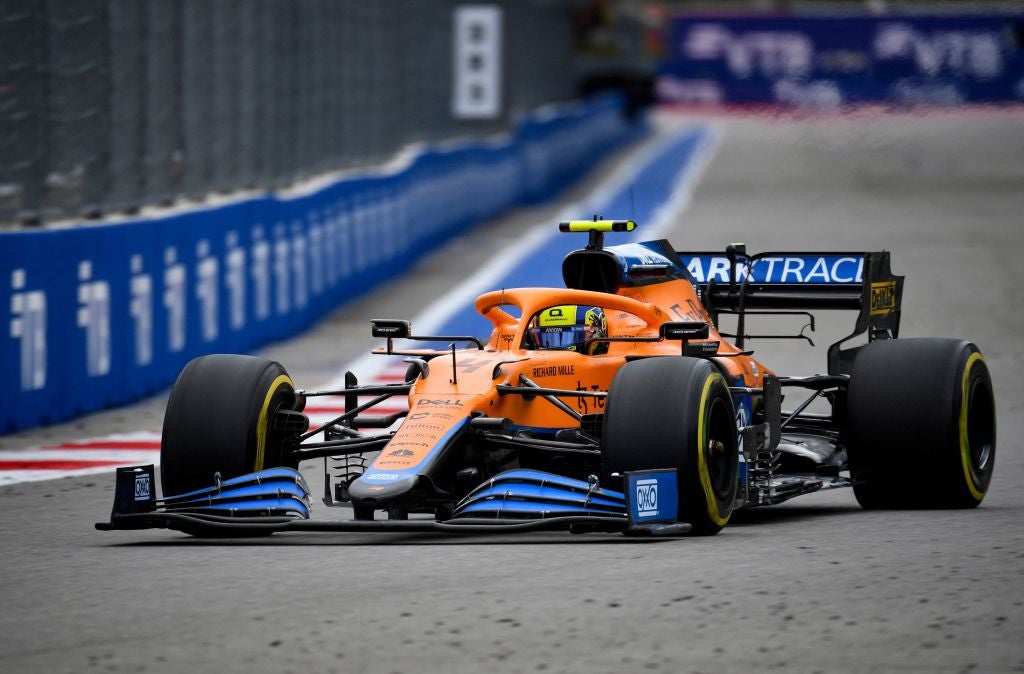 Lando Norris was left in tears after late rain at the Russian Grand Prix cost him his first ever Formula 1 victory.

The 21-year-old started on pole position for the first time and, after briefly losing the lead to former team-mate Carlos Sainz, dominated the race and defended well from Lewis Hamilton in faster machinery.

But with five laps to go heavy rain started to fall and while every other driver, including Hamilton, pitted for intermediate tyres, Norris opted to stay out on track and attempt to the nurse the car over the finish line.

He tiptoed around the track while Hamilton hunted him down, ultimately spinning with two laps to go and allowing the Mercedes car to waltz to victory unopposed.

The McLaren driver drove a superb race up until that point and nobody could begrudge a brave strategy call in search of the win, but the final result left Norris heartbroken.

“I don’t know where to start”, he told Sky Sports. “I’m unhappy, devastated in a way. We made a call to stay out and we stand by that. It was the wrong one at the end of the day but I made the decision just as much as the team. It was more that they thought I should box and I decided to stay out. It was my decision, I thought it was the way to go.”

Alpine’s Fernando Alonso praised the young driver’s performance and bravery in his post-race interview, saying it won’t be long before Norris stands on the top step of the podium.

Asked about his chances of winning again in future, Norris said: “I don’t think it changes too much. I had the confidence beforehand that I was capable of doing it [leading a race] and I’ve felt capable of doing that for a while. So I don’t think that’s really changed. It’s just a bit of heartbreak.”

The decision to stay out rather than pit is an error Norris believes he and his McLaren team can learn from future.

“When it’s only two laps to go, when there are 20 to go you’re maybe not as aggressive with decisions. We did what we thought was right, which I’m happy with. It was wrong at the end of the day but everything until then the guys did an excellent job. I’m happy with everything apart from that one decision which we’ll review and try not to make again.”