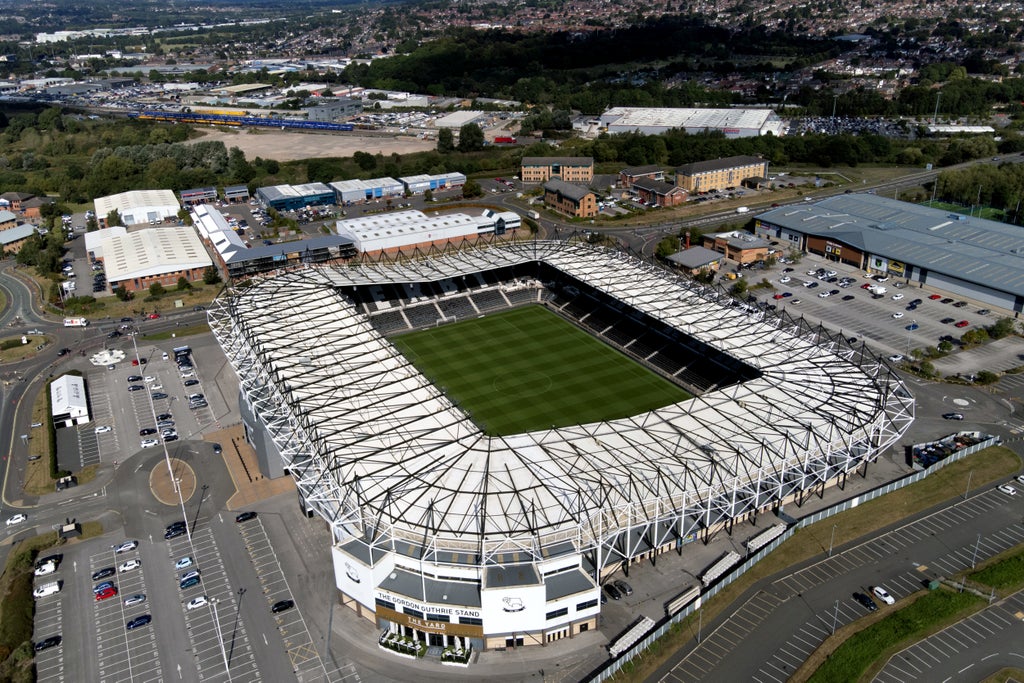 Administrators have put Derby’s chances of survival at 95 per cent and are already aware of six parties interested in purchasing the Championship club.

The Rams confirmed the appointment of Andrew Hosking, Carl Jackson and Andrew Andronikou from Quantuma as joint administrators on Wednesday, which triggered an automatic 12-point deduction from the EFL

Hosking and Jackson faced the media on Thursday and while both warned of a difficult road ahead, Hosking gave a very optimistic assessment of the club’s future.

“My view is that there is going to be a 95 per cent probability this will be resolved and resolved certainly in the coming months. I do not consider at all that this could be a liquidation scenario,” he said.

They confirmed that two “substantial entities” who had been interested prior to administration and walked away had now re-engaged advisors, in addition to four others who had already expressed an interest.

They hope to complete a sale by the end of the year to enable the new owners to make their own decisions regarding the January transfer window.

The club face the prospect of a further points deduction from the EFL over breaches of financial regulations under former owner Mel Morris.

Administrators said there had been “positive dialogue” with the EFL, and its chief executive Trevor Birch said: “It will be in the administrators’ interest for it to be resolved quickly. Any purchaser is going to want to have certainty as to what they’re buying.”

The administrators said there was “no consideration” being given to dispensing with manager Wayne Rooney in order to cut costs. He met them face to face on Thursday and Jackson described him as “very impressive”.

Hosking added: “He requested to sit in on Supporters’ Trust meeting to stress to them how committed he is to the club and working together to get a solution.

“That was his choice and obviously that gives you an indication of the man and his desire to move this forward and have a resolution as quickly as possible.”

Rooney criticised outgoing owner Morris in his own press conference on Thursday for how he handled a conversation with the playing staff when administration became likely, saying: “In my opinion, it wasn’t sincere enough, it wasn’t heartfelt enough, and it wasn’t done with enough honesty.

“He’s put a lot of money into the club, and he deserves a lot of respect for that, but there are ways of handling things and it has left me disappointed.”

Birch said Derby’s demise was an example of the flaws in the benefactor model of ownership “which works until it doesn’t”.

“There is that inevitability when a benefactor does turn off the tap, then this is what happens because there is an unsustainable trading model. Inevitably there will be others along the line,” he said.

Both Birch and the administrators agreed that the disparity between the money on offer in the Premier League compared to the Championship led clubs like Derby to gamble.

Birch said the EFL was in ongoing dialogue with the Premier League over how money is distributed, but accepted that if they could not come to an agreement, then politicians may have to step in.

Tracey Crouch is finalising her fan-led review of football governance, and Birch said: “Ultimately to achieve a sustainable pyramid we do need to have a fairer distribution of the wealth within the game.