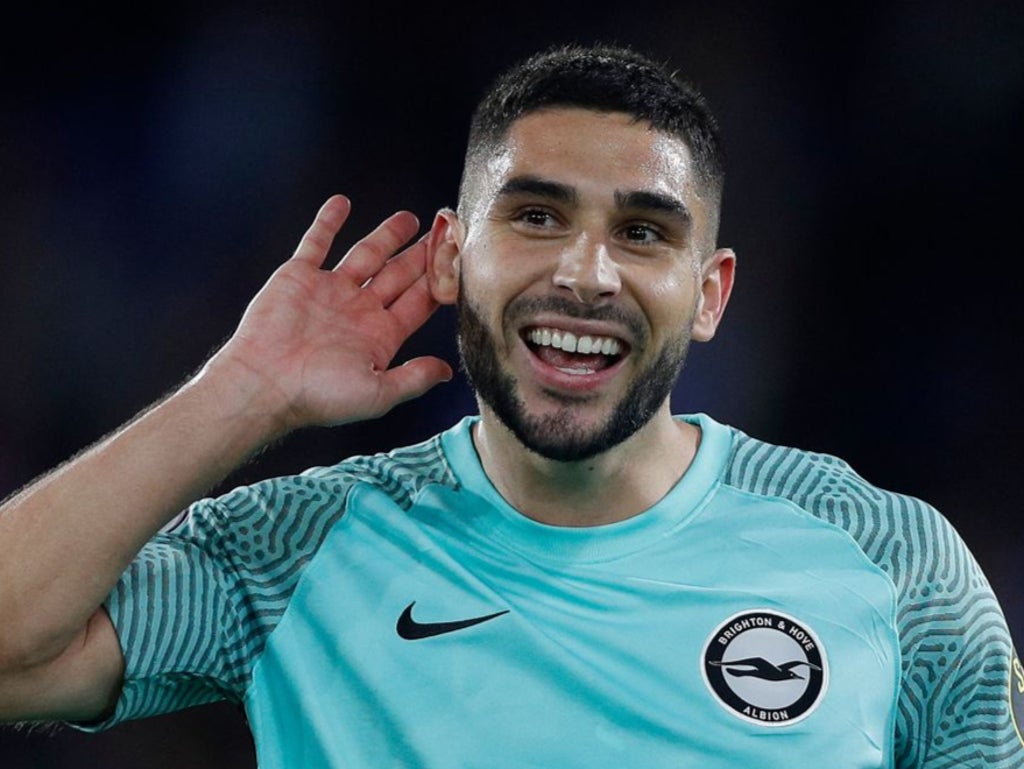 If you had to pick two players to score in this fixture between Crystal Palace and Brighton, you would have probably guessed right. After Wilfried Zaha had given Palace the lead in his 400th appearance for the club with a penalty two minutes into first-half stoppage time, Neal Maupay, a man who thrives on inflicting pain on opposing fans, went deeper in the second half, equalising in what was officially the 95th minute of the match.

Perhaps 1-1 was unfair on the hosts, who seemed to have the best of what was on offer for most of this match. They turned first-half domination into a half-time lead when Connor Gallagher’s slick movement saw him ghost inside and draw a misguided attempt from Leandro Trossard to shield the ball. Referee Andrew Marriner didn’t need a second look before awarding the penalty and Zaha required no second invitation to step up and sweep the ball into the bottom left corner, as Brighton goalkeeper Robert Sanchez went right.

With the inevitability of Zaha and Brighton reconfirmed with an eighth goal against them in all competitions, and a fifth in the last five at Selhurst Park, a second win of the season looked on the cards. But just as predictable as Palace’s goalscorer was that of the visitors’ saviour. Maupay, a rival for Jamie Vardy’s crown as the Premier League’s chief rattler, ran onto Joël Veltman’s hopeful volley upfield from Vincente Guatia’s free kick, lifted expertly over the keeper and proceeded to taunt every side of the ground. This was the Frenchman’s fourth of the season and perhaps already his most meaningful.

It resulted in an ill-tempered conclusion which only got hotter as the final whistle went. Both teams squared up, James McArthur and Sanchez receiving cautions for their angst, while disgruntled Palace fans offered out Brighton’s players on their way back to their changing room.

The white-hot finish belied what had been a relatively calm encounter. These are the sorts of matches that either reinforce a narrative or destroy it altogether. And for all but the final couple of minutes, this was more a battle of wits than fists.

The more prescient of the two tales coming into Monday was of Brighton’s start and how a fifth win in this sixth Premier League match would take them to the top. And though even the most belligerent Seagull would admit such a lofty position was somewhat artificial given we are still on in September, there was a clear authenticity to what Graham Potter has been creating by the sea.

An evening trip to Selhurst Park was a good a way as any to test Brighton’s robustness. Long before the home crowd had ramped the atmosphere up, the visitors had the first issue to contend with when confirmation arrived that Yves Bissouma was out of the fixture with a knee injury.

Meanwhile, Patrick Vieira had handed over a Benteke-less team sheet. The extra mobility and goal threat of Odsonne Edouard preferred to the Belgian’s, well, noble but not very “get in their faces” approach. The kind that gets the fans going on nights like these.

The first half was actually relatively tame. Because the other thing that these nights rely on is plenty of back and forth. And for the opening period, Palace were doing the bidding.

They shifted the ball about quickly yet diligently, giving Brighton’s midfield more work out of possession than they have been used to this season. Pressure up high also elicited a few mistakes, but with chances few and far between, the noise seemed to plateau at a certain level along with the sense of jeopardy.

Indeed Brighton had the best of the early chances. A long ball from Sanchez bypassed 10 Palace players to put Danny Welbeck one-on-one with Vincente Guaita. Pressure from a retreating Joel Ward ensured the attempted dink did not trouble the goalkeeper.

Palace’s 1-0 lead into the break was deserved and arrived via a familiar driving source albeit from an unfamiliar position. Zaha had been the most prominent driver from the left with the ball at his feet. But when Gallagher found himself on the right, he decided to take a page out of the Ivorian’s book, bumping off Marc Cucurella before Trossard stepped across him illegally.

Potter made an immediate change at the break, bringing on Steven Alzate for Dan Burn. He would only last 20 minutes after damaging his left ankle, but his replacement, midfielder Jakub Moder, put Brighton into a 4-3-3 that allowed them an extra body in the middle and greater presence in Palace territory.

Up until then, a regulation tip over the bar from Guaita to a Lewis Dunk header and a few blocks from Gallagher were the only threats mustered. Palace, keener to hold what they gad as full time drew nearer, should have doubled their leads.

On 52 minutes, they were gifted a three-on-one opportunity after an awry back pass from Sanchez. Edouard however was seemingly the only man in south London who did not realise Zaha was five yards offside from the initial press, playing an immediate through pass when he should have dribbled on, with more attacking support on its way.

A much easier chance came with 13 minutes to go. Gallagher, again, injecting energy into a move with a neat interception on the halfway line. Though he was taken out by Cucurella, Christian Benteke – on for Edouard – continued the move to play Jordan Ayew through on the right. Ayew’s side-foot finish was composed, but lacked accuracy, nestling on the wrong side of the netting at the near post. There were options to square inside, too.

Of course, they would come to rue those misses, even though they remained energetic and regimented in their quest to keep this clean sheet. Had Guatia’s kick been better (or worse), had Veltman’s volley not been perfect, Palace take a deserved three points. Alas, both were as they were, likewise Maupay’s composure to maintain Brighton’s impressive start in sixth and temper Palace’s progress, who drop to 15th.