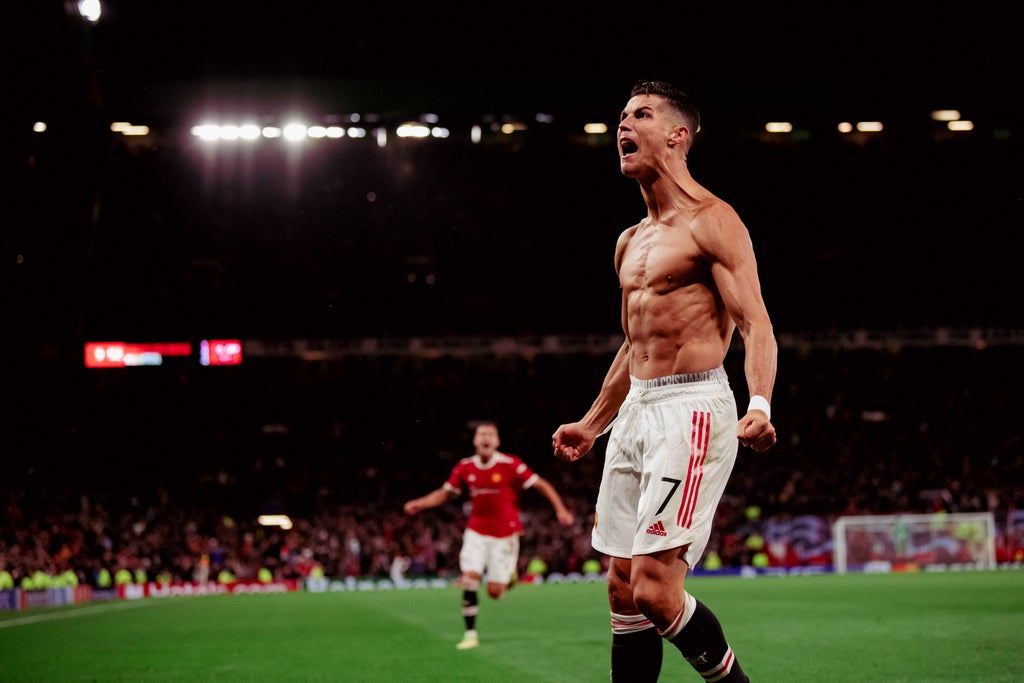 There are questions, perhaps, about whether Cristiano Ronaldo improves Manchester United on the whole, whether it was a necessary signing or what this perplexing team really requires, but the first Champions League crowd at Old Trafford in two-and-half years was not asking them last night.

Instead, they were only chanting “Viva Ronaldo”, long after a stoppage-time winner to salvage a less than perfect performance and make United’s prospects of progressing from Group F suddenly look much rosier. This is why he came back and why did everything to bring him home.

Three defeats in four made three points imperative but perhaps we should have known the script all along. Ole Gunnar Solskjaer has developed a knack of extracting himself out of these ruts as soon as he falls into them. When he needs a result, the United manager tends to get one. For an hour of this rematch with Villarreal, that looked remote.

Paco Alcacer gave United’s conquerors in last season’s Europa League final a deserved lead at the start of the second half, as a makeshift United defence and new system faltered badly. Yet with Alex Telles’ bolt from the blue to equalise, United rallied to a remarkable climax and the first great European moment of Ronaldo’s second coming.

In the fifth minute of five added-on, it was the Portuguese’s finish from Jesse Lingard’s cute lay-off with bounced off goalkeeper Geronimo Rulli’s gloves, into the ground then rose high into the net in front of the Stretford End. That late intervention was Ronaldo’s only major contribution of the night but it was a winning one.

It was a moment so big it might even paper over the considerable cracks. United, it has to be said, got away with one. Given the importance of taking three points, and with three quarters of Solskjaer’s preferred back four unavailable, now was probably not the time to trial a new system. He did anyway, making four changes from Saturday’s defeat to Aston Villa, with Jadon Sancho coming in for Fred and Paul Pogba dropping into midfield.

From there, Pogba took up more advanced positions than usual, leaving Scott McTominay to often patrol acres of space alone. The only assistance came from Diogo Dalot, whose runs infield left room down United’s right. After an initially aggressive start on the front foot by Solskjaer’s side, Villarreal took note of the gaps that United’s new system was leaving and duly exploited them.

When David de Gea is doing something right, United are usually doing something wrong and so it was in a first half that the visitors dominated. Arnaut Danjuma terrorised Dalot on the rare occasions when United’s stand-in right back was in the correct position to pick up the former Bournemouth winger’s runs. A better finish by Danjuma on one such move would have beaten De Gea after just six minutes.

Danjuma’s second attempt was better, and destined for the far corner after another dance around the bewildered Dalot, but still not good enough to defeat De Gea’s reflexes. The United goalkeeper, rejuvenated since winning his starting place back over the summer, had to be alert once more when Danjuma’s cross was headed goalwards by Alcacer. Only 17 minutes had passed and, with an inferior goalkeeper, United would have been three down.

There was an audible groan around Old Trafford after Danjuma burst clear down United’s right once more and shot into the side netting on the half hour mark but, by that point, you could only sympathise with poor Dalot. His task – to fill the gaps in midfield while still covering the right flank – was near impossible and not helped by his team-mates.

Solskjaer came down to his technical area at one stage and gestured to the rest of United’s defence, reminding them to come across and fill the width of the pitch as a back three when Dalot advanced forward. Even Raphael Varane was struggling, mistiming an interception which allowed Alcacer through one-on-one. With De Gea’s stock still and feet planted into the ground, he somehow sent his shot wide.

United’s only real threatening moment on the Villarreal goal in that half was a stray Alberto Moreno backpass that beat his own goalkeeper but trickled past the wrong side of the post. Solskjaer has seen his players perform worse than that first half, but rarely have United looked so uncertain of what they were supposed to be doing. At least Villarreal had not punished them, but even after the break, they failed to heed their warnings.

Predictably, Alacacer’s goal came from down United’s right with Danjuma beating Dalot once more, yet the chance only came about through an uncharacteristically manic dart upfield by Varane to close down Dani Parejo. One pass through Pogba and McTominay’s limp attempt at midfield protection sent Villarreal through. De Gea could not stop Alcacer on this occasion, the scuffed finish bouncing through his legs.

It was no less than Villarreal deserved, which was more than could be said for United’s equaliser. In fairness to Telles, it was spectacular – a crisp volley that dipped and bounced to deceive Geronimo Rulli, who appeared to see the ball late. It came from a Bruno Fernandes free kick, intelligently lofted to the edge of the box rather than chucked into the mixer. United’s appointment of a set-piece coach is perhaps paying dividends.

And from there onwards, the pattern of the game was turned on its head. United improved while Emery’s visitors retreated further and further, vacating the spaces they had once dominated. Edinson Cavani was introduced for the muted Sancho and spurned an excellent chance at taking the lead, nodding wide when free at the far post.

Villarreal had a better one themselves after De Gea could only parry Moi Gomez’s shot, though Boulaye Diaz could not poke in. A late winner was to come, though, and it was only ever going to be from one man.