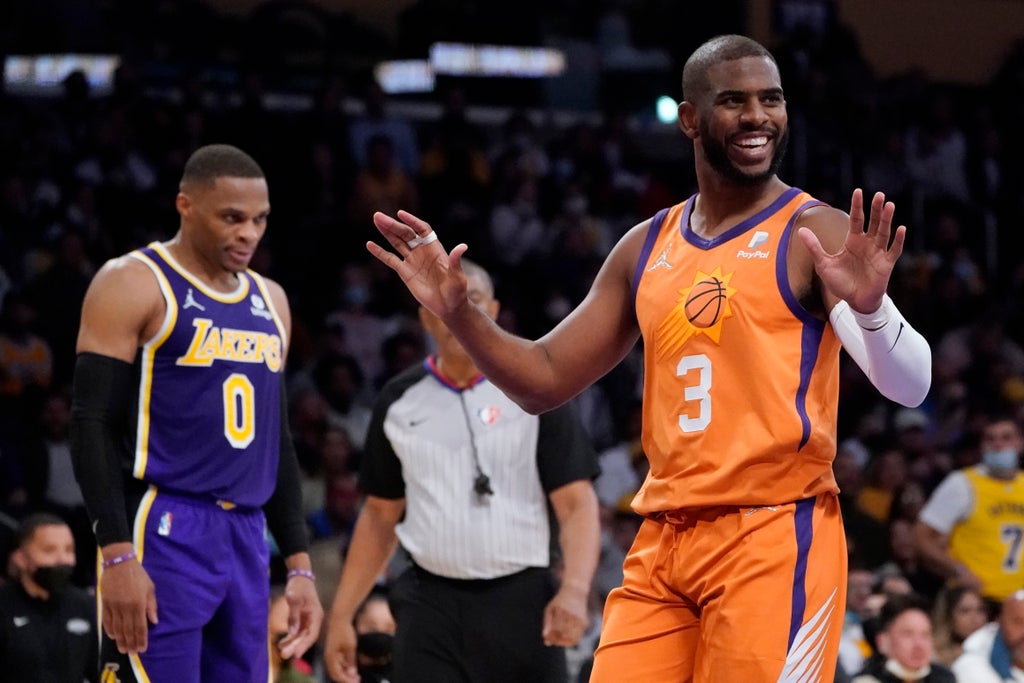 Point guard Chris Paul achieved the career milestone of scoring 20,000 points as his Phoenix Suns humbled the Los Angeles Lakers 115-105 on a dramatic night in California.

Paul finished with 23 points and 14 assists – the 36-year-old also became the first player in the league’s history to record 20,000 points and 10,000 assists – while Devin Booker poured in 14 for the defending Western Conference champions.

The winless Lakers struggled to build pressure as tension erupted off the court during a timeout between team-mates Anthony Davis and Dwight Howard, with Rajon Rondo also getting into a confrontation with a heckling fan.

The Charlotte Hornets won 123-112 against the Cleveland Cavaliers, the Washington Wizards squeaked home 135-134 in overtime against the Indiana Pacers and the New York Knicks netted 24 three-pointers as they blew away the Orlando Magic 121-96.

The Knicks’ crosstown rivals the Brooklyn Nets closed out the Philadelphia 76ers 114-109 off the back of Kevin Durant’s 29 points and another 20 from James Harden.

The Boston Celtics had their home opener spoilt 115-83 by the Toronto Raptors, while centre Christian Wood gave fans in Texas something to cheer about as he went 13 for 19 from the field to help the Houston Rockets to an easy 124-91 victory over the Oklahoma City Thunder.

Reigning MVP Nikola Jokic posted 32 points as his Denver Nuggets defeated the San Antonio Spurs 102-96, the Chicago Bulls dominated the New Orleans Pelicans 128-112 and the Sacramento Kings suffered their first loss of the season as they fell 110-101 to the Utah Jazz.