WALNUT CREEK, Calif. — Gonzaga’s Chet Holmgren was not shy when asked about the obvious stereotypes that come with being a basketball star who looks like him.

“I was a white kid with a bowl cut,” the 7-foot-1 power forward told Andscape last month. “People were like, ‘This little white boy is trash.’ At the end of the day, I’m not going to worry about it. Everybody stereotypes in one way or another, whether it’s ethnicity or how you dress or what music you listen to, it doesn’t matter. Everybody’s going to have an opinion, everybody’s going to judge you. You can’t worry about it.”

His self-assurance and swagger are undoubtedly built on his basketball skills — the 19-year-old true freshman is averaging 14.2 points, 9.6 rebounds and 3.6 blocks per game heading into Thursday’s first-round NCAA tournament game against Georgia State in Portland, Oregon.

But it’s also rooted in his personal upbringing, growing up in South Minneapolis in a diverse neighborhood.

“It is just great to be able to be exposed to different things because at the end of the day, if you haven’t seen something you don’t really know about it,” Holmgren said. “That is why people can have misconceptions about one person to the other. That is why I feel I’ve been blessed to not only have been around a lot of Black culture, but other cultures in general.”

Holmgren — whom ESPN’s Jonathan Givony and Mike Schmitz listed this week as the top prospect in the 2022 NBA draft — grew up playing basketball under the tutelage of his father, former University of Minnesota center Dave Holmgren. The neighborhood Chet Holmgren grew up in included families that were African American, Hispanic and Somalian. 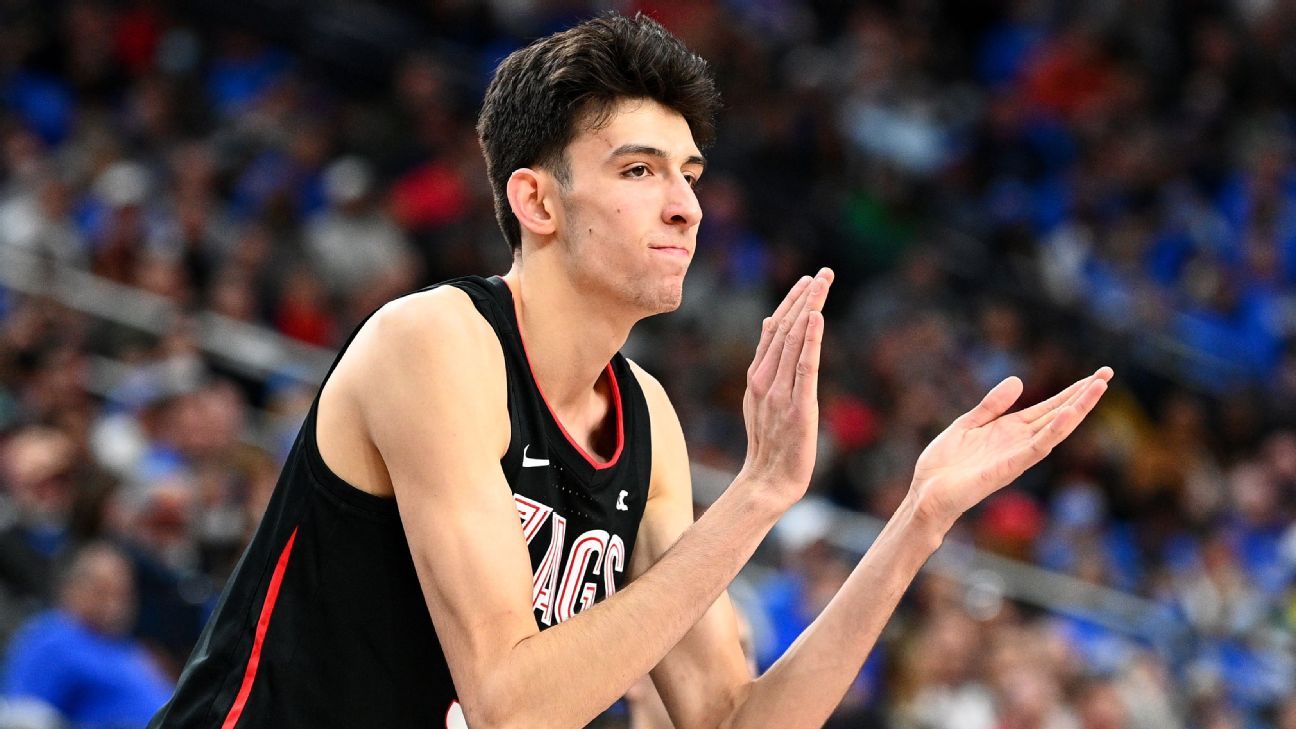 “I learned about different types of foods to different types of music and clothes,” Holmgren said. “I was around it and it grew on me. Now, I see it as that’s my style. That’s my type of music that I listen to. That’s the food I like. That is something that I enjoy in life.”

He added, smiling as he reminisced: “I love all types of foods. … The soul food that I like is greens, cornbread, brisket, ribs. You can go down the list, I love it all. Macaroni and cheese. There’s a Jamaican place that’s two blocks from my house. And they have some of the best jerk chicken in the world and plantains. It’s just great to be able to be exposed to different things.”

Holmgren also loves hip-hop, Midwestern rappers in particular, and its culture and fashion as well. He has quoted rappers such as Lil Baby on Instagram and many of his posts read by 342,000 followers have hip-hop playing. Gonzaga teammate Julian Strawther says that while Holmgren is focused on the court, he has “swagger” and exudes confidence off of it.

“He’s a character for sure. Really different,” Strawther told Andscape. “But I love being around him. He’s a jokester, messing around having fun. When it comes down to business, he’s a businessman at the same time. … He’s not what you expect him to be when you look at him. Probably the complete opposite.

“When I first met him, I was shocked at his personality. I love him to death. … He’s a tall, skinny, 7-1 dude who you expect to be quiet and timid. But he’s the most confident dude in the room no matter where he is.”

“He’s not what you expect him to be when you look at him. Probably the complete opposite.”

Holmgren was a junior in high school when George Floyd was murdered by Minneapolis police officer Derek Chauvin on May 25, 2020, which sparked days of unrest in Minneapolis and neighboring St. Paul and mass protests around the world over the treatment of Black people by police.

Five days after Floyd’s murder, Holmgren posted a picture of a Floyd memorial near the site of his death with the words: “Trayvon Martin, Tamir Rice, Philando Castile, Terence Crutcher, Walter Scott, Sandra Bland, Breonna Taylor, Eric Garner, Ahmaud Arbery, George Floyd. Sadly I could go on and sadly there has been no change. Now is the time for change.” Holmgren posted an all-black photo in solidarity of people of color on June 2, 2020. He also posted a picture of himself at a Floyd protest on June 19, 2020.

“It was hard to watch and hard to see things like that happen to your city,” Holmgren told Andscape. “I was going to do what I could to help make sure that it didn’t happen. I’ve been to the memorial. I drive past it any time I’m going from one place to another. It’s definitely hard to see. Hard to look at. But I’m glad there is a memorial there instead of it just being pushed off and forgotten about.”

Gonzaga has established a solid NBA pipeline during its long, recent run of success, but Holmgren is probably the school’s most heralded prospect since Adam Morrison was drafted third overall in 2006 by the then-Charlotte Bobcats.

“We’ve had great players, but nothing to the level of recruitment-wise and the uniqueness that Chet has,” Morrison, now Gonzaga men’s basketball’s radio color analyst, told Andscape. “Traveling around, everybody kind of wants a look at him and a piece of him. A lot of it is just how tall he is. That sounds funny. But he’s a massive human. And once you mix that with his skill set stuff, he’s an attraction.

“He’s done a fantastic job of handling that stuff. Kids nowadays are more prepared for the hype due to social media. He’s handled it well, has done a good job and he is grounded.”

Holmgren has a unique, deep shooting ability and a set of skills at 7-foot-1 that is rare, and he’s also a great shot-blocker and rebounder. The biggest concern is his 195-pound build at his height.

“He’s one of the most unique prospects as far back as I can remember,” one NBA scout told Andscape that recently watched Holmgren twice in person. “He’s an elite shot-blocker, rim protector and paint presence. He’s skilled as a passer, shooter and limited ball handler, not to mention he’s a legitimate lob threat. He’s a high-level defensive rebounder with the ability to dribble bust out and make simple plays in the open court. There [are] no real holes to his game. His only real weakness is lack of strength and girth.”

Morrison has been impressed with not only Holmgren’s talent at his size, but his humility to take tough coaching from Gonzaga head coach Mark Few despite his budding star status.

“The skill set and length is something you don’t see in college basketball, especially someone who can do it on the perimeter like he does,” Morrison said. “Everyone knows the rim protection stuff, but he is better than you think on [defensive] switches because we switch a lot, a lot of actions. He is able to stay in front of guards and use his length to his advantage.”

When asked about leaving for the NBA and being a potential No. 1 pick, Holmgren smiled and said, “I haven’t made a decision yet.”

With the arrival of the NCAA tournament, one of the brightest lights will be on Gonzaga, as the storied basketball school tries to win its first championship. Holmgren is expected to have a major role if the Bulldogs are able to make history.

And perhaps along the way, more and more basketball fans will get to know the story of a player who is much more than what meets the eye.