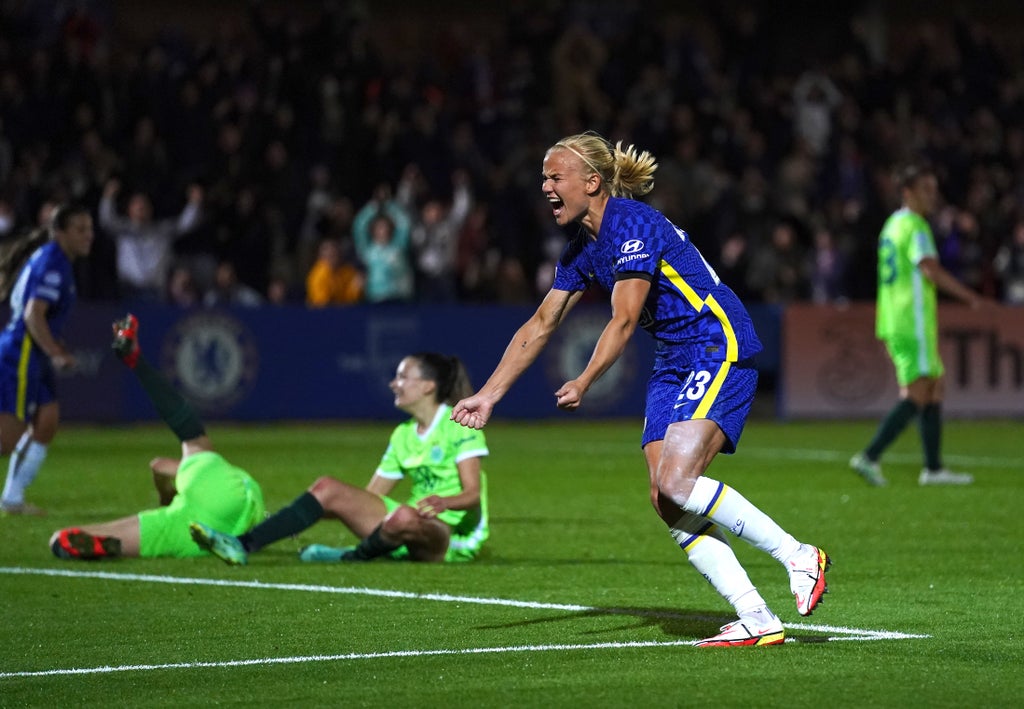 Chelsea’s former Wolfsburg striker Pernille Harder snatched an added-time equaliser against her old side after a catalogue of errors had threatened to derail their start to the Women’s Champions League.

Emma Hayes’ side looked like being architects of their own downfall as three defensive mistakes handed the advantage to the visitors only to rescue a 3-3 draw in the second minute of additional time.

It was far from the ideal opening to the Champions League group stage the Londoners wanted after their chastening 4-0 defeat to Barcelona in the final in May but their problems were all of their own making.

Having taken an early lead through Sam Kerr some indecision in defence gifted goals to Wolfsburg strikers Tabea Wassmuth and Jill Roord and then, to compound matters, another error shortly after half-time saw Wassmuth double her tally.

Bethany England’s smart volley gave Chelsea 39 minutes to salvage something but they left it late, although the draw leaves them two points behind Group A leaders Juventus.

The hosts, who left Fran Kirby on the bench after a cold, paid as much for not making the most of their early dominance as they did for their errors.

After Ji So-yun hit a free-kick over the wall to force Almuth Schult into a low save down by her post the hosts took the lead with an expertly executed goal.

Ji’s ball over the top picked out the run of Kerr and she showed the awareness and control which has made her the Women’s Super League’s leading scorer so far this season by lobbing the advancing goalkeeper with her first touch.

The traffic continued in one direction until a defensive calamity gifted Wolfsburg an opportunity to get back into the game and, unlike their opponents, they seized it.

A hopeful clearance out of defence caused confusion between Ann-Katrin Berger and her captain Magda Eriksson and hesitation by both saw neither deal with the ball, presenting Wassmuth with an open goal in which to roll her shot into.

More self-inflicted damage followed after 33 minutes due to another misjudgement by Berger.

The goalkeeper tried to play a short goal-kick to Melanie Leupolz running back towards the edge of her own area but under pressure from Lena Oberdorf she never collected possession and the ball fell to Roord who made no mistake in tucking a shot into the corner from 16 yards.

Chelsea manager Hayes’ half-time team-talk went out of the window just three minutes after the restart when yet another mistake led to a Wolfsburg goal.

Under pressure from Wassmuth, Jess Carter left a backpass woefully short but even then the Wolfsburg striker still had plenty to do.

However, she clinically beat Berger with a curling left-footed shot inside the far post from a narrow angle.

Chelsea quickly pulled one back through England’s smart volley after a goalmouth scramble at a corner but it was her last meaningful intervention as she was replaced by Kirby just past the hour.

It was not until the last 10 minutes the home side really turned up the pressure but after Erin Cuthbert fired their best chance wide Harder capitalised on a Wolfsburg error in the penalty area to fire home.