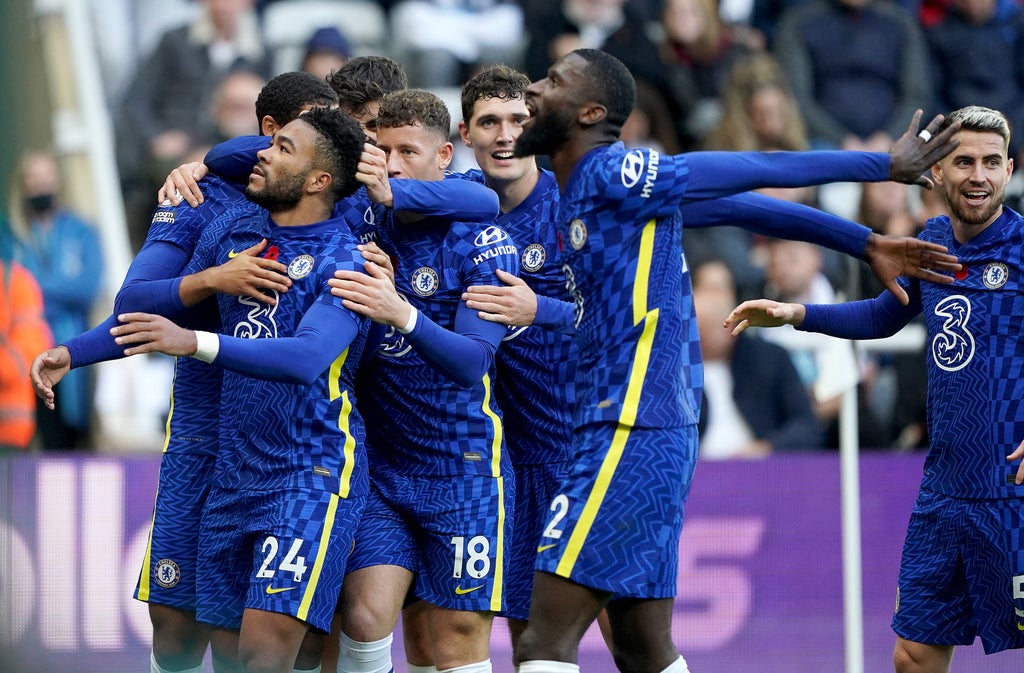 Reece James contributed with a pair of thumping finishes at St James’ Park before Jorginho’s late penalty sealed a fourth straight league win to lift Chelsea three points clear at the top of the table.

James and fellow wing-back Ben Chilwell have now scored seven league goals between them this season and Tuchel explained why they are both vital to his side’s offensive system.

Tuchel said: “Reece is allowed to come inside, that’s not a problem. It’s about all the spaces where we want to attack from.

“We have players in all the spaces where we want to be dangerous. So if there is a winger pinning wide, or waiting wide, the wing-back is absolutely allowed to attack the half-space.

“I think every team does this in this system. We need the wing-backs to arrive in our box to increase the chance of scoring and creating goal chances.”

Chelsea had to be patient as Newcastle turned in a dogged, disciplined defensive display for interim boss Graeme Jones before James and Chilwell helped unlock them in the 65th minute.

“The first goal, it was brilliant dribbling with Chilly (Chilwell) and Callum (Hudson-Odoi) on the left side,” Tuchel added.

“Ruben arrived, Kai (Havertz) was in the box, and this is what it takes in the end to have maybe a rebound or a second chance for a goal and Reece took it brilliantly.”

Jones, who took charge of his second match for his hometown club following the departure of Steve Bruce 11 days ago, is waiting to learn his fate.

The Magpies gave their all for Jones, who set up to stifle Tuchel’s European champions, but they have equalled their longest winless run at the beginning of a top-flight season of 10 games (1898 and 2018).

Jones said: “It’s not a style of football the fans are accustomed to. We want to attack people, we want to score goals, but this is the stage we’re in.

“We haven’t kept enough clean sheets this season and it doesn’t take a rocket scientist to work out what the need is at the minute.

“I think the priority is to stop conceding goals. That’s an absolute priority. I don’t worry about the other end of the pitch.”

Newcastle were penned inside their own half for most of the match and fans will be hoping the new owners can attract some significant signings in January to boost the club’s relegation fight.

Jones added: “We couldn’t release that first pass. Why? Because Chelsea are an outstanding counter-pressing team. But the mentality was there to try and do that, definitely.

“That doesn’t come overnight and maybe against lesser opposition we would have released that first pass and would have been a little bit more effective.”