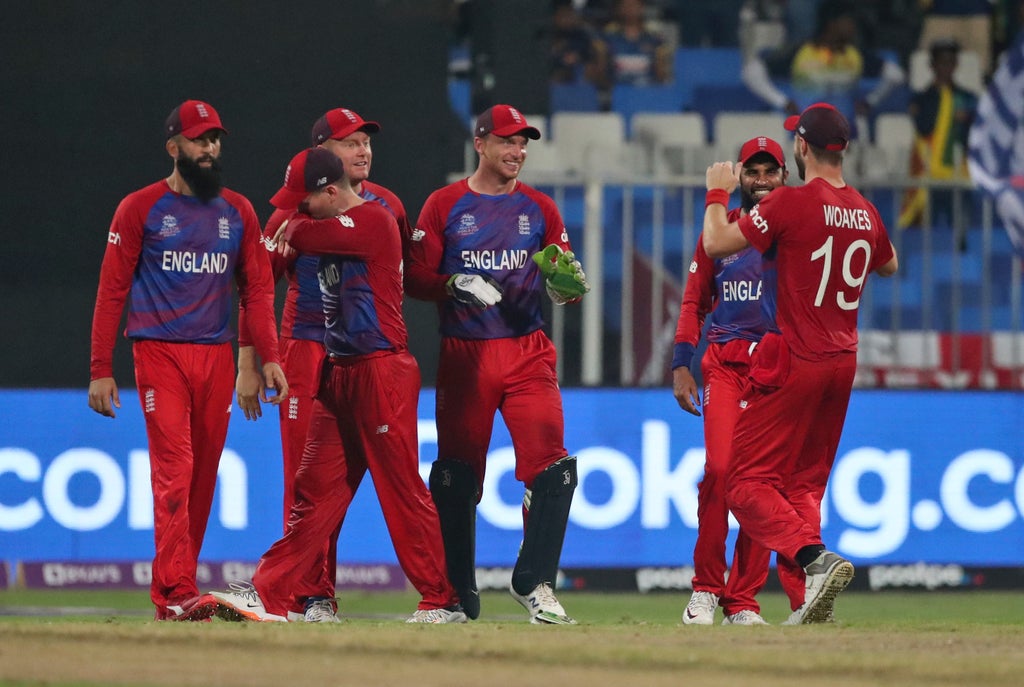 Jos Buttler revealed he took more satisfaction in an important run out in England’s T20 World Cup victory over Sri Lanka than he did in registering his maiden international century in the format.

England were asked to defend a total for the first time in the tournament following three commanding wins chasing and were indebted to an incredible 101 not out in 67 balls from Buttler in a total of 163 for four at Sharjah.

Sri Lanka stumbled to 76 for five in response, although England struggled amid heavy evening dew creating moisture on the pitch and the outfield, while they lost Tymal Mills to injury, necessitating a shuffle of their bowlers.

But Buttler threw down the stumps of Dasun Shanaka with a precision piece of fielding after Jason Roy and Sam Billings had combined on the boundary to dismiss Wanindu Hasaranga to snuff out Sri Lanka’s hopes of victory.

They eventually subsided to 137 all out after 19 overs on a memorable evening for Buttler, who became the first English male to record centuries in all three formats as his side all-but secured a semi-final spot.

“It’s something I’ll look back on at some point,” Buttler said. “I think there will be a few more guys who achieve that feat as well. But just looking at what it means for the team and for us in the competition, it means way more.

“I think the run out at the time was the best feeling on the field. We showed great character in the field, the conditions were tough, losing a bowler, guys stepping up, there was some great pieces of fielding.

“The level we have set in the field has been great throughout this tournament, we’ve saved a number of runs, we’ve created chances. That shows the selfless attitude of the group. The fielding is one thing you do for the team.

“The three matches before we’ve done what we wanted to do so here to be on the worse end of the conditions and to show the character we did, what it will do for us as a side is fantastic.”

England were initially bogged down on a tricky surface, labouring to 43 for three after 10 overs, with Buttler, who made a dashing 71 off 32 balls against Australia just two days before, and Eoin Morgan visibly struggling.

Buttler took 38 balls to get to 35 while Morgan was on nine off 20 deliveries at one stage but, in avoiding a collapse, England were well stocked with batters for a late-innings charge, which was kick-started in the 13th over.

Buttler needed only 22 balls to go from his half-century to his hundred, which he reached from the final ball of the innings after depositing Dushmantha Chameera’s low full toss for a leg-side six.

“I was just trying to remain calm and hope that he missed his yorker,” Buttler said. “I was a bit unsure where he was going to bowl but I’d been at the wicket for a long time.

“It was a fantastic feeling to get that ball away for six and get to a hundred. Hopefully there are still more good days to come but I certainly enjoyed this.”

Morgan ended a run of low scores with an important 40 off 36 balls in a 112-run partnership alongside Buttler as England moved on to eight points, which virtually guarantees their passage into the knockout stages.

Buttler added of his captain: “I thought he played fantastically well. The position he bats in in T20 cricket – form’s a bit of a myth but I think he showed an immense amount of character, he was very patient, he soaked up the balls and gave himself enough time to get used to conditions and we managed to put together a great partnership.

“It’s never easy coming in when we’ve lost wickets early on and there’s plenty of the game to go but I think he certainly enjoyed getting a few out the middle here and we’re all delighted when we see him play that way.”