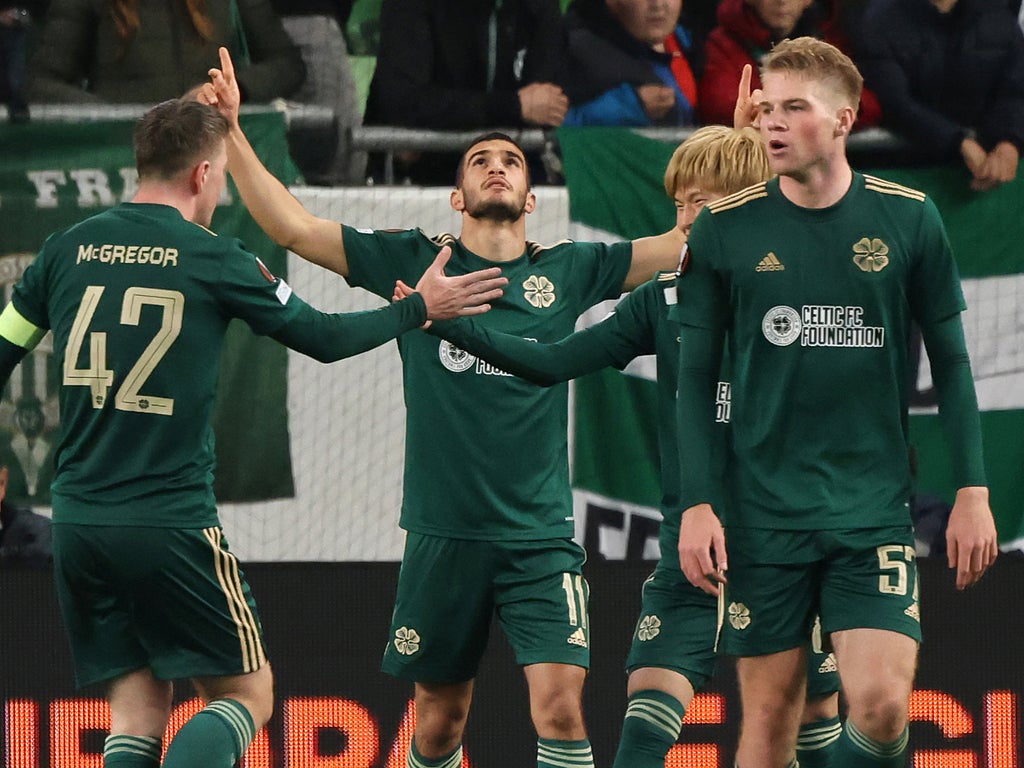 Celtic’s front three all scored in Budapest as Ange Postecoglou’s side secured European football beyond Christmas with a 3-2 win over Ferencvaros.

Celtic dominated and were ahead for most of the game with Kyogo Furuhashi, Jota and Liel Abada on target.

But Celtic secured a deserved victory to move on to six points in Europa League Group G following their second win over the Hungarians.

The worst Celtic will do is drop into the Europa Conference League but they have given themselves a chance of leapfrogging Real Betis, who are a point ahead.

Betis host Ferencvaros next while Celtic play Bayer Leverkusen, meaning the Hoops might need to take something in Germany to have a chance when the Spaniards visit Glasgow in the final group game.

Celtic, whose fans were locked out by Covid rules, were booed for taking the knee before kick-off but they silenced the home fans inside three minutes.

Abada won the ball when pressing high up the park and squared for Furuhashi, who fooled a sliding defender by feigning to shoot with his right foot before slotting home with his left.

Stephen Welsh had replaced the injured Carl Starfelt in Celtic’s starting line-up and overcame a difficult start when he slipped before making a recovering tackle, and was then booked for catching Oleksandr Zubkov’s face with the palm of his hand.

Abada also played a part in the 11th-minute equaliser, giving the ball away in front of the 18-yard line. The home side worked it across to Zubkov, whose attempted cross was closed down by Juranovic only for the ball to loop over Joe Hart and into the far corner.

Celtic regained the lead in the 23rd minute, seconds after Hart had saved an angled drive from Eldar Civic. Callum McGregor carried the ball forward and his pass was helped on to Jota by David Turnbull before the Portuguese winger cut inside and fired in off a defender and the post from 22 yards.

Hart made a stop after Myrto Uzuni got in behind Cameron Carter-Vickers but Celtic looked the likelier team to add to the first-half scoring, with Turnbull coming closest with a long-range effort that was held by former Hibernian goalkeeper Adam Bogdan.

Both sides hit the bar in the early stages of the second half, Tokmac Nguen with a swerving long-range effort for the hosts and Anthony Ralston with a header from Turnbull’s free-kick.

Furuhashi was denied by an excellent goal-line clearance after racing on to Turnbull’s through ball before setting up Abada for Celtic’s third on the hour mark.

Turnbull started the move by winning the ball back near the halfway line and McGregor then fed Furuhashi. The Japan international threaded the ball inside the home left-back and Abada dispatched a perfectly-placed finish inside the far post.

Postecoglou swapped his front three and James McCarthy came on for the injured Nir Bitton as the tempo dropped.

The home side set up a thrilling finale when Uzuni produced a brilliant curling finish after substitute Mikey Johnston had lost the ball.

Welsh also went off injured and Liam Scales came on to help Celtic over the line.