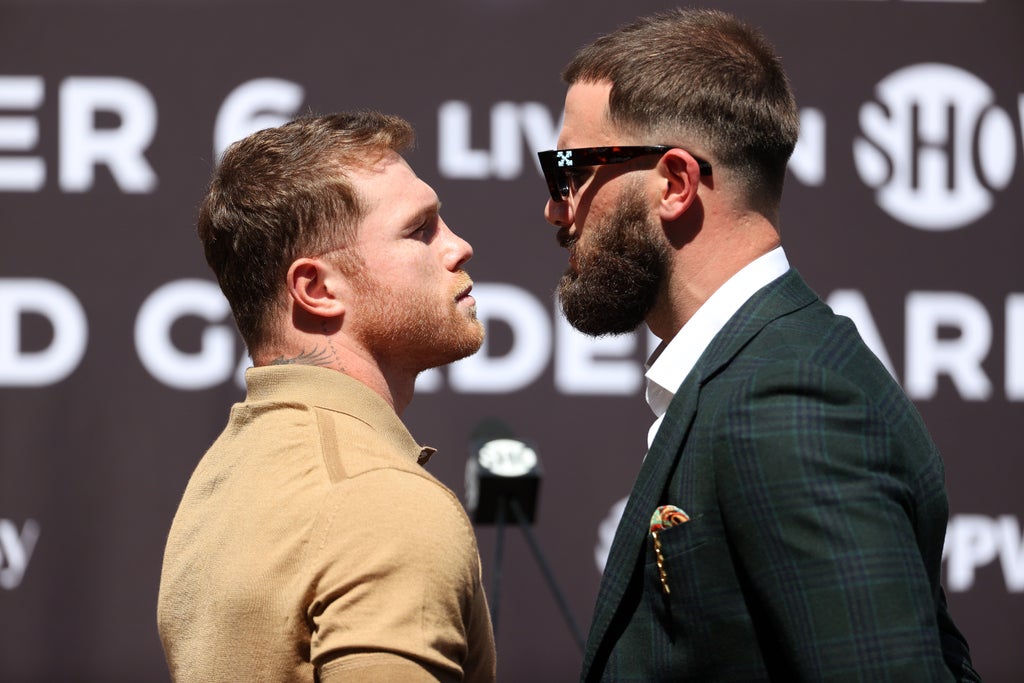 In Las Vegas the neon greets the people with pictures of lobsters the size of lambs, magicians with plastic faces and fighters with lightning eyes.

This Saturday at the MGM Grand Garden Arena, the now sacred green fighting beast on the Strip, two men from a very different world to the Las Vegas one they dominate, will fight and share a hundred million dollars.

Caleb Plant is from central Tennessee and started to fight in a ring without ropes, dancing and dreaming on a bare floor with taped lines for the imaginary square. Saul “Canelo” Alvarez fought to survive his Mexican childhood, to avoid hawking tissues on filthy busses and turned professional at just 15. And, yes, they always dreamed of the bright-light city.

Plant has the IBF title and Canelo the WBC, WBA and WBO super-middleweight version. The unification aspect is for history, the human story is what drives this fight.

Six weeks ago they had an ugly slapping scrap at a press conference, too much was said, shoulders and heads bumped and then the hands started to fly. Plant had a gash under his right eye and malice in his teary eyes; the frozen stare of Canelo turned angry. It was a rare clash where blood is drawn, the fight threatened and the two boxers pulled away with screaming, wide eyes. The hate was bubbling, it was certainly not a stunt.

It sets up Saturday’s fight perfectly. Anybody for real bad blood in Las Vegas? However, Canelo is already boxing’s No 1 attraction, earner and fighter. The trinity of belts is not that common, trust me. This is a man in the footsteps of Sugar Ray Leonard. Mike Tyson never owned the three.

Canelo had his first 12-round fight at 17, had fought 21 times by the time he was 18. He won his first world title in 2011, added others at three more weights, fighting across nearly two-stone and has met 20 world champions in 59 contests. He is not a throwback because there is nobody to throw him back to.

There is only one youthful blemish on the Canelo record; in 2013 he was outpointed by Floyd Mayweather in a night of calculated brilliance. On the night, Canelo was no match for the guile and arts of Mayweather and finished angry and frustrated. He also knew he would never get a rematch. It was the finest version of Mayweather.

In the last two years, Canelo has added to his fame and reputation with a series of wins that most modern boxers can only dream about. He moved to light-heavyweight and knocked out the great Russian, Sergey Kovalev. Then he won his three super-middleweight world titles with wins over unbeaten British champions, Callum Smith and Billy Joe Saunders. In the modern game of hype and deception, very few champions beat a trio like Kovalev, Smith and Saunders in their careers – Canelo did it in less than 18 months.

He also did it with a casual arrogance, which is one of his lingering contradictions: Canelo, you see, is a nice guy, but a very nasty fighter. And he is very dirty, considering any body part, alongside his fists, as a legitimate addition to any combination.

Both Plant and Canelo are trying to become only the sixth man since 1988 to hold all four of the modern and recognised world championship belts. There will be a slice of history in the MGM ring on Saturday night. It is only the ninth fight at all weights for all four; consider that statistic against the background of utter bedlam where there are currently over 80 world champions across the 17 or 18 weights. Plant and Canelo are in a very different game.

Plant is taller, younger, has longer reach, is unbeaten and will arrive in this endless city of odds as a substantial underdog. He also has heart, desire, drive and some dubious demons on his shoulders. He is fighting for wealth and survival, fighting in memory of his baby daughter who died in 2015 and his mother who was shot to death by the police In 2019. Plant has been hardened to his boxing life by the bad times he has known.

The stresses of a night like this, a night against Canelo, are not as daunting to him as the memories of the desperate times trying to save his daughter. He talks of trying to revive her, using mouth-to-mouth and trying to dial the ambulance in that awful twilight of death. It is the nasty stuff that can transform a fighter, make him utterly fearless. It made Caleb Plant and he has promised that attitude in the ring on Saturday; he has the genuine arrogance of a street-fighting man and there are the viral clips of him in street fights, jabbing and goading and running when a knife is pulled. Plant at 29 has lived a blood-stained life. He has the same type of life story as far too many boxers we have lost along the way. “I don’t brag about those days,” said Plant. “I don’t forget them either.”

Plant is not a walkover, not the designated loser created by the raw facts; he is not here just for the money. He fights with guts, he fights with pride and too many lose those necessary requirements as they walk to face Canelo. The cut cheek, the lack of respect and the odds against him have all touched his fighting heart. “I deserve more,” he said. He does, by the way.

Canelo and Plant both know about hardships and that clash – the one for pride – will be a personal battle as bitter as the fight for the four heavily jewelled and fur-lined belts the winner will leave the ring with. There is nothing fabricated about their animosity.

Yep, they are most certainly getting ready for a fight here in Las Vegas.