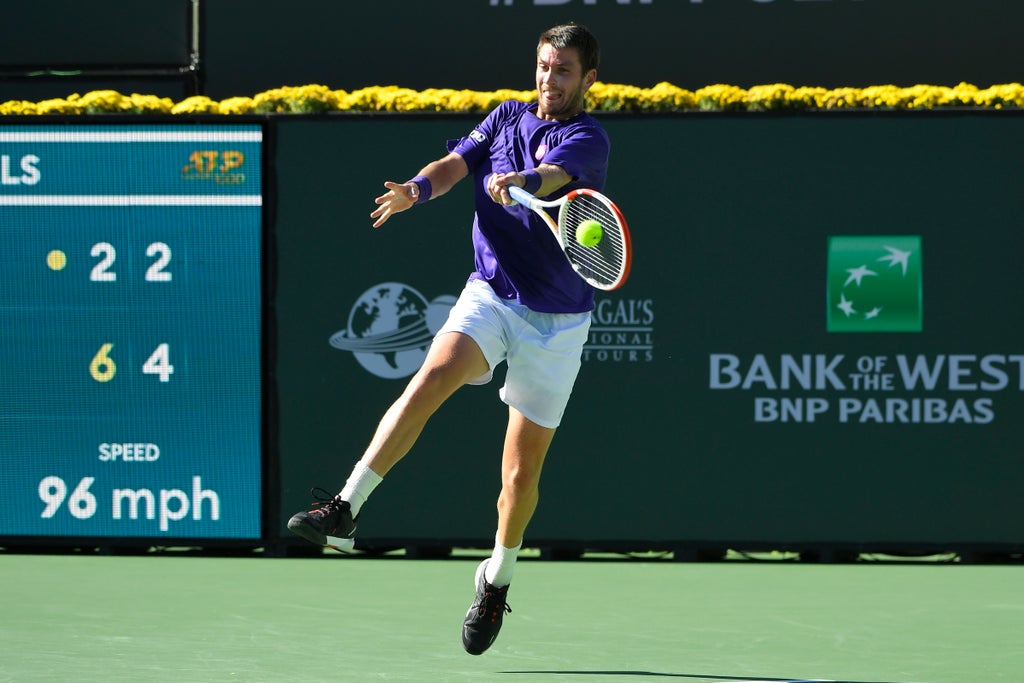 New British number one Cameron Norrie hopes his impressive run to the final of one of the world’s biggest tournaments this week can be the springboard for going deeper into grand slams next year.

The 26-year-old Norrie reached the final of the BNP Paribas Open at Indian Wells with an emphatic 6-2 6-4 win over Bulgarian Grigor Dimitrov and will meet Georgia’s Nikoloz Basilashvili in Sunday’s decider.

Norrie guaranteed the British number one ranking by thumping Diego Schwartzman in the quarter-finals and, having entered this tournament ranked 26th, is now certain to crack the top 20 after his semi-final win.

He has played the 36th-ranked Basilashvili once before, for a straight sets win in the first round at the Rotterdam indoor this year, and is likely to go into the final a narrow favourite.

But regardless of the outcome, Norrie is hoping to parlay his strong performance at this tournament – and an impressive year on the ATP Tour – into becoming a more dangerous player at the world’s big four tournaments next year, having never made it into a second week of a grand slam.

“I’ve had some opportunities there to make the second week of a slam, but it’s not gone my way,” Norrie told reporters after beating 28th-ranked Dimitrov in an hour and 26 minutes.

“It’s all been great learning for me. Hopefully with these results I can put myself in a higher seeding there, then maybe have some more chances.

“I’ve faced some pretty decent players this year in the third round (at the slams).

“Those experiences have been great for me, those big matches.”

Norrie suffered third round losses to Rafael Nadal at this year’s Australian and French opens, and to Roger Federer at Wimbledon.

But he has also enjoyed his finest year on the circuit, winning his first title on hardcourts at Los Cabos, Mexico, in July, and reaching four finals on three different surfaces, on the hardcourts of San Diego, the grass of Queen’s, and on clay in Lyon and Estoril.

Norrie is aiming to become the first British player to triumph in Indian Wells. He is the first Briton to reach the final at one of the ATP’s elite Masters events since Andy Murray in Paris in 2016, and is now beginning to occupy the same rarefied air.

He found himself in the unexpected position of being the highest-ranked player left in the tournament and victory over Basilashvili on Sunday would put him on track to qualify for the elite ATP Finals.

Norrie picked up where he left off against Schwartzman, racing through the first four games in a slew of unforced errors from his opponent.

“I was just going out there and playing my game and making the rallies long,” said Norrie, whose opponent caught Covid in the summer and had come through two lengthy matches to reach the semi-finals.

“Honestly, not once I was thinking about (making the final). When I went to serve for the match, I was like, ‘This is definitely a big service game here’. I was a little bit nervous. But I came out and I served great.”

Basilashvili reached the final by beating 39th-ranked American Taylor Fritz 7-6 (5) 6-3 in their semi-final.

“He’s an incredibly tough player, especially when he’s this confident” Norrie said of the Georgian. “He hits the ball big off both sides. He moves well. He’s a great athlete. When he’s confident, he can beat anyone. He’s super dangerous.

“It’s going to be difficult, but I’m feeling good physically and looking forward to getting out there. He’s looking good. He’s serving well. He’s being very proactive with his forehand. He’s looking dangerous.”