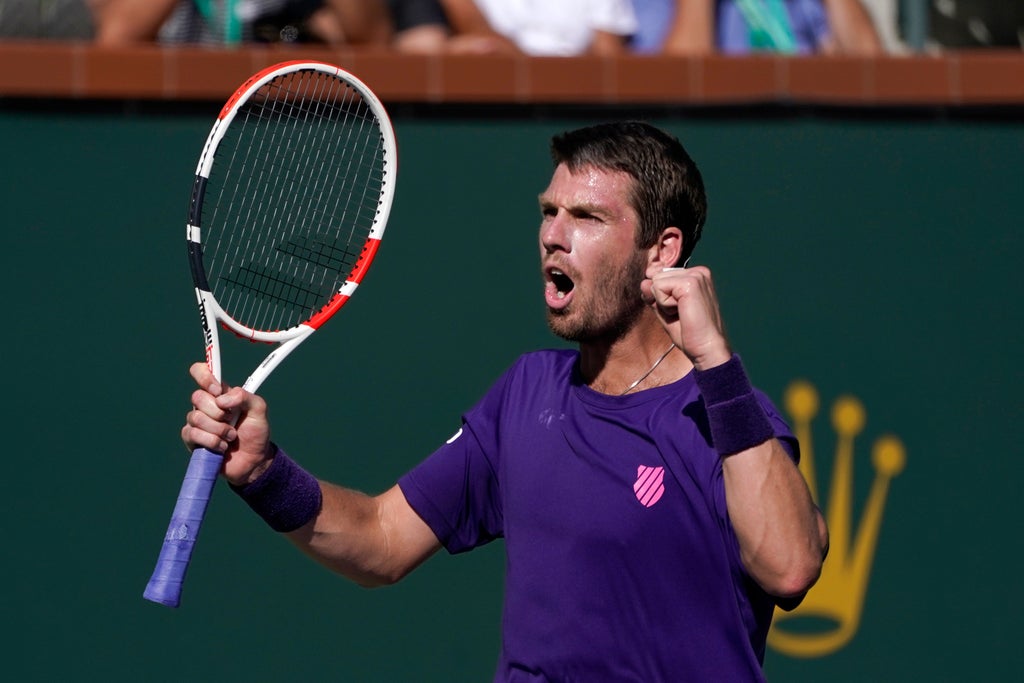 Cameron Norrie is a win away from one of the biggest titles in tennis after defeating Grigor Dimitrov to reach the final of the BNP Paribas Open in Indian Wells.

Having guaranteed himself the British number one ranking by thumping Diego Schwartzman in the quarter-finals, Norrie is now certain to crack the top 20 thanks to a 6-2 6-4 victory over Dimitrov.

Norrie will play Nikoloz Basilashvili in the final after the Georgian world number 36 beat 39th-ranked American Taylor Fritz 7-6 (5) 6-3 in their semi-final.

The finalists have met once before, at the Rotterdam indoor this year, with the Briton winning that first round match 6-0 6-3.

Norrie is the first British player to reach the final at one of the ATP’s elite Masters events since Andy Murray in Paris in 2016, and Norrie is now beginning to occupy the same rarefied air.

The 26-year-old found himself in the unexpected position of being the highest-ranked player left in the tournament and victory over Basilashvili on Sunday would put him on track to qualify for the elite ATP Finals.

Norrie, for whom this will be a sixth final of an extraordinary season, told Amazon Prime Video: “The match against Diego gave me a lot of confidence and to do it in that fashion, so I felt really good and really comfortable coming out today.

“I came out the exact same way, really physical, a lot of balls in the court and I was able to dictate with my forehand and pin him to the backhand side. I’m becoming more and more comfortable in Indian Wells. Biggest win of my career for sure.

“He made it difficult in the second set, he was slicing a lot and taking my legs away a little bit too but I managed to serve well in those games and get through them and I think it frustrated him a little bit so I think I had a really good game plan.”

Norrie is aiming to become the first British player ever to triumph in Indian Wells, and he added: “Hopefully I can bring the same level tomorrow and let’s rest up and enjoy tonight’s win.”

Dimitrov has struggled since catching coronavirus last summer but the Bulgarian had been in fine form in the Californian desert, posting victories over US Open champion Daniil Medvedev and Hubert Hurkacz.

Both were lengthy encounters and there were major question marks over how he would deal with the relentless physicality of Norrie’s approach.

The early answers were not promising as Norrie picked up where he left off against Schwartzman, racing through the first four games in a slew of unforced errors from his opponent.