We should be talking about the phenomenal achievement that was Bristol Rovers overturning a five goal deficit to surmount Northampton Town on goals scored to finish third and secure automatic promotion to League One.

The Pirates made an immediate return after finishing 24th last season in League One but the fact they had not been in the automatic promotion places all-season or the nature of their win pails to insignificance after the actions of some ignorant and intolerable fans.

Let me be clear before I talk about the pitch invasion, it is by far not the worst thing football fans have done and no one will be able to argue otherwise but the stupidity and jeopardy that it could have put the club in, make it clear to me that it should be addressed.

Why did the Bristol Rovers fans do it?

I understand the highs and lows of football fans, who travel all around the country to follow their side, particularly in a season of relegation, and as a matter of course the fans are rightfully elated that their stay in League Two was only one season but there were still five minutes left of the match.

Football can provide some amazing results and moments and the fans are a key part of it, think back to only last week and the buoyant atmosphere that the Villarreal fans had after taking a 2-0 lead against Liverpool. What is key to note is that the Spanish fans had a positive effect on their team whilst the Bristol Rovers fans could have spelt trouble for the club.

When Elliot Anderson, the Newcastle loanee, scored to make it 7-0, the Northampton vs Barrow match was still in jeopardy with a goal for the Cobblers being able to revert the order once more. Also, whilst unlikely, there was still time for Scunthorpe to score a surprise goal.

The Bristol Rovers fans rushed onto the pitch with five minutes left and their invasion meant the game had to be stopped for sixteen minutes a threat of postponement was made by the referee should another incursion onto the pitch occur.

Not only did the invasion ruin the drama of the end of the game it also put them in danger of becoming a side that had prematurely invaded only to be crushed by reality, (Scarborough in 1999, before the Jimmy Glass goal and Reading FC fans who invaded the pitch in 2014 when they thought they had made the playoffs.)

It just seemed like an over-reaction because of the situation, as the late great Brian Clough once said “it only takes one second to score a goal.” Especially when you think about how much the club could have lost if the invasion had gotten out of hand and the punishments that would likely have been dealt.

Hopefully, for the sake of the Bristol Rovers fans, the EFL will see it as a bit of overexcitement and not punish the club for the transgression, it is of my opinion that some form of fine will be levied on the club as a result of this though.

The nature of the pitch invasion

Most pitch invasions are calmed down in a matter of minutes as the fans are moved back to their seats, or there is no need for the fans to be controlled because the match is over.

In this case, neither of these things happened, the players were ordered off the pitch by the referee into the changing rooms, the stadium announcer calmed for calm over the tannoy and Bristol Rovers manager Joey Barton called for calm and a return to seats.

(You know you are out of control when Joey Barton is telling you to calm down.)

The disappointing thing is that this is a common occurrence at the memorial ground with the club having to release a statement to condemn Bristol Rovers fans invading the pitch after a 0-0 draw with Forest Green Rovers, which saw their visitors and eventual champions seal promotion to League One. (23rd April 2022)

The invasion today meant that riot police had to be brought in to protect the players from another invasion as the club desperately tried to get the match finished without the further incident.

Why focus on the pitch invasion?

Many reading this will ask, surely the fans have the right to be excited, they have overcome all the odds after being 16th in December, to claiming promotion in possibly one of the most remarkable games of the season.

My issue is that it could have seen the referee abandon the game and cause a whole host of disputes regarding the legitimacy of the suspension of the game. Bristol Rovers fans (their 12th man) could have stopped their side from being promoted because of them entering the field of play.

Furthermore, they need to have some humility and show some respect to Scunthorpe, this is a side that was bottom, relegated on the 15th of April and were playing mostly youth players against one of the most in-form sides in the country. To invade the pitch before the match was done was incredibly disrespectful to a club who have suffered greatly this season.

The fans were wrong and intolerable and could have caused damage to their own club, the exact opposite of what a Football fan should be. It paints a bad light on English football fans and adds to the stereotype of football fans being thugs and irresponsible, to have a match called off and the players have to return to the dressing room because of a premature celebration is ridiculous and quite laughable.

Whilst it has very little impact on many neutral fans, I can’t help but think that many fans were hoping for a fourth Northampton goal or a shock Scunthorpe goal which would have put the proverbial egg on the faces of the fans who were careless enough to invade the pitch.

A moment for Northampton

Northampton Town will be reeling from this chance snatched from them and will have to bounce back quickly against Mansfield, in order to book their spot in the play-off final at Wembley.

For a club who did what they thought was enough (win by two goals and forced Rovers to win by seven) the 45th-minute consolation from Barrow will now be a very bitter pill to swallow.

As G. Michael Hopf once said “hard times create strong men.” and there are very few things in football as hard as having a chance of promotion snatched away from you with the constant reminder of being stuck in the same league next season, Northampton Town will be desperate to avoid this fate.

While it is a glorious time for any club, from the players, manager, fans and all the other staff that make the club tick, the actions of some careless fans made the experience one that was rather soured, whilst Bristol Rovers fans will remember the 7th May 2022 and their promotion as a miracle win, I fear many other fans will remember this game, not for its incredible scoreline but the intolerable and stupid invasion that threatened the very legitimacy of this result. 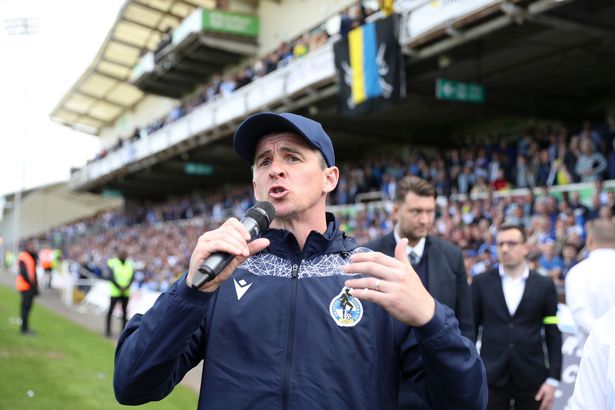