PREMIER League star Yves Bissouma has been bailed after being arrested and marched out of a nightclub in the early hours of Wednesday.

The in-form Brighton midfielder, 25, spent the day in custody after being arrested in the city.

Shocked revellers told how they saw Premier League ace Bissouma being marched out of a packed nightclub in handcuffs by police officers.

A spokesperson said: “A man in his 40s and a man in his 20s, both from Brighton, were arrested and have been released on conditional bail until November 3 while enquiries continue.”

The Brighton midfielder — who has been linked with a number of big clubs including Liverpool, Manchester United and Arsenal — had been partying with a pal in the early hours of Wednesday when cops were called.

Bissouma, a likely big-money target in the upcoming January transfer window, was then detained by officers at popular city venue The Arch before being led away in handcuffs at around 2am.

An insider said: “The club was packed — it was a popular student night, especially with freshers in town.

“People were starstruck to see Bissouma in the club — he’s Brighton’s best player at the moment, so he definitely caught some eyes.

“They were even more shocked to see him later being led away in handcuffs outside the club.”

Bissouma, wearing a check shirt-style hoodie, was filmed by onlookers on the Brighton seafront being led away by two police officers.

His friend, who is in his 40s, was also arrested.

The insider went on: “People were absolutely stunned by what was going on. The next thing we knew, two police officers were taking him away in cuffs. I couldn’t believe it.”

Sussex Police confirmed on Wednesday that a man in his 20s and another in his 40s had been arrested “in the early hours”.

At that time they were still in custody being quizzed by police.

Witnesses say they had been at The Arch for “a couple of hours” before an alleged incident at around 1.30am.

You looked at him and he really does look like a top-quality player.

The nightclub was hosting a weekly promo night popular among students.

Bissouma, on £45,000 a week, has been one of Brighton’s top performers this year, helping them soar to sixth in the Premier League table — just two points off the leaders.

Last month he declared his aim to be the best in the top flight.

Asked who was the Premier League’s top midfielder, he told BBC One’s Football Focus: “I don’t want to be arrogant, but it’s me because in my head I am working to be the best. So I cannot say another name.

“I know in the Premier League there are so many good midfielders, but for me, it’s me because that gives me the confidence and the energy to work hard to show people I am here and I am Bissouma.”

The player — born in the Ivory Coast but now a Mali international — signed for the Seagulls from French side Lille in 2018 for a reported £15million.

He scored his first goal for the club against Bournemouth in the FA Cup third round in 2019. Bissouma has since attracted the attentions of a clutch of Big Six clubs with a string of impressive performances.

One against Everton last season had Sky Sports pundit Jamie Carragher raving he was “the best player by a mile on the pitch”. He added: “You looked at him and he really does look like a top-quality player.”

Match of the Day host Gary Lineker has called him an “exceptional footballer”.

Among his highlights was a 30-yard strike he netted against Everton in October 2020, which won him the club’s Goal of the Month award.

Brighton had to fight tooth and nail to keep him over the summer amid fierce interest, and he started this season equally strongly before picking up a knee injury.

It kept him out of the 0-0 stalemate at home to Arsenal last Saturday evening.

He also missed the 1-1 draw at fierce rivals Crystal Palace on the Monday night before. He has been tipped to leave the club when the January transfer window opens.

Brighton manager Graham Potter has branded his 6ft star “unique”, saying he “does not have a direct replacement” for him.

The matter is subject to a legal process and the club is therefore unable to make further comment at this time.

Bissouma also previously told of his pain at leaving his parents in the Ivory Coast when he was 13 to go to a football academy in Mali.

He told The Guardian: “It was hard to leave my parents because I’ve always been very devoted to them.

“But I said to myself, ‘Maman and Papa have done their best for me, now I have to show I am a man and fight to achieve’.”

A club spokesman said: “Brighton & Hove Albion are aware that one of its players is assisting police with the investigation of an alleged offence.

“The matter is subject to a legal process and the club is therefore unable to make further comment at this time.”

The Arch did not respond to a request for comment. 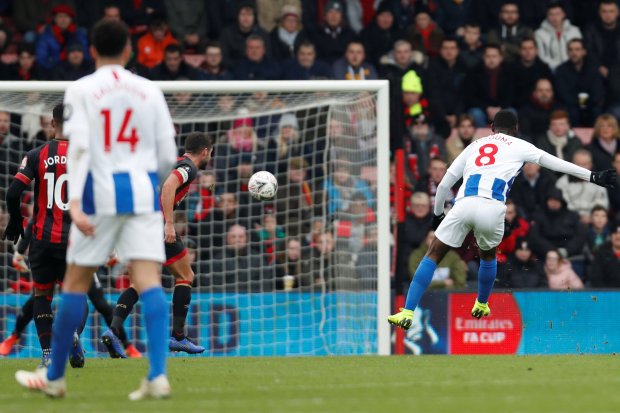 AUGUST 30, 1996: Yves Bissouma is born in Issia in the Ivory Coast in West Africa.

2009/10: He leaves the country on his own at the age of 13 to join French football coach Jean-Marc Guillou’s academy in Mali, also West Africa.

2015: He makes his international debut and has so far played 19 times for Mali, scoring three times.

2016: Moves to French side Lille, playing for their reserves. He makes 14 appearances and scores three goals.

2017: Bissouma breaks into the Lille first team when they were in Ligue One. Made 47 appearances and scored three goals.

2018: He moves to Brighton & Hove Albion for £15million on a five-year contract. Has played 91 games and scored twice.

2021: Linked with big-money move to one of the Prem’s Big Six sides.

OCTOBER 6, 2021: He is arrested while clubbing with a pal in Brighton.