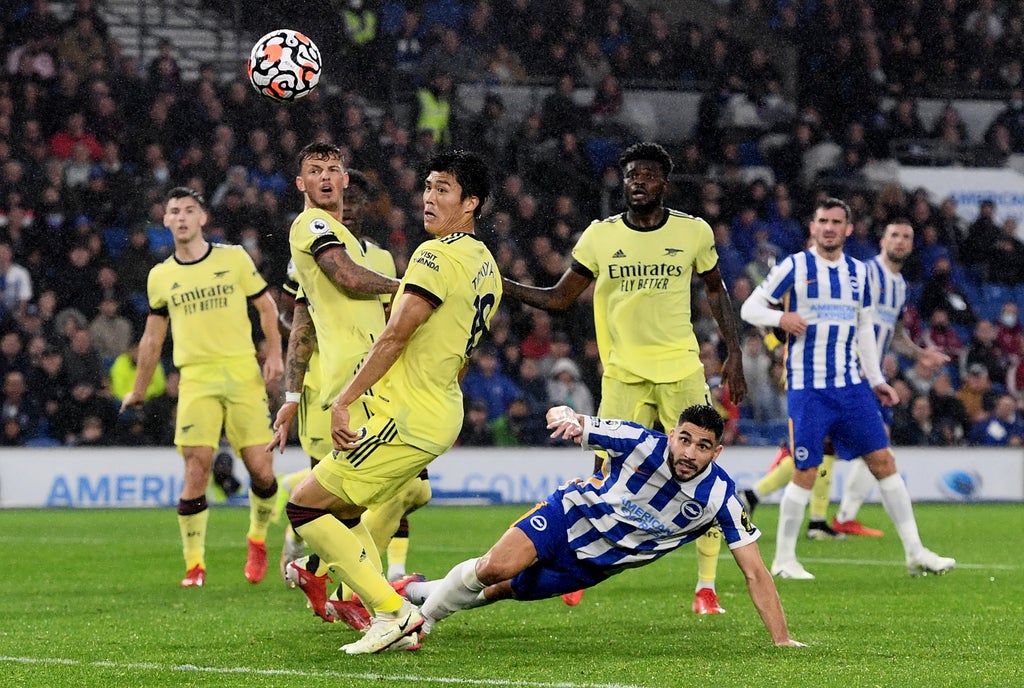 Albion edged a rain-soaked encounter at the Amex Stadium but managed just two attempts on target as Leandro Trossard, Dan Burn and Neal Maupay each failed to capitalise on decent openings.

Pierre-Emerick Aubameyang headed against the outside of a post for the uninspiring Gunners, who were denied a fourth victory on the bounce having begun the campaign with three successive defeats.

The Seagulls sit fifth with 14 points from seven games, with Mikel Arteta’s visitors four places and as many points further back.

Both sides came into the game on the back of morale-boosting results against their fiercest rivals.

Arsenal secured a thumping 3-1 over north London neighbours Tottenham last Sunday, while Albion dug in to scrape a last-gasp 1-1 draw at Crystal Palace the following evening.

Those fixtures came at the cost one enforced change apiece. Albert Sambi Lokonga replaced the injured Granit Xhaka in the Gunners’ midfield, while Albion brought in Jakub Moder for the sidelined Danny Welbeck.

Arteta’s men initially began the brighter and went close in the 23rd minute when Aubameyang grazed the left upright from an acute angle.

But it was Brighton who were far more threatening in the opening 45 minutes.

Gunners defender Ben White – returning to the south coast for the first time since his £50million summer departure – had to be alert to prevent Trossard turning home following slick build-up play from Pascal Gross, Maupay and Adam Lallana.

Albion head coach Graham Potter would no doubt have been pleased by the pattern of play but disappointed that none of the attempts tested Aaron Ramsdale.

The Gunners’ England goalkeeper had earlier looked vulnerable when he fumbled a Maupay cross under pressure from Shane Duffy before being relieved to receive a free-kick as the stretching Lewis Dunk blazed over the gaping goal.

Arsenal began the second period with renewed purpose, yet there was little sign of the stalemate ending.

Arteta responded by introducing Nicolas Pepe – who scored three times in his last two outings against Brighton – in place of the ineffectual Martin Odegaard, while Aubameyang was later withdrawn in favour of Alexandre Lacazette.

Lacazette and Thomas Partey combined to send Emile Smith Rowe racing towards goal in the 76th minute but his low effort was turned behind by the legs of Albion keeper Robert Sanchez, with Pepe calling for the ball to be squared across goal.

Buoyed by the home crowd, Albion were ending in the ascendancy.

Ramsdale intercepted March’s header across goal with Maupay lurking for a tap-in, while Duffy nodded wide from a corner.

Moments later, centre-back Duffy survived a brief scare late on when Smith Rowe went to ground easily in the box. The incident produced an animated response from Arsenal boss Arteta but match official Moss was not interested.

Duffy then tumbled in the opposite 18-yard box under a challenge from Gabriel Magalhaes in added time. VAR reviewed the tangle before opting not to intervene as a dull contest ended in deadlock.