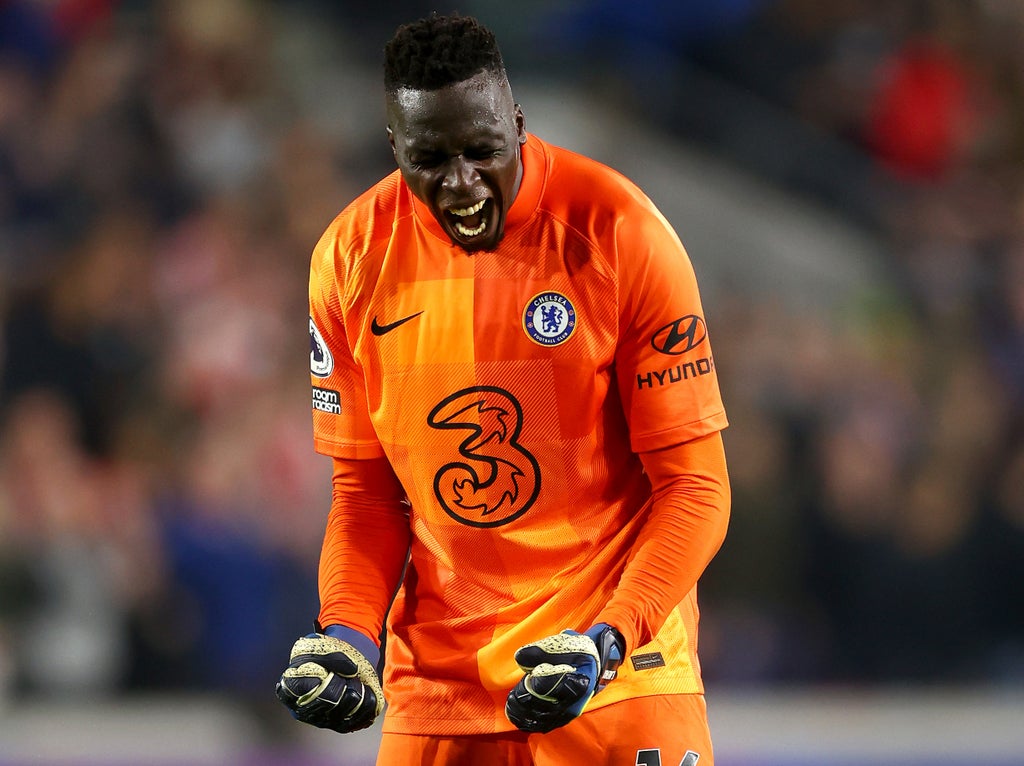 The question usually asked after a team loses a game 1-0 after having 17 shots to their opponents’ one is how they did not score. But after Brentford finished on the wrong side of this coin, with Chelsea digging deep to register a sixth win of the season to move top on Saturday evening, no one who left the Brentford Community Stadium did so without a clear answer.

Edouard Mendy was why Brentford were left empty-handed. The Senegalese goalkeeper, so often an unsung hero of this Chelsea side, carried the team on his back to ensure three points were kept safe in the face of a relentless red and white wave. Mendy’s six saves, four of which came in the final 20 minutes, were a mixture of incredible reflexes and fearlessness, judging every angle to thwart and frustrate.

Ben Chilwell described those final 20 minutes as “hell on earth”. Ultimately, he was the reason the ordeal was worthwhile: his immaculate half-volley the only goal of this encounter, picked up at the end of a first half where Chelsea had done most of the bidding. Quite a contrast to how things ended up.

This was Chilwell’s third goal in as many games, starting with his strike against Southampton a few weeks ago and then his first England goal against Andorra. Even so, his volley was another nod to how this Chelsea side have threats all over – the left-back one of 12 different goalscorers in the league this season. Simply put, an unfamiliar source gave Chelsea the lead and a familiar performer in Mendy kept it safe.

Without usual sparring partners Fulham and Queens Park Rangers, who squared off earlier in the day in the Championship, the visit of Chelsea was a new slant on a west London derby for Brentford. Beyond previous meetings in the FA Cup in 2013 and 2017 (both won 4-0 by Chelsea), their last league meeting was back in March 1947.

Here we were, some 74 years later, these teams and the worlds around them so very different. And no doubt Brentford were the ones in the midst of the bigger shift. Nevermind that they were hosting the defending European champions, or doing so as Premier League peers. To be as high as seventh coming into this fixture after a late 2-1 victory over West Ham prior to the international break was a sign that top-flight life suits Thomas Frank and his players. Going up against Thomas Tuchel’s side was to be the sternest test of their credentials to date.

They went at Arsenal for that first win on the opening day of the season and did similar against Liverpool in a compelling 3-3 draw. However, that same tenacity seemed lacking on Saturday night, perhaps because of the two-week hiatus. The questions around how bad Chelsea’s injuries worries were at the back was answered with a first ever league start for Malang Sarr and not one centre-back on the bench.

Chelsea dominated the ball in the first half and Brentford were unable to summon the necessary energy to hassle it off them.

That, in part, was down to another strong performance from Ruben Loftus-Cheek. A second consecutive start for the 25-year-old saw him in a midfield three that matched the home side’s shape in the first half. His nimble footwork and drives forward meant Chelsea were rarely caught flat-footed. N’Golo Kante and Mateo Kovacic either side offered similar remedies to the Bees’ swarm.

It was Brentford, though, who rang the first alarm. After 20 minutes of one-way traffic, a deep cross to the back post from Sergi Canos was knocked down by Christian Norgaard to Bryan Mbeumo. The Frenchman struck the near post under pressure.

With that, the game picked up pace. In fact, the counter-attack that emanated from Mbeumo’s effort saw Romelu Lukaku find the back of the net, albeit from an offside position after Timo Werner had squared across.

As the match became more back-and-forth, so came the goal. A recycled move from the left resulted in neat interplay between Kante and Cesar Azpilicueta. The captain lifted a cross into the middle, where Lukaku had occupied two defenders. Though he wasn’t able to get his shot off, Chilwell’s more advanced positioning allowed him to profit from a bouncing ball and fire home.

The reaction from Brentford after the break was as loud as it was expected. Beyond playing quicker and committing a few extra men forward, there was a clear move to get Ivan Toney more involved.

Isolated in the first half, he was a more visible presence in the second, dropping back and to the left to involve himself in build-ups. He should have had his first effort on goal after a neat one-two with Canos that seemed to have given him an opening, which he tried to pass on to second-half substitute Marcus Forss.

He did eventually register one in that column with an effort at the near post, which Mendy clawed away. Mbeumo then struck the post for a second time after Norgaard’s clever chipped through ball on the edge of the box.

As the volume increased in the stands, so did the freneticism. Toney probably should have been awarded a penalty when he was caught in the face by Trevoh Chalobah. He was adjudged offside, but replays seemed less than convincing.

From 83 minutes, the dial was turned up to 11 – both on Brentford’s desperation and Mendy’s display. Toney’s ball to the far post found Saman Ghoddos free, though his options on goal were narrowed when Mendy rushed out to meet him.

A couple of minutes later, Mendy was wearing one in the face when Pontus Jansson’s size 15s struck a volley off the goalkeeper’s cheek. The resulting scrap saw Sarr clear an effort off the line. Never was it more apparent that Chelsea were holding on.

The final save came in the four minutes of added time, as Norgaard tried for the spectacular with an overhead kick and Mendy responded accordingly to tip over the bar.

When the full-time whistle came, Brentford’s players dropped to the turf in exhaustion. By contrast, those in red and white in the stands rose to their feet to applaud the effort of their players.

Some 10 minutes after full-time, the home players were still on their post-match lap of honour. A rare sight after a defeat, but one that needs to be seen in context: not just of how far Brentford have come, but of the graft of their performance. And, ultimately, the brilliance of Mendy.