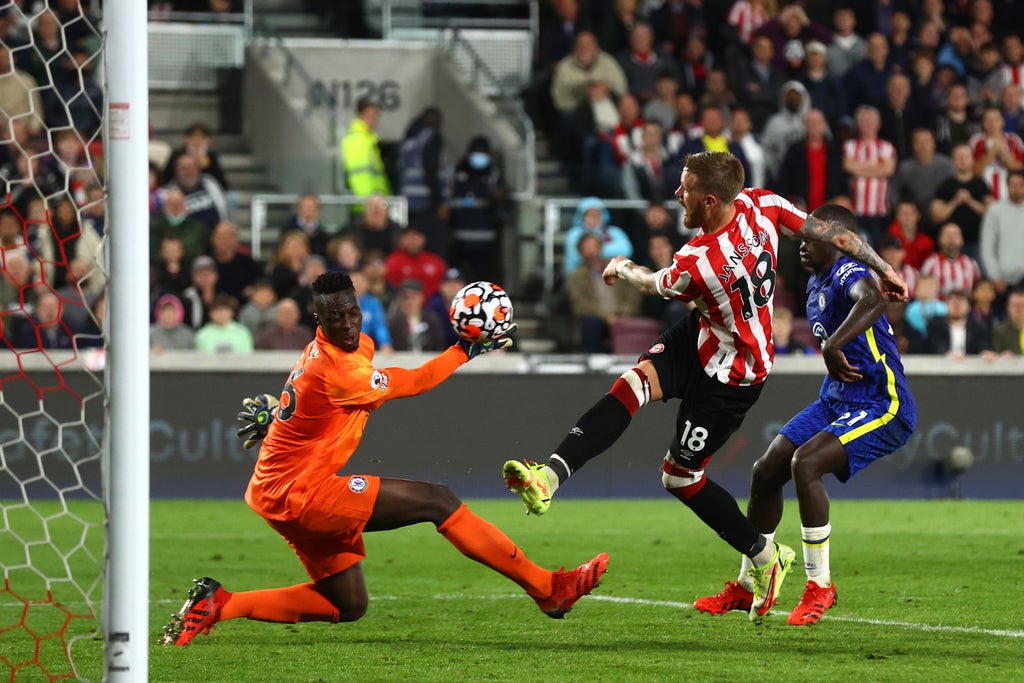 Chelsea had goalkeeper Edouard Mendy to thank as they held on to claim a narrow win over Brentford and return to the top of the Premier League table.

Brentford had the first chance to open the scoring when Bryan Mbeumo struck the post following a corner but Chelsea were able to subdue their west London rivals and assert their control.

Romelu Lukaku had a goal disallowed for offside before Timo Werner spurned a good opportunity, but it was Ben Chilwell, making just his second Premier League start of the season, who gave the Blues the breakthrough when he struck a controlled volley into the net on the cusp of half-time.

Brentford increased the pressure on the European champions in the final 15 minutes, with Mendy making four key saves – the pick of the bunch a stop with his face to deny Pontus Jansson from close range and a fingertip save from Christian Norgaard’s overhead kick.

Here are how the players rated at the Brentford Community Stadium.

Made four huge saves in the second half to earn his side their clean sheet, with the point-blank save to deny Pontus Jansson the best of the bunch. After having very little to do in the first half, Mendy was key to his side’s win.

A quiet display from the Chelsea captain, with very little involvement in Chelsea’s attacks from wing-back, especially when compared to Chilwell on the other side.

Solid, both on the ball and defensively, but seemed to be a little rattled following his tussles with Toney. Played an important role in Chilwell’s goal after winning the ball back and keeping the move alive. Made a goal-line clearance late on as Brentford increased the pressure.

Controlled the backline well and did a good job in his battle with Toney.

A fine first-half performance from the Premier League debutant, but a slightly uneasy second half. Made a good recovering tackle on Mbeumo and generally was able to cover the Frenchman’s runs into his channel.

Gave Chelsea the breakthrough with a superbly taken volley – his third goal in as many games for club and country. Seemed to grow in confidence after the goal and made a terrific driving run from deep. Delivery from open play and set-pieces found Raya too often, though.

Made a very promising start but disappeared after Kovacic was substituted as Chelsea lost control. Showed lovely touches and shifts of movement on the ball in midfield and characteristic carries forward.

Grew into the game as it went on and had a couple of quality moments on his return to the team following his Covid isolation.

Of the three Chelsea midfielders he was the most assertive in passing forward into the strikers, including a lovely clipped ball into Werner. Chelsea lost some of their control following his substitution in the second half.

Bright on the break, but the final ball eluded him, particularly when he had an opportunity to shoot across Raya but instead elected to square to Lukaku and played it behind him.

Played a role in Chelsea’s opener by occupying Jansson. Got into a couple of goalscoring positions but either strayed offside, like for his disallowed goal, or the service was missing.

Impressed with his distribution and collections from crosses.

Struggled a little bit with Werner’s runs into his channel.

Stuck tight to Lukaku and looked comfortable with the physical battle when the play was in front of him.

Important in the second half in progressing the ball from left centre-back.

Had little influence on Brentford’s attacks and struggled to get forward from wing-back. Perhaps was pushed back by Chilwell.

The least effective of Brentford’s midfield three and was taken off midway through the second half.

A classy player on the ball. He held his own in a tough midfield match-up.

Did well to set up Toney with a firm pass to the edge of the box. Struggled defensively against Kante.

Not his most effective match but showed his quality and importance to Brentford with his driving runs on the left.

Brentford’s biggest threat and was unfortunate to not get on the scoresheet after twice hitting the post. Was a nuisance for Chelsea with his runs in behind.

Had a quiet first half but came to life after the break, as if inspired by his tussle with Chalobah. Forced Mendy into a good reaction save, but it was disappointing to see him turn down the opportunity to shoot on a couple of occasions.