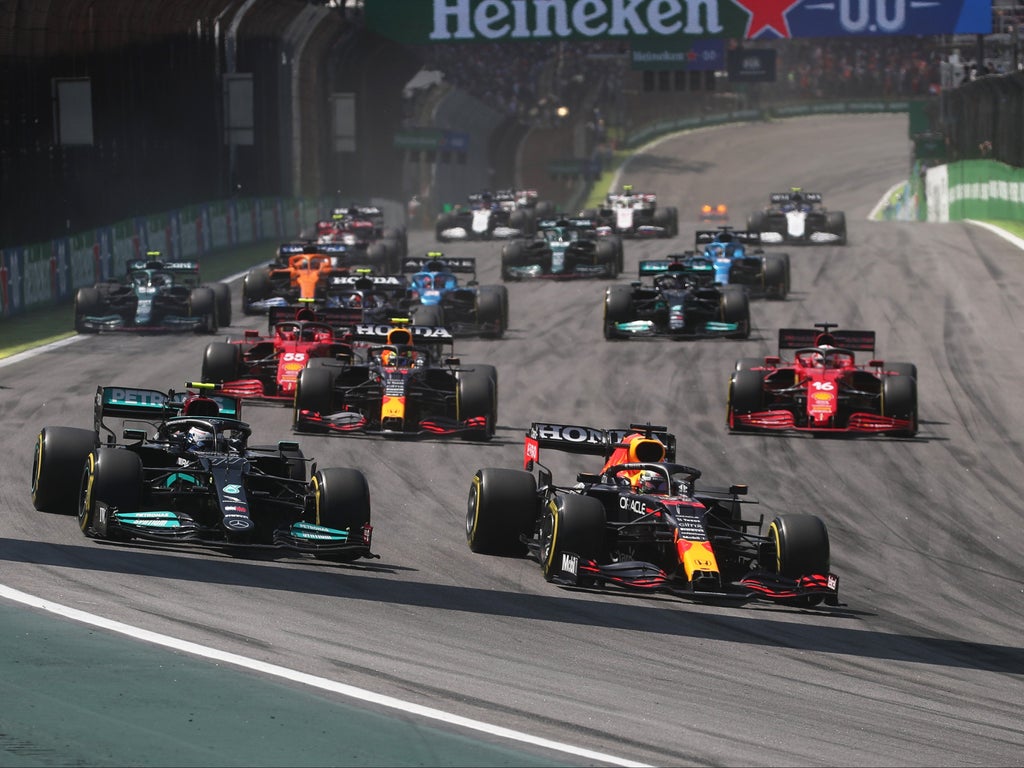 Lewis Hamilton faces another uphill battle to get himself back in the title race for 2021, after being handed a five-place grid penalty for today’s Brazilian Grand Prix. But the seven-time world champion defiantly told Max Verstappen: “It’s not over yet!”

But the Red Bull star now leads by 21 points after the Dutchman secured second in the sprint qualifying, adding two more points to his total. The reigning champion’s last race victory came in Russia back in September – since then, his Dutch rival has won twice – but the seven-time champion showed immense pride to rally from his setback on Saturday starting last after a technical infringement was found on his Mercedes, eventually claiming fifth – though that translates to 10th on the grid due to a five-place penalty after using too many engine parts.

Both Hamilton and Verstappen were investigated by stewards with the Red Bull star ultimately fined €50,000 for touching Hamilton’s car in the parc ferme.

Hamilton, whose teammate Valtteri Bottas will start first, said: Hamilton said: “I am overwhelmed with it. I definitely wasn’t expecting that. You never really know whether overtaking is going to be possible on a track like this but the long straight enabled us to progress faster and the car was really great. I think it was really the mental state of mind that I went in was really just never give up keep pushing. Still I rise, you can do this. Because it was really difficult to swallow the result we got but we won’t let that hold us back.”

Follow live updates of the Brazilian Grand Prix below:

Hamilton has another go at getting past Verstappen…

He can’t quite manage it.

AND GETS THE OVERTAKE! HAMILTON LEADS!

Hamilton is told that the FIA won’t investigate the incident.

“Of course,” or “I thought so,” the defending champion replies – it’s hard to hear the team radio clearly.

The FIA has said no investigation is necessary.

Technically, the incident isn’t under investigation for sure…

It’s been noted by the race stewards, but that’s not the same thing.

Mercedes tell Hamilton that the incident will be investigated.

The question is whether Verstappen stopped turning through the corner, failing to allow Hamilton space to overtake.

Meanwhile, Stroll is out of the race after his earlier damage.

Both drivers go off the track in fact, before coming back on with Verstappen still in the lead!

Hamilton, in second behind Verstappen, steals fastest lap so far from Perez.

Not for the first time this season, the Briton seems displeased with Mercedes’ strategy.

Verstappen climbs into second, then first as Hamilton pits after he’s told: “Look after the tyre.”

“Box, box,” is the call from Red Bull, and Verstappen takes to the pits.

The Dutchman is then caught behind Latifi on the way out of the pit lane, costing him a bit more time!

Verstappen drops to fourth. Hamilton out in front.